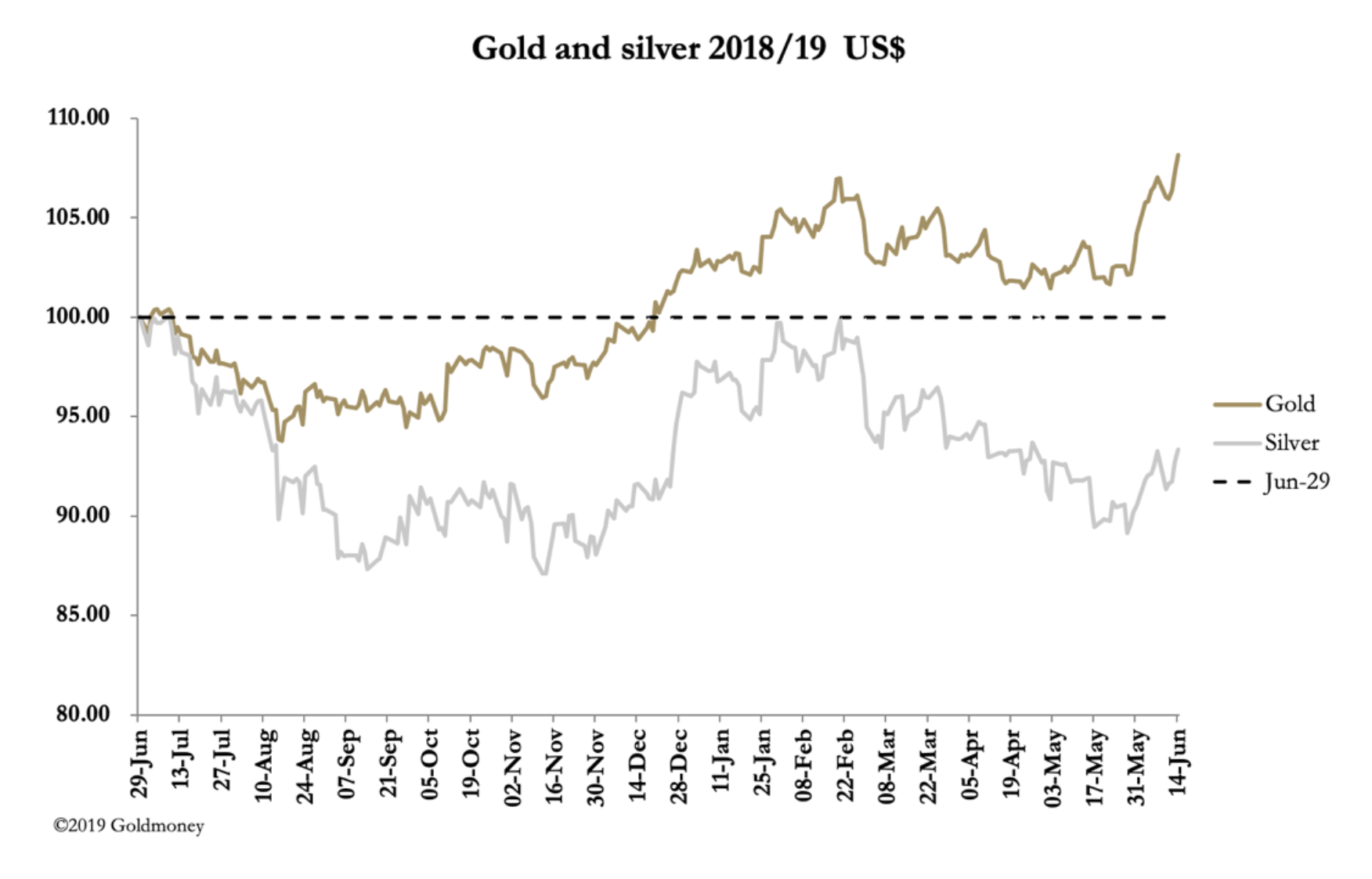 Gold performed strongly this week, rising $15 from last Friday’s close to trade at $1355 in European morning trade today. Gold’s strong performance is dragging a seemingly reluctant silver up from mid-week lows for a net gain of only a cent or two on the week at $15.03.

Silver appears to have been left badly behind, as the next chart of the Managed Money category on Comex shows. 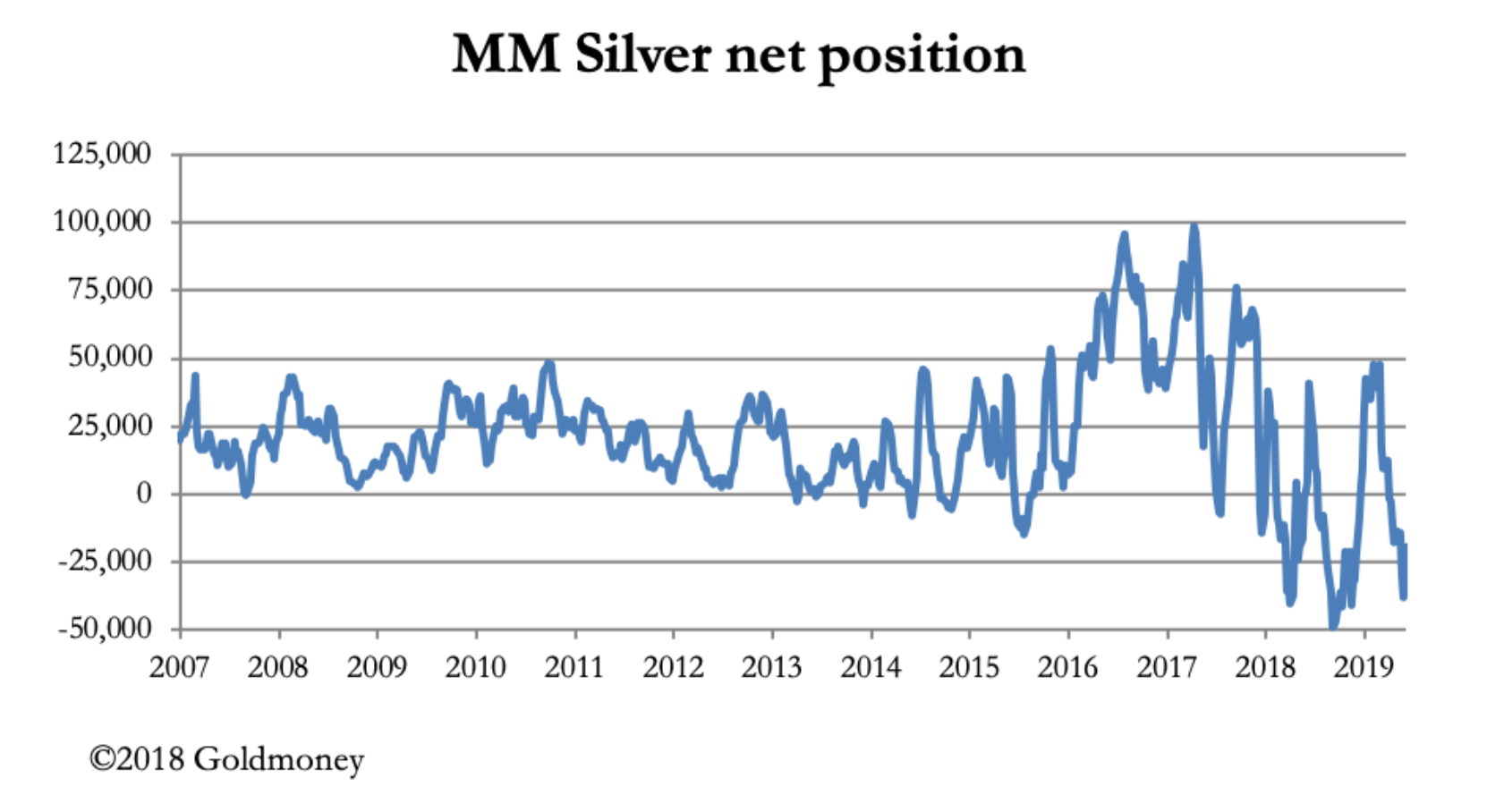 While gold registered a neutral position at 4 June (the last available COT figure – update due this evening), silver is still close to being record oversold. Should gold’s strong performance continue, this suggests that a spectacular bear squeeze in silver becomes very likely.

Our next chart shows this week’s move in context, with gold threatening to break out of its three-year consolidation. 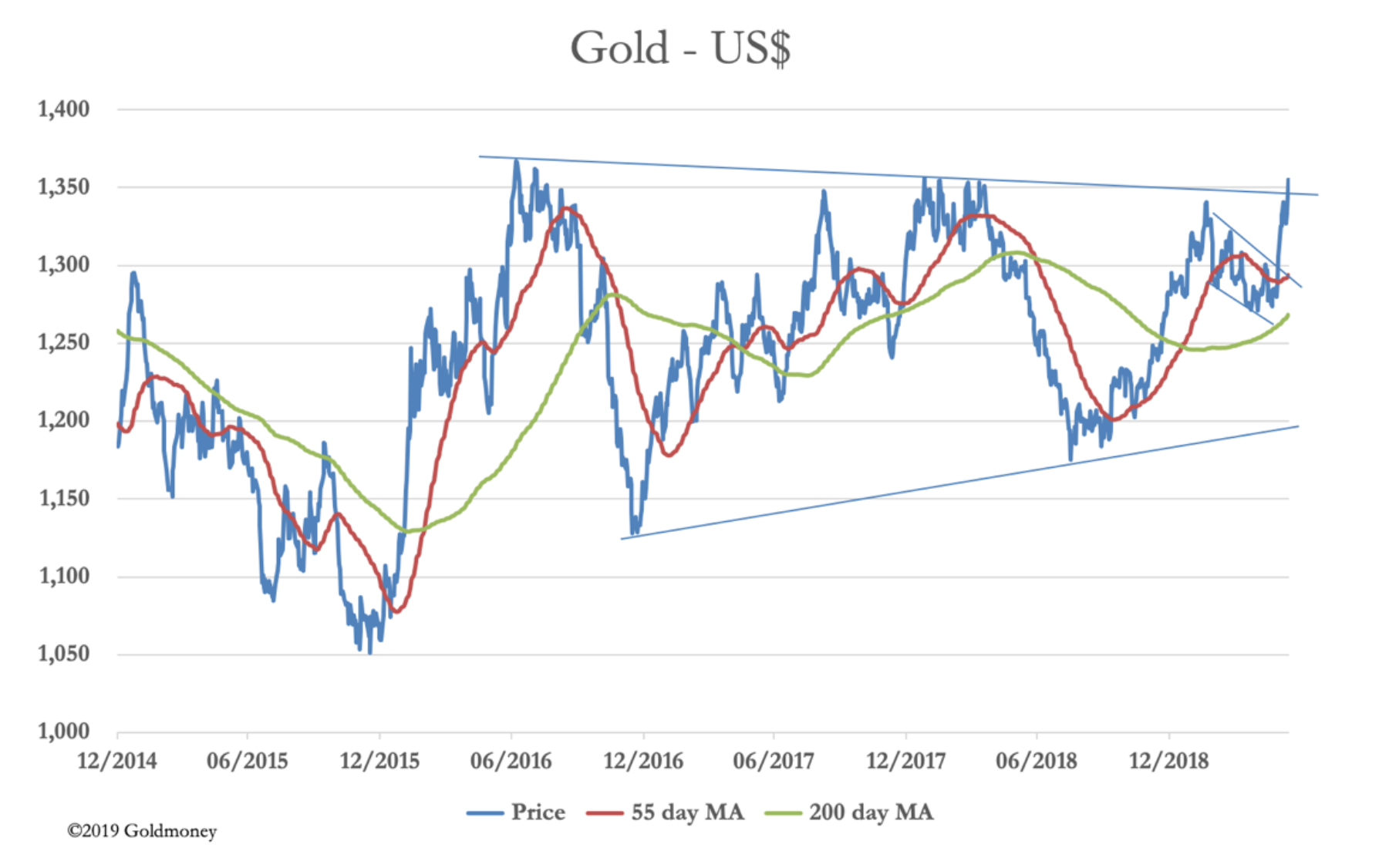 The price appears to have just breached the upper trend line of the consolidation, though the bulls will feel more comfortable when the price surmounts the $1360-70 level. That said, the moving averages are aligned bullishly. Importantly, the flag pattern from 20 February to 31 May (shown between the two down-sloping lines) has completed, and on the basis that move-in equals move-out, gives a price target of $1475. A convincing break above $1370 would then also point to $1650+ on the basis of the bullish run between December 2015 and July 2016 into the three-year consolidation.

Next week could well be crucial. For the moment, commentators are blaming an escalation of tension over the Straits of Hormuz. But we should note that threats of military conflict usually produce little more than a brief gut-reaction in gold and can equally provoke a strong dollar. What really matters is the economic prospects for the dollar and fiat currencies generally. The dollar’s trade-weighted is next. 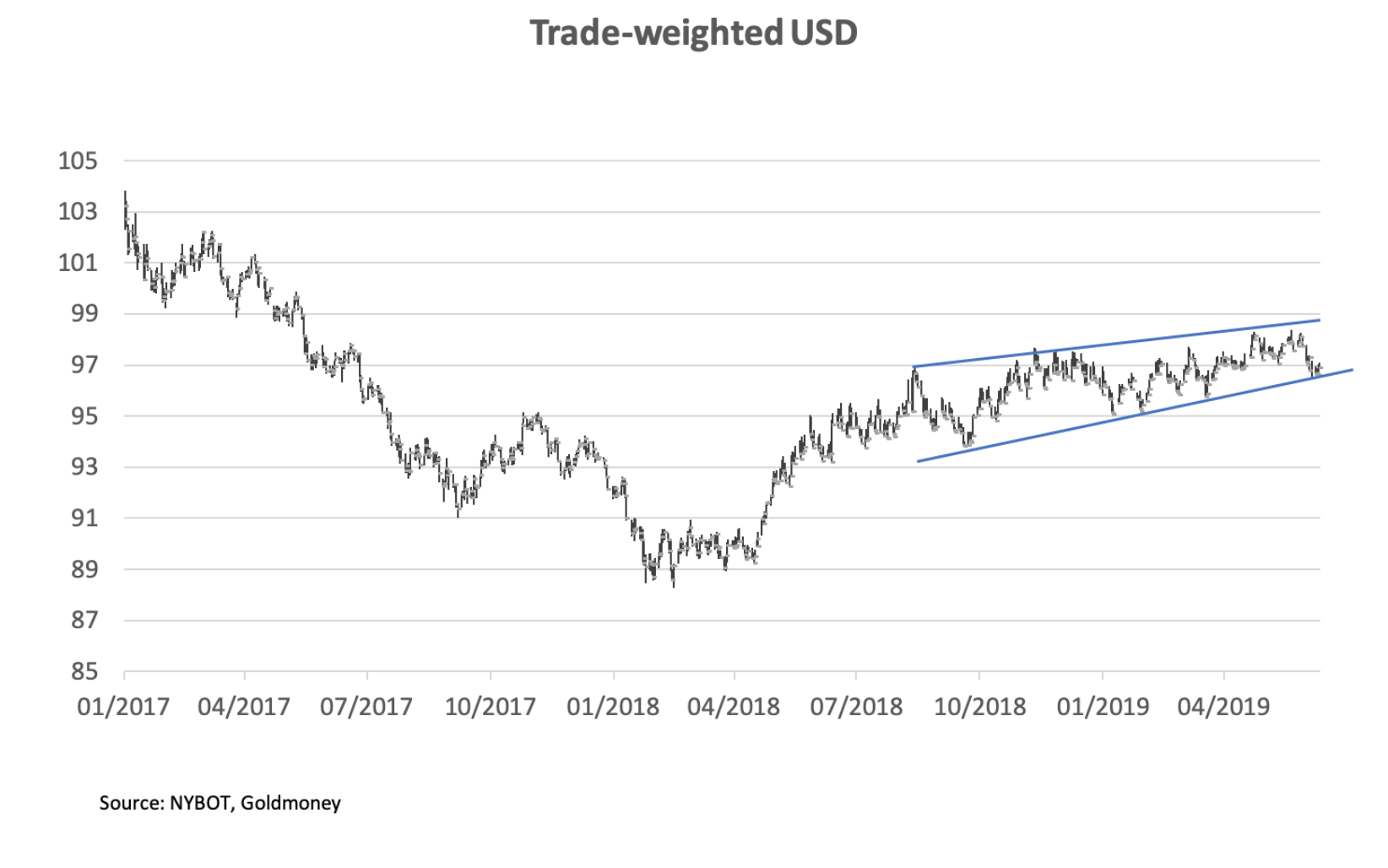 The dollar’s TWI is still in its consolidation pattern, and a convincing break below 96.5 would fit in with a gold price of over $1370.

Besides the developing situation in the Persian Gulf, yet more evidence accumulates of an impending global recession, with economic statistics everywhere pointing in that direction. It is becoming clear that monetary policy will ease sharply, particularly for the US dollar. Meanwhile, China appears to be abandoning hope that a reasonable accommodation on tariffs with America can be achieved, with America’s actions indicating their objective is to stop China gaining commercial power.

Yet another meeting between Presidents Xi and Putin took place on D-day. All that the Americans appear to be achieving is increasing solidarity between the Asian super-powers.

There is an adage the Americans should note, and that is when you are in a hole, stop digging. They find the end of empire impossible to accept. Since the end of Bretton Woods in 1971 they have persuaded and bullied other countries into accepting the dollar as the global monetary standard. That period of history is drawing to a close, and ultimately is what the gold/dollar exchange rate is all about.

Finally, a look at how the price of gold has performed in the other major currencies. 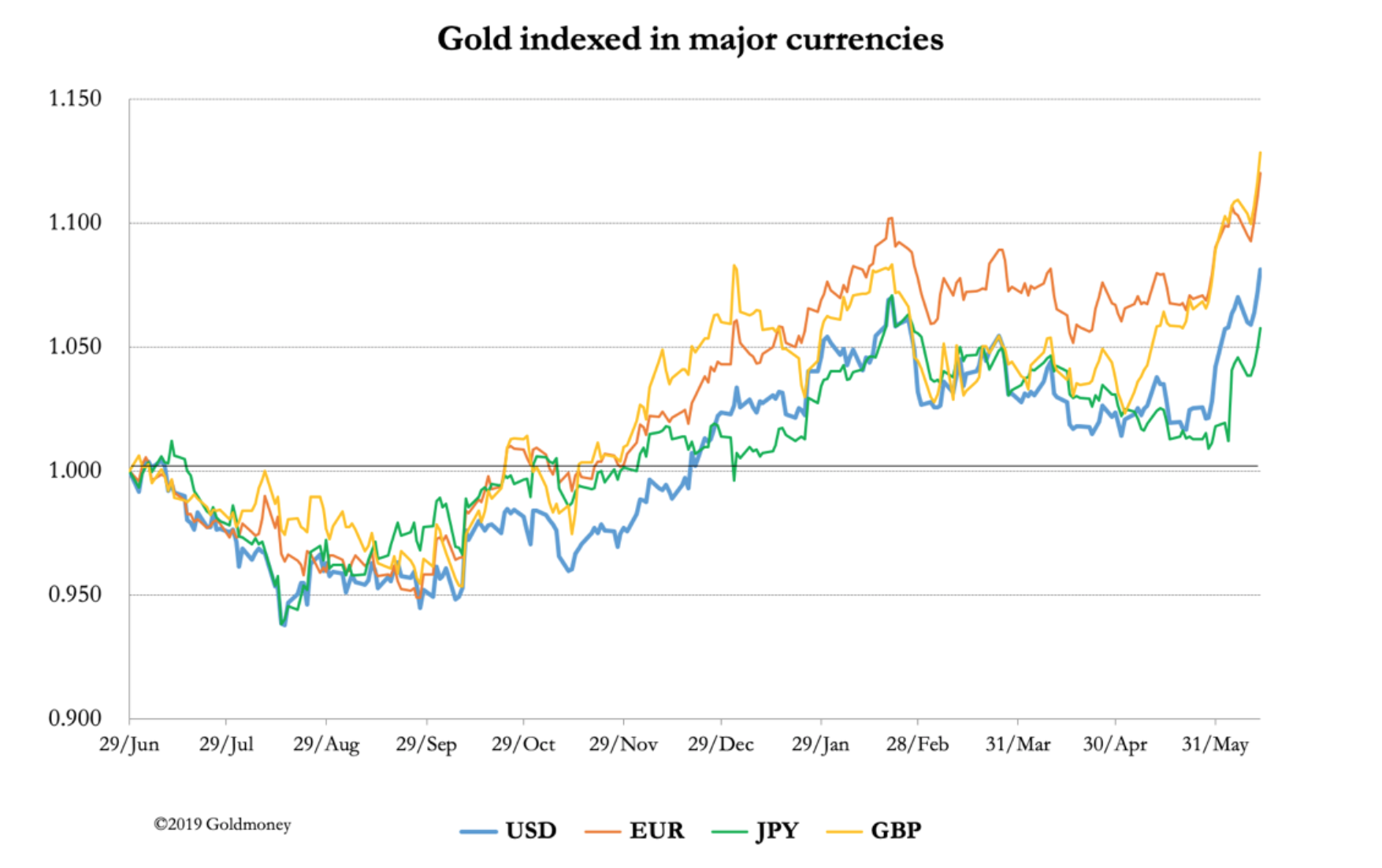