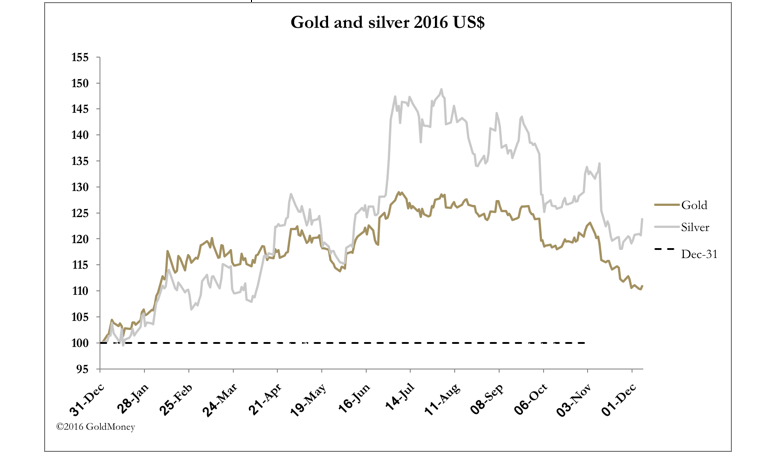 Gold and silver are showing signs of support this week, with silver notably recovering its poise, as the chart above shows.

Today gold is unchanged from last Friday’s close at $1170 and silver is up 34 cents at $17.10, in mid-morning European trade this morning.

However, bearish commentary is increasing, with increasing numbers of know-it-alls always ready to dream up stories as to why gold has fallen, and why it will collapse further. While no one knows future prices, when increasing numbers of ill-informed commentators profess to, it can usually be taken as a contrary indicator, rather like an oversold index. So the few who say they are bullish at current levels have a reasonable chance of being right, though it may take a little time to be proved.

More seriously, the bullion banks which are short have an interest in encouraging bearish talk, because they do not appear to have loaded up on long positions yet. The net position of swaps on Comex as proxy for them, shown in our next chart, confirms, with net swaps at -80,000 contracts.

Note how net swaps went positive at the beginning of the year before going sharply negative. This was accompanied by a new bull phase in gold, before a correction set in from early July. While net swaps may not go positive this time around, the chart clearly shows the work bullion banks have yet to do if they are to manage the gold price lower.

The actions of the bullion banks are why the paper market dominates trading. The physical bullion market is behaving differently. In India, there are reports of gold trading as high as $1700 equivalent, and in China premiums of $30 are common. The Chinese premium is being put down to reports that gold imports are being restricted. However, such a move by China’s authorities goes against gold policy, and while every administration makes mistakes in policy implementation, reports of Chinese restrictions on gold imports have yet to be substantiated and seem unlikely. One reason gold is subdued is the much-heralded rise in the Fed Funds Rate this month. Markets are betting on it with all the certainty (similar odds) that British electors would have voted to remain in the EU. The price-inflation outlook is, if commodity prices are an indication, for far higher rates next year, so a rise in the FFR is belated.

There are emerging signs of détente under the future Trump regime between the US and both Russia and China. President-elect Trump is moving rapidly to establish good trade and political relations with China, in contrast to the Obama regime. We hear on the grapevine that not only is an old friend of President Xi being appointed US Ambassador, but Henry Kissinger has been tasked with arranging a meeting between the two presidents next year. Equally, moves towards détente with Russia appear to be increasingly likely. As détente develops, it is likely that America’s anti-gold stance will appear out of step with the Asian power-bloc.