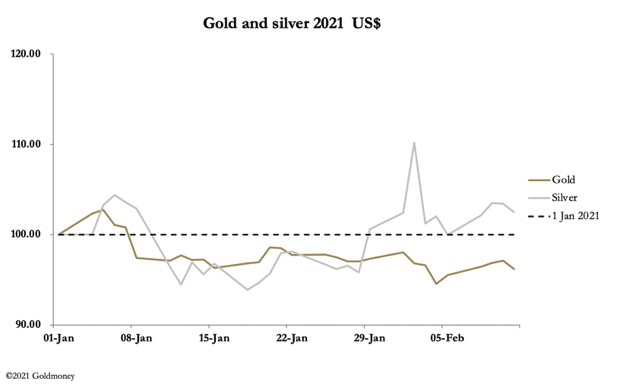 Gold and silver moved sideways this week, first rallying slightly before drifting lower from mid-week onwards. In the wake of the Robinhood/Reddit excitement of the previous week, silver imparted a better tone, while gold felt more vulnerable to attempts to weaken it. In European morning trade gold traded at $1821, up $9 on the week, and silver was up 27 cents at $27.17. At the time of writing this (0545 EST) a gentle rally in prices was developing.

The Commitment of Traders figures for the silver futures contract show that the Non-Reportable (small traders) category is almost twice that of the Other Reported on a net long basis, and it has increased its longs over the period of the Robinhood-inspired spike. This is shown in the table below.

In effect, the increase in the Non-Reported’s long contracts was matched by the Producers/Merchants category increasing their short hedges. Managed Money (hedge funds) cut their long positions. They were always likely to view the spike in the silver price reacting to small trader demand on 1 February as a selling opportunity, and by the close on 2 February — the date of the table above — they had unloaded 4,360 contracts. The perception in commentary at the time was rather different, suggesting that it was the bullion banks that killed the rally. Instead, the bullion banks used the opportunity to close 2,609 net shorts.

Our next chart shows the Managed Money position over time. 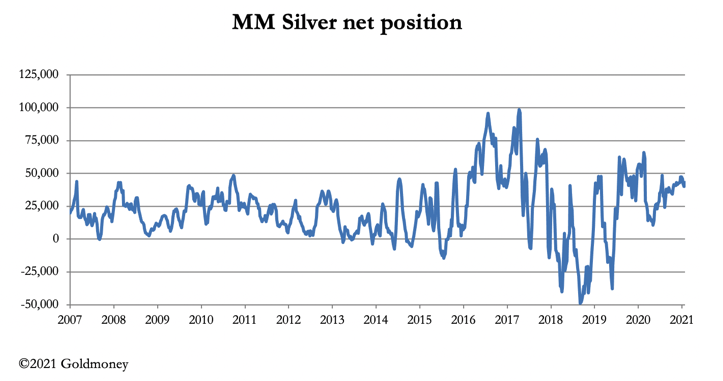 These hedge funds are neutral in their positioning, and certainly have room to add a further 30,000 contracts to their net longs, the equivalent of 150 million ounces – silver that does not exist. The danger for the Swaps is that with mine output restricted, the Producers/Merchants category is unlikely to add to their short hedges by much, while fabricators in this category could take the view that they should hedge their position by buying futures. In short, in an illiquid market with little or no physical silver in London and Switzerland, the balance on Comex is extremely delicate.

The active silver contract is March, whose last dealing day is in a fortnight. Furthermore, call option expiration will prove expensive for the takers — mainly bullion banks — and they will want to get silver down to under $26 so that up to 2,500 calls will be abandoned; so we could see attempts to drive the silver price lower over the next week or two.

In gold, the Swaps position is still intractably net short, as our next chart illustrates. 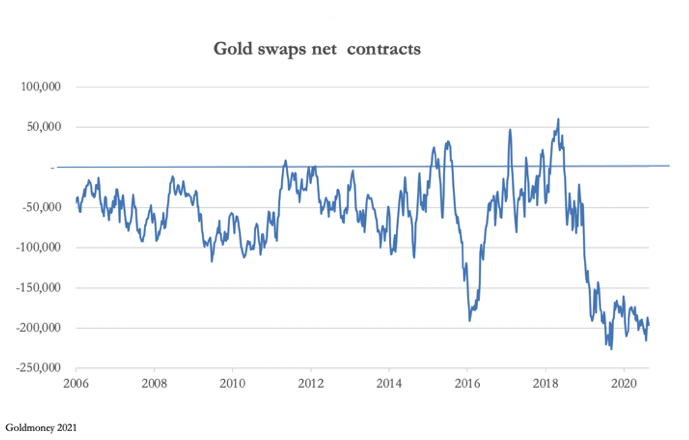 Compared with silver, this contract is much more liquid, yet still the Swaps cannot reduce their shorts. And embarrassingly, there is a continual drip-feed of longs standing for delivery. So far this year, 30,583 contracts have been delivered, representing over 95 tonnes, an annualised rate of about 760 tonnes. When there is little liquidity in other centres, Comex deliveries are absorbing the equivalent of China and Russia’s mine output combined. The liquidity squeeze from those standing for delivery is certainly serious and can only get worse as major currencies move towards hyperinflation.