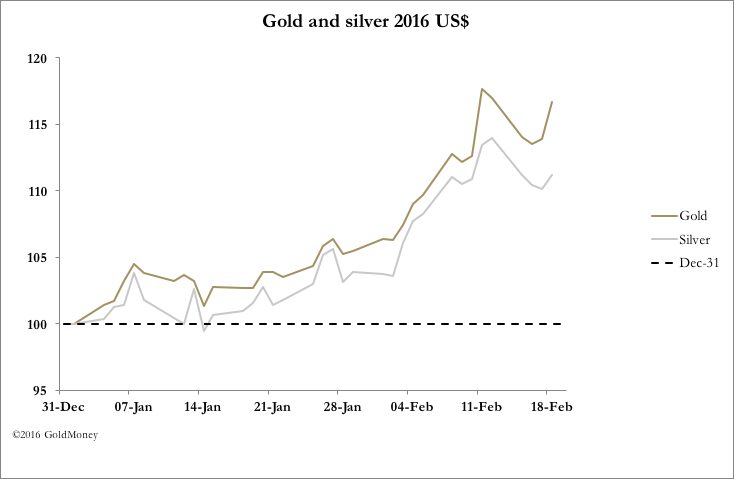 After a very sharp run-up in prices last week, gold and silver consolidated these gains, drifting slightly lower over the week.

Gold was almost unchanged from last Friday's close at $1236 last night (Thursday) but silver was down 35 cents at $15.40. This morning in early European trade gold was marked down, presumably on the basis there might be some bullish speculators looking to reduce their positions ahead of the weekend.

The dollar strengthened moderately against the euro, which for currency index purposes is its major counterpart. Equity markets rallied strongly in what appears to be a bear-squeeze. In other words, global markets have been on pause for the week, awaiting further developments in monetary policy.

It is worth putting gold's recent performance in a broader context. The next chart shows the gold price in US dollars, with the 13-week and 40-week moving averages. 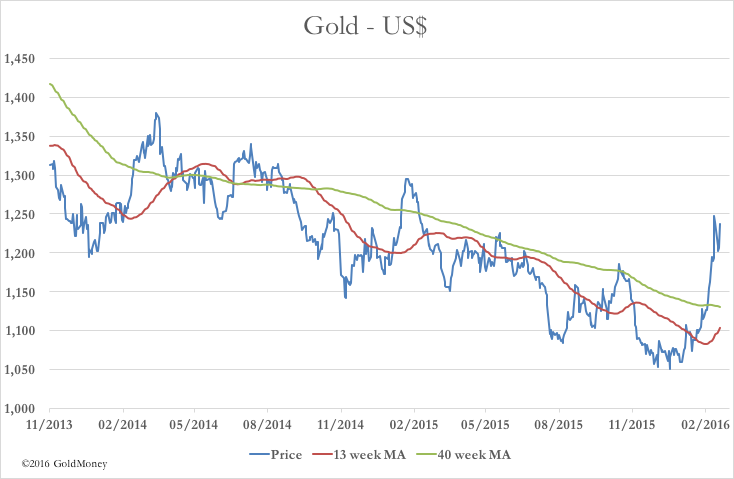 For the first time in over two years the gold price has risen substantially above the 40-week moving average. Not surprisingly, the 13-week MA is turning up strongly as well, which is relevant because it gives a moving snapshot of quarterly performance. While it would be dangerous to rule out attempts by vested interests to knock the price, gold's strength coincides with a market reassessment of the future course of dollar interest rates, and therefore of the dollar itself. A bullish "golden cross" formation, whereby the 13-week crosses above the 40-week, is set for early next month, assuming the gold price holds above the $1140 level.

The change in sentiment is also noticeable in the Comex futures markets, where the level of open interest has been increasing. This is shown in the next chart.

Note how open interest fell during January, while the gold price rose. During this period the shorts were closing their positions, which explains the divergence from the price. However, from the end of January, a rising price was accompanied by an increase in open interest of 57,000 contracts, reflecting bull positions being opened.

The evidence clearly points towards a new bull phase developing, however a word of caution might be appropriate. The bullion banks have made easy money jobbing on the short tack, and this is their current trading position. The other side of the trade is taken by speculating hedge funds, which can easily be stopped out. Therefore, if gold is to progress from here, continued solid buying will be required, potentially taking Comex open interest towards record territory at 475,000 contracts. However, with large firms such as Goldman Sachs talking the price down, there are still powerful bears out there with deep pockets.

Goldman is arguing gold will go lower on the basis the Fed will continue to raise interest rates over the course of this year. This opinion is gradually being abandoned by other firms, and even the Fed, in January's FOMC minutes released on Wednesday, appears to be gradually climbing down from its forward guidance on interest rates. It must be hard for the Fed to come to any other conclusion, particularly when there is such clear evidence of a slump in global trade.

The best thing going for gold is future dollar weakness, which is likely to continue as expectations of higher interest rates are abandoned. At least gold and silver bulls have the prospect of major firms such as Goldman yet to modify their economic expectations in line with the Fed, and eventually, reality.