Gold and silver were sold down in the futures market this week, after the first round of the French presidential election last Sunday. We are led to believe the hedge funds were bullish of precious metals because Marine Le Pen had a good chance of becoming president in the second round. 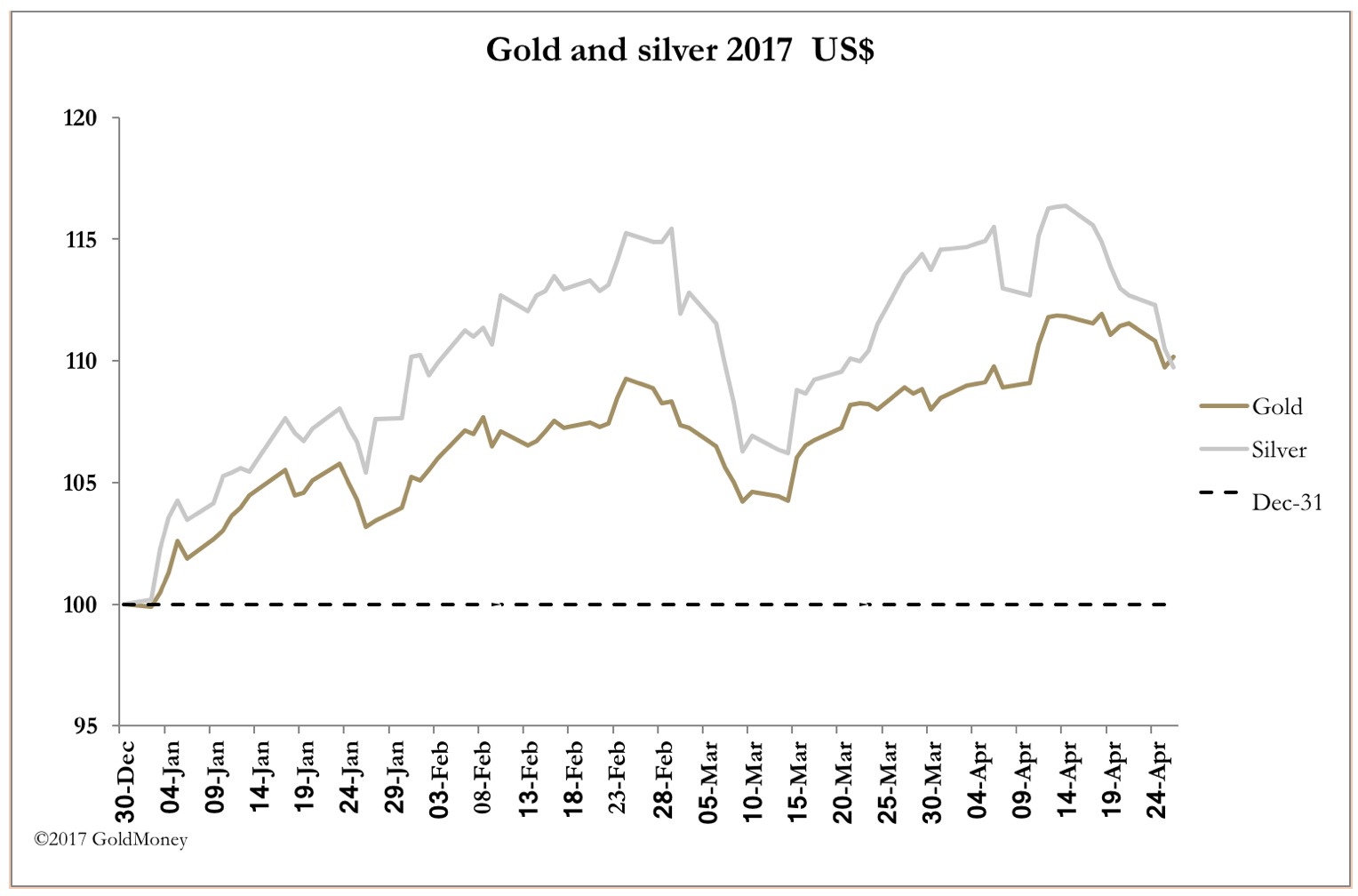 This was never, ever going to be the case, because the two-round procedure is almost always successful at weeding out non-establishment figures. Therefore, when all the losing candidates told their supporters to back the other Round Two contender, Emmanuel Macron, a smooth-talking ex-Rothschild’s banker, no one betting money on gold should have been surprised.

Perhaps hedge fund managers are all fools, or alternatively, the bullion banks took an opportunity to bash the market and close their shorts. Purely based on Comex history, the latter seems most likely.

But perhaps the hedgies are fools after all. They seem to fall for the same trick time and again. The result is this week they were on the wrong end of falls of $22 in gold, to $1266 in early European trade this morning, and 60 cents in silver, to $17.35. Silver has now underperformed gold, as our headline chart shows, when in a bull market it should be outperforming gold by nearly two to one. So, is this turning into a bear market for precious metals?

For the answer, we must turn to the dollar, because on Comex gold is a dollar trade, more than a gold trade. In other words, traders expecting a strong dollar will short gold. And perhaps silver is exposed to the same underlying reasoning, plus a perception that with the US economy slowing, industrial demand forecasts should be revised downwards.

These are just Comex arguments, which is based on the fall of the yen-dollar rate. This suggests capital flight from Japan in the face of escalating risk of war against North Korea. And indeed, the gut reaction behind hot money is bound to be to sell yen and buy dollars. But that’s just a hot money story. The real story is always in the physical market.

Interesting news emerged last week, that China’s richest man, Li Ka-shing is adding to his physical gold bullion and aggressively seeking gold reserves in the ground. Apparently, in the world of billionaires, Li is not alone. Li is likely to be very well informed, not only about Asian demand trends, but also about China’s geopolitics, and how they are likely to impact gold. Furthermore, there are signs of a revival of Chinese demand measured by Shanghai withdrawals, and we note that Russia is still adding to her gold reserves, with another 800,000 ounces bought in March.

There we have it. Hot money is saying an increase in war risk means you must buy the dollar, and the real money is saying buy gold. One can only conclude that physical buyers see this as an opportunity to grab as much bullion as they can, and it is that, at the end of the day, which drives the gold price, not a paper currency which might be deemed less risky that other paper currencies.