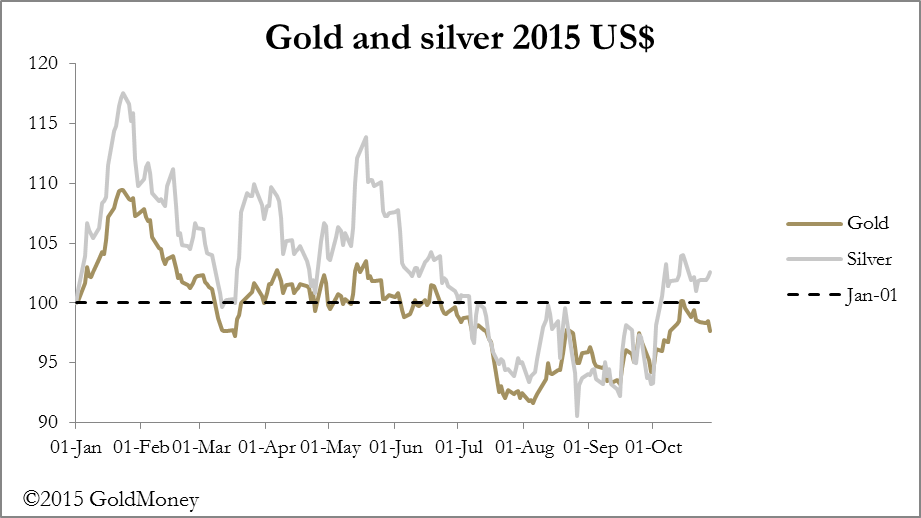 Prices in early European trade this morning were marginally firmer.

The kybosh was a reaction to the FOMC interest rate decision (no change) and the Fed's statement that went with it. The statement was the usual non-committal language, waffling around unemployment rates (which we know to be misleading) and inflation, which the committee expects to pick up as the economy recovers. What recovery?

The day after this statement, the Bureau of Economic Affairs announced that preliminary Q3 GDP grew at a disappointing annualised 1.49%. The fall in inventories was part of the problem, but 30% of the growth came from healthcare, boosted by government spending. Without the boost from healthcare the figure would have been truly dire. This goes counter to the Panglossian FOMC statement of the day before about their confidence in economic recovery.

It may be more accurate to suggest that the FOMC was emboldened by the recovery in stock markets since the end of September, with the S&P 500 rising 10%. Furthermore, European bond yields have fallen and Mario Draghi at the ECB is dropping heavy hints over more money-printing. Presumably, the FOMC's view is that reflation is occurring in other major markets, which should help the global economy recover without further easing by the Fed.

It all added up to an opportunity for bullion banks and swap dealers short of gold and silver to mark prices down heavily. The buying on Wednesday morning was in a time-zone that suggested Middle-Eastern interest, so it would have been midnight in the Gulf when the FOMC statement was released.

It behoves us to look at the underlying technical position in the futures market. The commercials which manage prices are the US bullion banks and the swaps. The next chart illustrates how short the swap dealers had become in supplying Comex contracts to speculative buyers.

On 4th August the swap dealers on Comex (mostly non-US bullion banks and professional dealers) were net long 24,583 contracts, a record since 2006. Since then the gold price has rallied, and the swaps supplied contracts, mostly to hedge funds in the Managed Money category, which were net short to a record degree. Their net position is shown next. 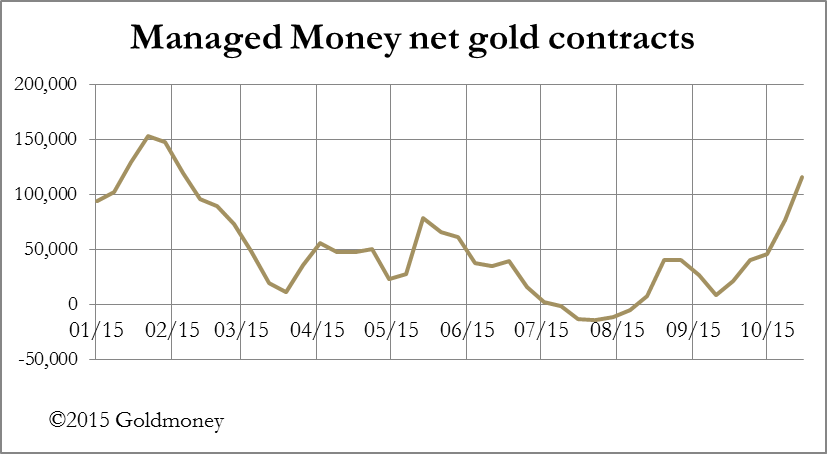 The hedge funds were first squeezed on their bear positions, and then went long, leaving the swaps short by over 60,000 contracts. This is about average on an historical basis, but it is clear that the swaps (as well as the American bullion banks) have an incentive to mark prices down to trigger stops on hedge fund long positions.
That is what happened between Wednesday, following the FOMC statement, through to last night. Gold was marked down from $1182 to $1147, worth nearly $200 million to the swap dealers. They will expect to continue to mark prices down against the hedge funds until they detect the hedge funds going short, or demand for physical drives prices into backwardation.
This illustrates is why it is so dangerous to speculate in these markets. It also illustrates how the gold market is managed solely for profit by banks, instead of reflecting genuine supply and demand.