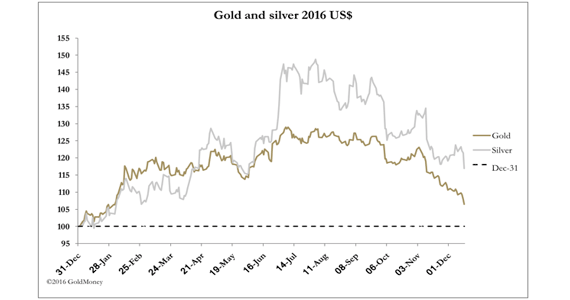 This week the Fed announced the widely expected rise in the Fed Funds Rate to a target of 0.5 – 0.75%, with the expectation that there will be three more rises over the course of 2017.

Gold is now up only 6.3% on the year in dollars, having been as much as up 29% mid-year. Silver is up 16% having been up 49% on 2nd August. Gold’s weakness is the counterpart of dollar strength, but with industrial metals rising strongly (copper is up 22% since 1st October, while gold is down 14%) valuations are getting stretched. The strength in base metals has helped silver relative to gold, reflected in the chart of the gold/silver ratio. 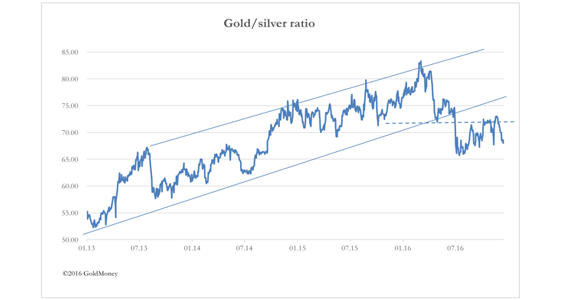 The fact that gold is falling relative to base metals and silver tells us that gold is getting oversold, discounting the idea that projected rises in the Fed Funds Rate will somehow kill price inflation. If that was true, base metals and other raw material prices would not be rising strongly.

To give an idea of why the chattering classes are so bearish, the next chart shows gold with its moving averages. 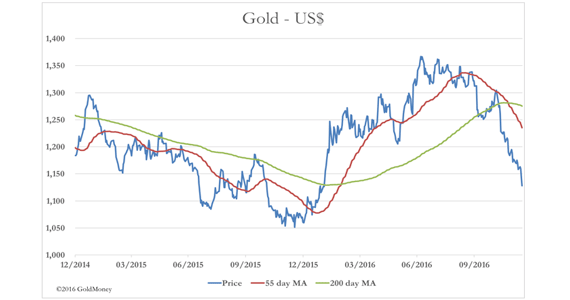 This chart tells technical analysts that gold is clearly in an established bear market. Nearly all the commentary on gold devolves down to charts, because few people understand what gold is about. Technical analysts will concede that gold is oversold and could have a consolidation rally, but after that they would expect it to fall further. Equally, gold was in a bear market until January 2016, when it exploded upwards. All this form of technical analysis tells us is a trend is a trend until it isn’t, but the reality is no one knows tomorrow’s prices.

As I’ve stated in previous reports, what matters is the trading position of speculative money (hedge funds) relative to the bullion banks (listed as swaps) on Comex. When the bullion banks have closed their shorts, and perhaps gone modestly long, then the price will rise. Wash, rinse, repeat. It has little to do with a quarter point here or there on the Fed Funds Rate. There is still a little way to go on this analysis.

At this price level, demand for physical metal is very strong, with significant premiums reported in India and China. Admittedly these premiums are due to government restrictions on imports in India’s case, and a story (unsubstantiated) that the Chinese government is also restricting gold imports. But this is about what we are told and not told. Officially recorded movements of bullion are one thing, unrecorded another. Premiums do not exist without stimulating unrecorded movements of physical gold.

We can’t say for sure that gold will bottom here, but physical demand reflected in Asian premiums suggests we must be close. Deliveries from the Shanghai Gold Exchange in November rose to 214.72 tonnes, from 153.25 tonnes in October. Doubtless, lower dollar prices for gold will have kept this pace of Chinese demand up, officially recorded or not.

Finally, we should note that traders’ bonuses at the bullion banks are a powerful incentive to keep gold and silver prices as low as possible at the year end.