..."Relations between N Korea and China have deteriorated in recent years, and the only leader the Korean dictator will listen to is Putin. But America has burned bridges over Syria, so there seems no alternative to the Korean situation escalating out of control." 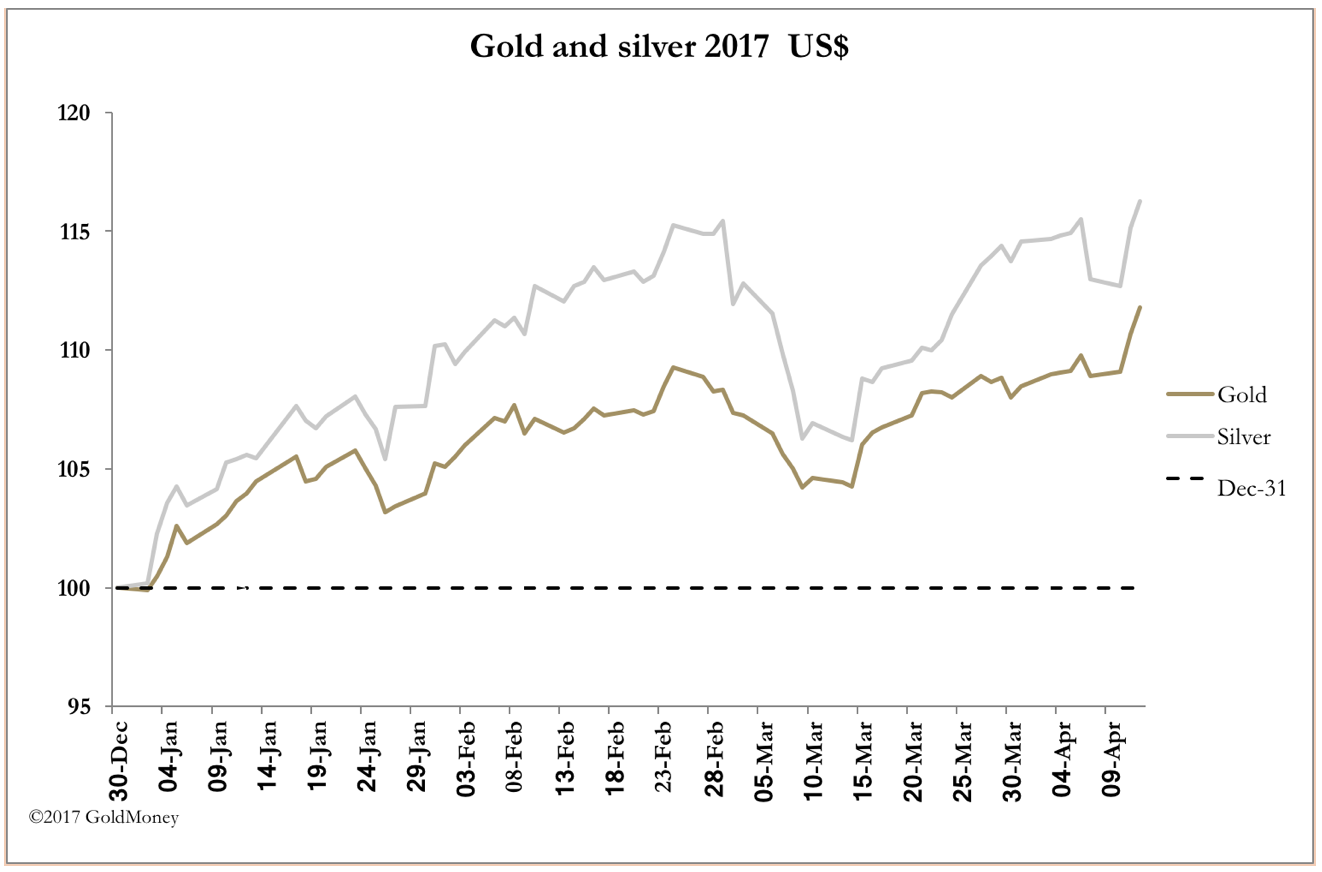 Last week’s market report concluded that with the Syrian situation deteriorating the outlook for the price of gold had rarely been better. Gold and silver have certainly risen, as our introductory chart indicates. Gold in European morning trade was up $34 from last Friday’s close at $1287, and silver up from $18.00 at $18.57. This is a short week given tomorrow’s Good Friday holiday, and with geopolitics taking centre-stage, traders are likely on balance to close short positions today, retaining their longs. More on geopolitics below.

Short-term the gold price can now be expected to challenge the $1300 level. Technical analysts, which are nearly all speculators trading in Comex futures, have been confounded by developments. The background has been a fundamental bullishness over the dollar, which is now eroding. The flip side has been negative for gold, so chartists have continually warned of profit-taking, first at the 55-day moving average, then at the 200-day MA. This is shown in the next chart. 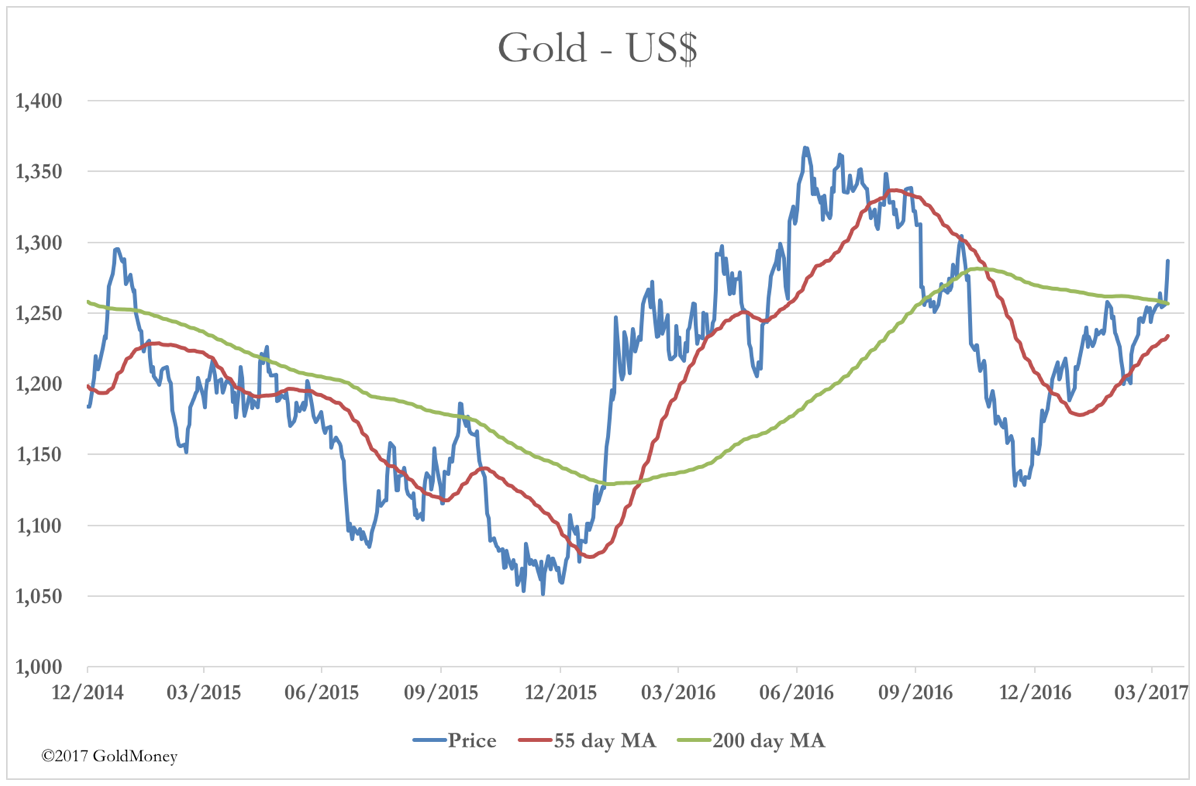 Technical analysis could hardly have been more misleading.

Silver is very overbought, and besides some hiccups, still powers ahead, with open interest on Comex close to record levels. But the story is all gold this week, because of President Trump’s U-turn from peacenik to warlord. Last week it was Syria, and that is on-going, with the Russians refusing to back down. But coming up fast on the rails is North Korea, which is potentially far more dangerous.

America has dispatched an aircraft carrier into the north-eastern Pacific, a modern version of gun-boat diplomacy. Trump has tried to get China on side, and China is reported to be sending troops to the North Korean border. This is probably to contain any fall out from US aggression, rather than as part of a joint operation. Relations between N Korea and China have deteriorated in recent years, and the only leader the Korean dictator will listen to is Putin. But America has burned bridges over Syria, so there seems no alternative to the Korean situation escalating out of control.

We have a well-armed paranoid dictator versus a rookie president, who has suddenly adopted a kick-ass mentality. This is warming up to be the most dangerous time since the Second World War. It is reported that Kim Jong-Un has ordered a nuclear test this Saturday, in which case he will be ratcheting up the tension as well.

With no jaw-jaw, war seems increasingly inevitable. America’s aircraft carrier will be a sitting duck, and tempting as a target. Anecdotal evidence is of American hotels in Seoul hosting senior American military officers, indicating that plans to teach Kim Jung-Un a lesson are already advanced.

In summary, no one is talking to find a solution, Kim Jung-Un is wholly paranoid and ruthless with it, and North Korea is militarily equipped enough to create enormous regional disruption, not only to America forces but also to South Korea, and the old enemy, Japan. Yet Trump appears to think the might of America will force Kim Jung-Un to see sense and back down.

Let us hope this analysis is too alarmist, but until proved otherwise, it is likely to become the working assumption with respect to the dollar and gold.

The last chart shows gold’s performance so far this year in all the major currencies. 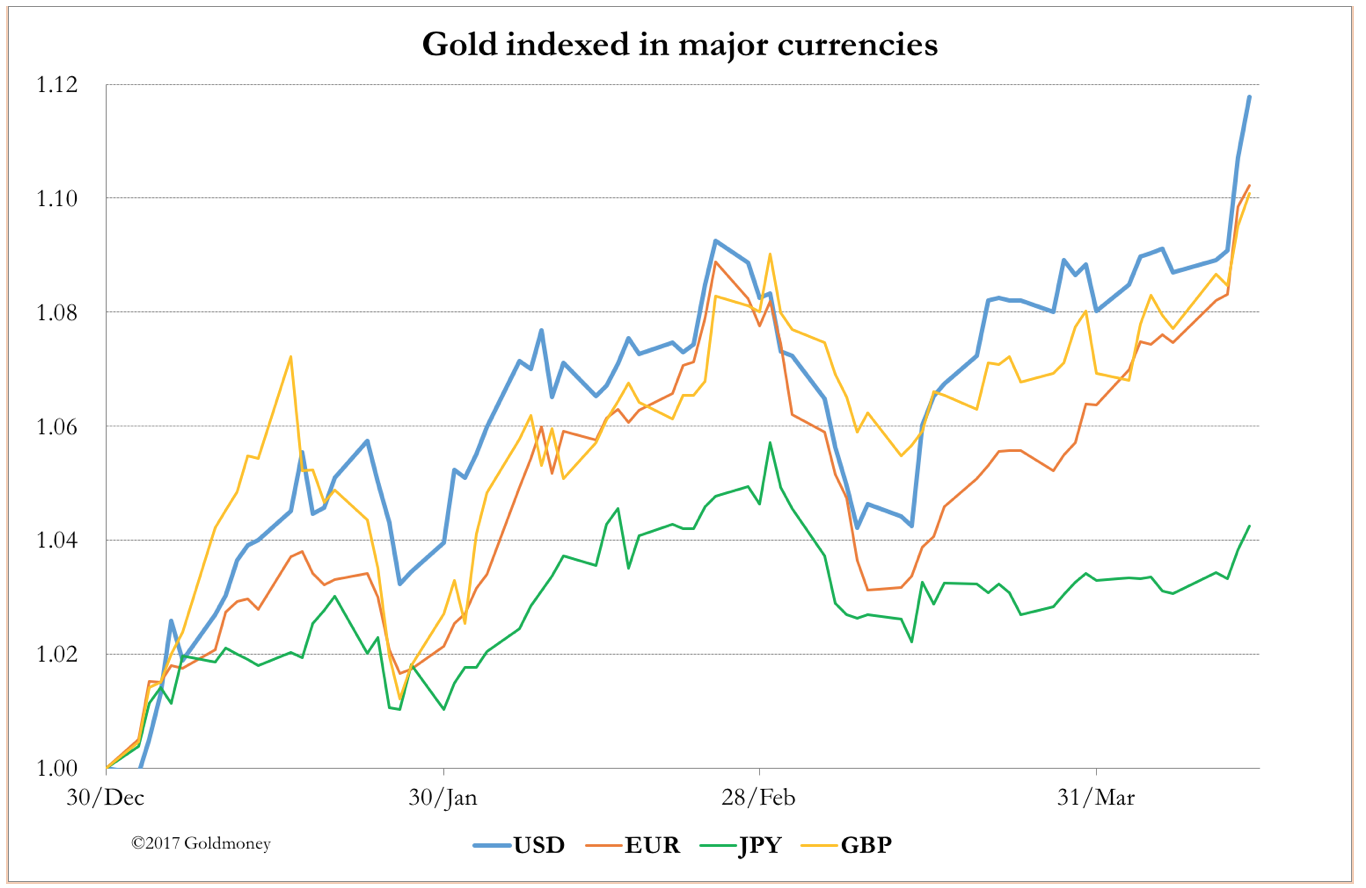 It’s worth noting that priced in yen gold has risen just over 4% this year. The strong yen is the reason, and has deterred Japanese investors from buying gold. That could now change.

Happy Easter to one and all.