Market Report: Equities down, gold on a tear 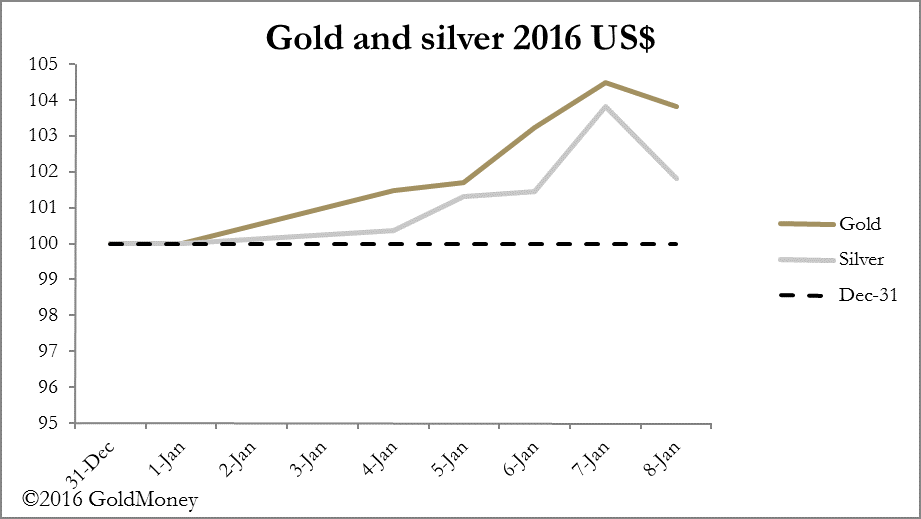 The year started with a bang.

Gold rose 4.5% and silver 3.8% in the first four days' trading, while equity markets had a torrid time. The dollar was also strong against the other major currencies, and many investment gurus are now worried, ranging from Marc Faber to George Soros. Overnight, on Thursday/Friday, state intervention was reported to have steadied Chinese equity markets, and gold and silver prices fell back slightly on real or imagined profit-taking.

One could argue that markets are only normalising. After all, equities have been buoyed up by zero interest rates and the usual bullish tones from analysts who are always positive for the new year. Gold in particular become oversold to a record degree in the last days of 2015, as shown in the chart below, which shows the net position in the Money Manager category (mainly hedge funds) on Comex. 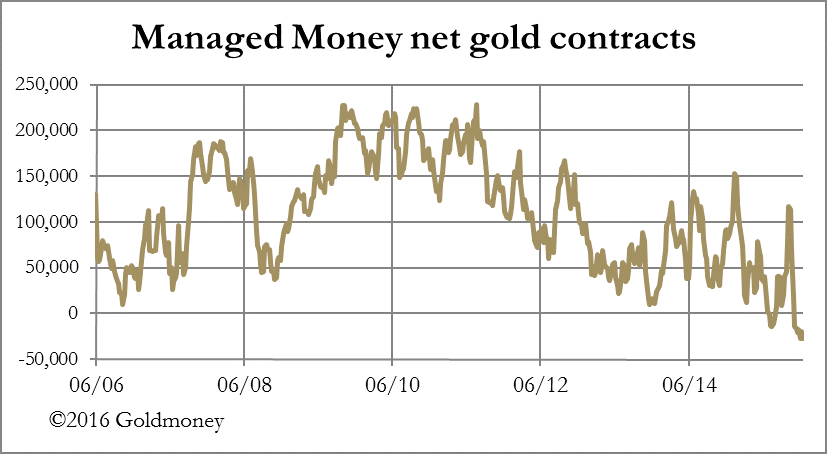 Hedge fund managers have never been this net short, to the tune of 27,021 contracts. Gross shorts, not offset by long positions, are over 103,000 contracts, giving scope for the granddaddy of all bear squeezes. In that sense, the increase in the gold price of $50 over the week is minor, holding out the prospect of more rises to come.

Silver has been less dramatic in its moves, presumably because the short position has appeared less pronounced. However, in a market that lacks physical stock, the price finally began to rise last night, up 2.6%, indicating a short squeeze may be developing. But compared with volatility elsewhere, these moves are small beer. Oil has been particularly volatile, with WTI falling over 16% from Monday's opening to early yesterday morning (Thursday) when it bottomed at $32.12. High-grade copper suffered a similar fate, falling 15% over the same time-frame.

As mentioned above, some respected and experienced investors have turned bearish over the prospects for global stock markets, and these negative signs are easy to see for anyone following financial markets. Investors are increasingly risk-averse, with bond yield spreads for low-quality corporate debt having widened. Substantial loan losses are commonly expected from energy and commodity related debt, and every indication that international trade is collapsing is evidenced by the Baltic Dry Index hitting record lows.

Meanwhile, China's citizens, in spite of financial turmoil, continue to accumulate gold. With just a few days to report, they have taken delivery of 2,555 tonnes in 2015 (v. 2,102 in 2014), roughly 80% of global mine production. The total addition to China's reserves in 2015, including an increase in June of 604 tonnes, totalled 708.2 tonnes. Russia added about 181 tonnes to official reserves. And according to the World Gold Council, in the first three quarters Indian demand was 752.7 tonnes, or 1,004 tonnes annualised. These sources of demand alone total 4,448 tonnes, nearly 40% more than estimated global mine supply.

These are not the only countries adding to physical gold, so it is hardly surprising that we enter 2016 with greater stock shortages in western vaults. Furthermore, the outlook should continue to be dominated by increased perceptions of investment risk generally, which suggests that precious metals should be a profitable safe haven in the coming weeks.