Dealing Desk: Silver overshadowed as gold comes back into favour

Gold demand might be at a five year low, according to the latest World Gold Council demands trend report, but this week the yellow metal returned to favour with GoldMoney's customers.

Dealing Manager Kelly-Ann Kearsey said, 'Gold was the favourite among our customers with silver having lost its appeal. The slight fall in the gold price this week might have prompted some opportune buying, while its more volatile sister, silver, fell out of favour a little seeing slightly more sellers than buyers. We have had some fairly large orders of gold this week, although overall volumes are slightly down, suggesting some are seeing this as the right time to diversify their portfolios for the longer term.'

The chart below shows the gradual shift in behavior among customers in the last three weeks, as gold takes over from silver as the metal being bought. 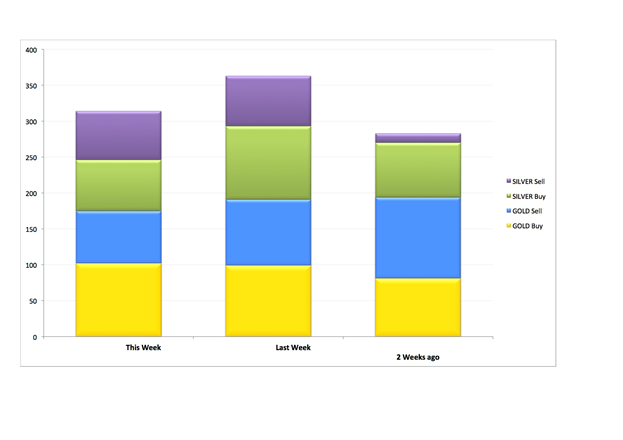 Kelly-Ann reports that Singapore is once again the favourite destination for new metal purchases, continuing the west to east flow, 'The strength of the US Dollar and the news that the European Central Bank (ECB) won't start its quantative easing until March, have weighed on gold sentiment in the general market. The recovery in the oil price might also have hit general prices, but that hasn't been a major consideration for GoldMoney customers.'

The positive news of a Ukraine ceasefire will lessen the geopolitical factors for gold, and next week sees a lot of economic data – particularly for the USA – which is likely to be reflected in the market. 'Monday will be Europe's day with the ECB meeting and further indications with regard to the Greek situation and will they or won't they exit? Wednesday though is likely to be the biggest day in terms of a swathe of US economic data and the Federal Open market Committee Meeting minutes being released. It could mean a fairly quiet market up until mid week, unless there is some startling news out of Europe.

'Overall though as the World Gold Council report shows, investment demand is on the up and while the general market might sometimes lose interest in the yellow metal, our customer data shows there are still many, including the Central Banks themselves, who are buying to spread their risk and hedge against inflation.'

GoldMoney is one of the world's leading providers of physical gold, silver, platinum and palladium for private and corporate customers, allowing users to buy precious metals online. The easy to use website makes investing in gold and other precious metals accessible 24/7.