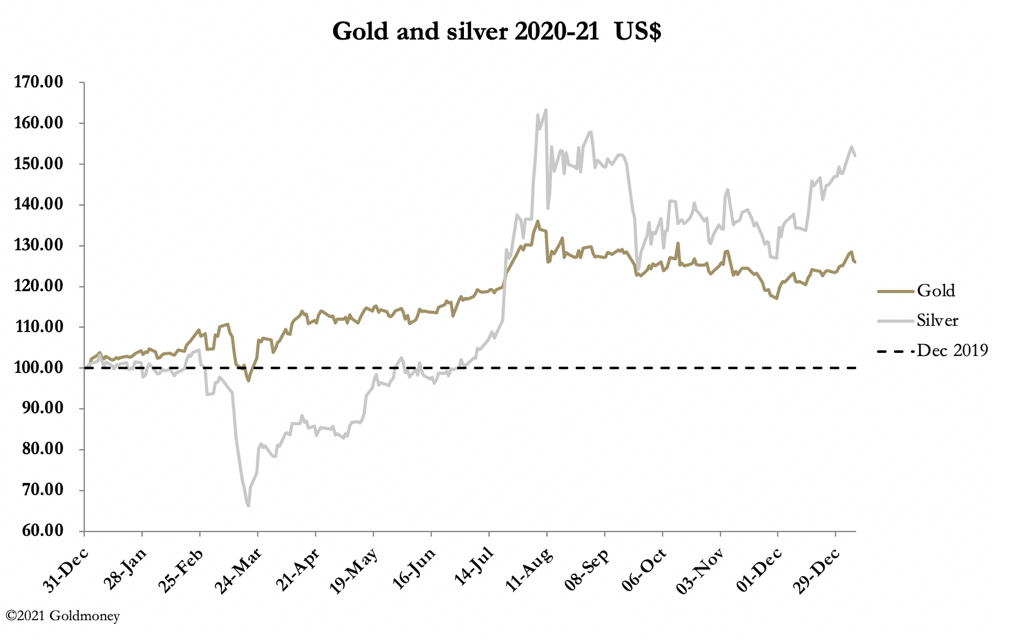 The new year for gold and silver got off to a good start, before both metals got slammed midweek. From close of trading on Thursday 31 December (Friday being New Year’s Day when markets were closed) gold was down a net $7 at $1891 in European trade this morning, but silver was slightly firmer, up 20 cents at $26.55.

Since end-November, both metals have enjoyed a decent rally, but the underlying condition is one of the paper-bullion establishment being desperately short on Comex. There is very little free physical liquidity in London, despite the LBMA reporting further increases in vaulted gold, totalling 9,450 tonnes. But digging into the figures, of the 102 tonnes increase, only 59 tonnes was in LBMA vaults and the rest in the Bank of England. There was also net selling of gold ETFs in November, predominantly from North America and European investors — but not enough to make a material difference.

For the bullion banks unhedged in London, it is a case of keeping calm and carrying on, in order to gradually close down their shorts. Our next chart shows their exposure in dollar terms. 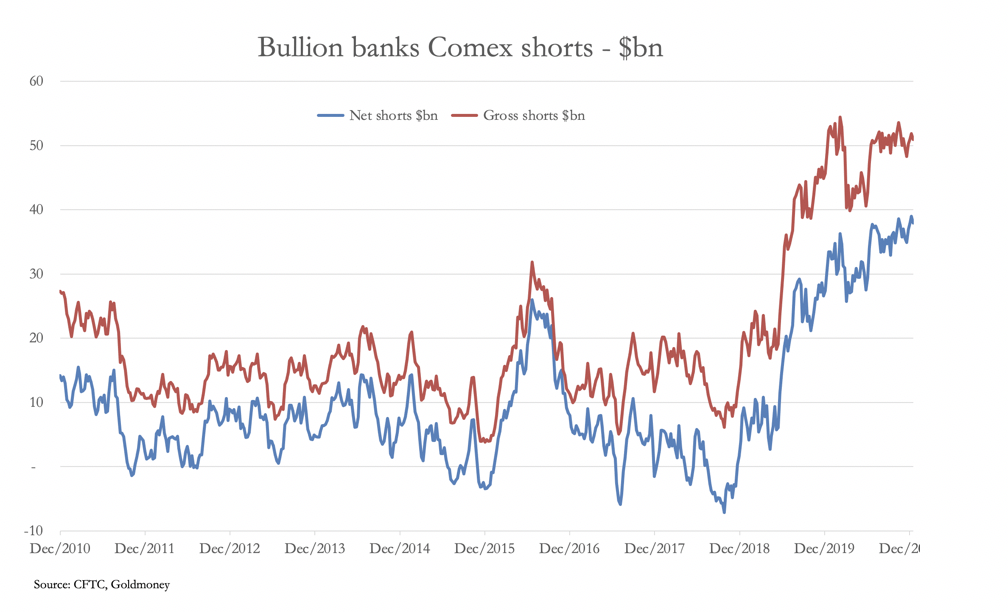 At $51bn gross and $38bn net of longs the bullion banks’ total position is still close to all-time records, and they simply cannot afford to see gold prices run away on the upside.

The table below shows how Comex positions have altered, according to the most recent commitment of traders’ report.

Both Swaps and Producers/Merchants categories have reduced their net shorts by roughly 2% between them, closing long positions mostly in the Other Reported category, which has also been standing for delivery, totalling 749 contracts between 21—29 December.

Now that Biden is definitely the next US President, in the very short term the bullion banks have a possible narrative in their favour. The Keynesian argument that is already emerging is that monetary stimulus under Biden can now get the US economy moving, leading to a stronger dollar, and therefore a weaker gold price. Interest rates will rise, they say, as normality returns. Presumably it is thinking on these lines has led to a small recovery in the dollar’s trade-weighted index, with some technicians claiming the dollar is oversold, and due for a bounce. Furthermore, the yield on the ten-year US Treasury is now above 1% and looks like rising further.

We shall have to wait and see whether this argument has legs. But it is built on the sands of hope, and ignores the accelerating dollar debasement, let alone a likely higher deficit-spending Biden administration.

Another anti-gold argument is resurfacing, and that is that bitcoin is the new gold. In the last month, bitcoin has more than doubled from $18,000, while gold has risen about 2%. But these are two very different markets. Bitcoin is being fuelled by institutional money which is frightened of being left out. Furthermore, the market-making establishment is not net short of bitcoin the way it is in paper gold: if anything, it is joining in the rush to go long. It is a mistake to suggest, other than at a minor retail level, that gold is being abandoned for bitcoin.