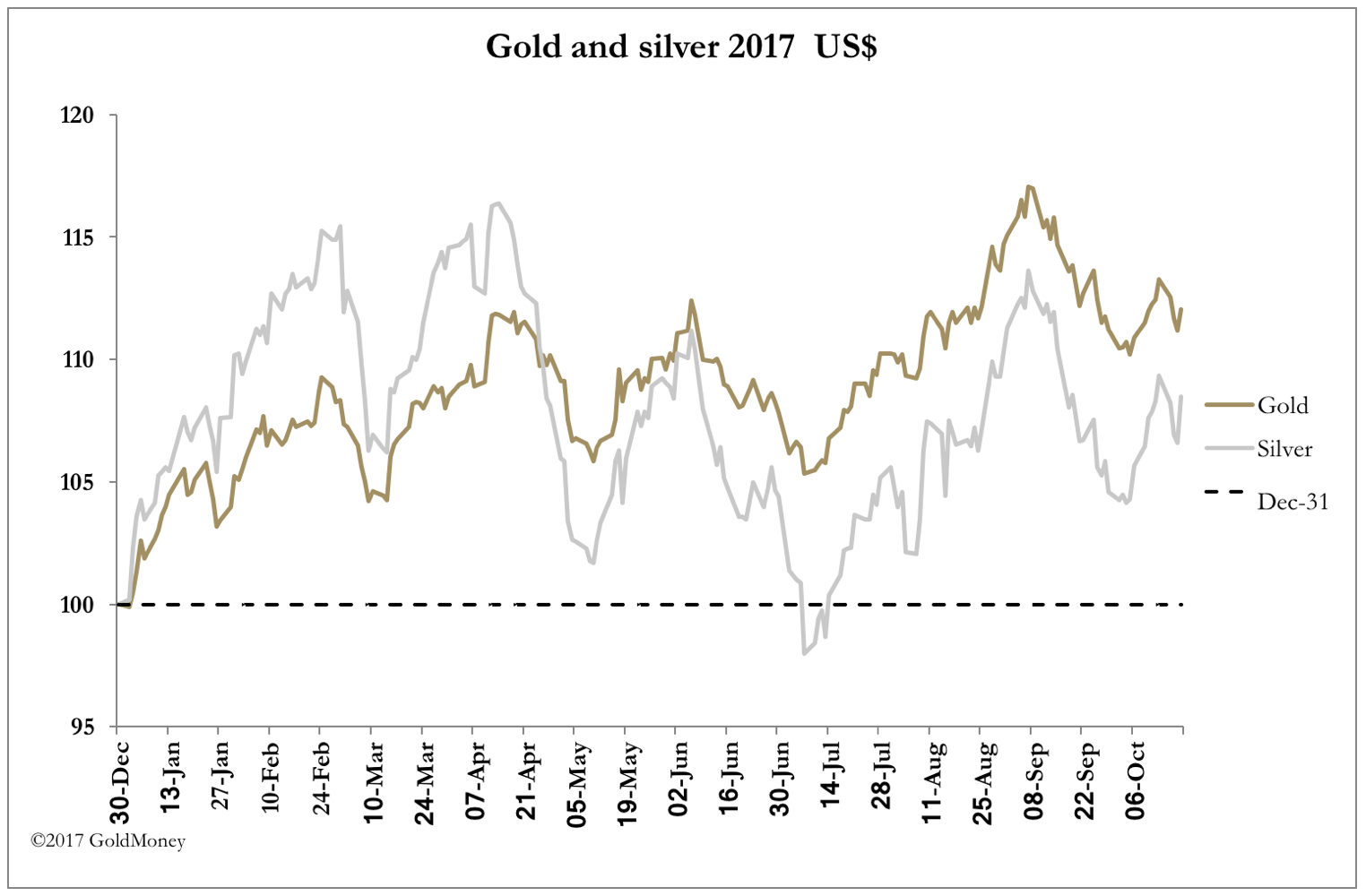 After the previous two-week rally, it was perhaps natural for precious metals to consolidate this week. Gold, which closed on a high note last Friday, lost $23 to $1281 by early European trade this morning (Friday), and silver 34 cents to $17.08. Trade on Comex was subdued, and the reason behind the pause appears to be a continuing rally in the dollar.

The dollar’s rally extending was always likely, given its decline since the start of the year. Essentially, it is a pause which reflects traders locking in profits. And when that process is over, the dollar’s downtrend is likely to resume.

There are two reasons for the dollar’s continuing weakness. Offshore demand for the dollar is set to deteriorate, as China continues to chip away at its status as the dominant settlement currency. Latest moves, which will culminate in the forthcoming introduction of a yuan for oil futures contract on the Shanghai Futures Exchange, strike at the heart of the dollar’s status. Indications are this contract will start trading next month, so that by the beginning of 2018 it should be reasonably established.

In time, this should mean that bank credit loaned offshore from America will contract, reflecting sales of surplus dollars. To the extent these sales are not neutralised through currency intervention by the authorities or the banks reducing their balance sheets, these surplus dollars will end up onshore, inflating domestic credit. The transfer from offshore to onshore is bound to undermine the dollar’s value.

The second reason for the dollar’s decline is China is likely to ramp up demand for industrial commodities, now this week’s Congress is out of the way. Domestically, America will face commodity-driven price inflation, as will everyone else. But having cut herself off from the Asian growth story, the US economy is set to be relatively weak. The Fed will be torn between retaining monetary stimulus and the need to contain price inflation. Real rates seem certain to become increasingly negative under these conditions, fuelling further dollar weakness.

The gold price is the other side of this coin. For the moment, the talk is of dollar interest rates rising, perhaps by another quarter point or so, followed by a further quarter point in due course. But how far can this process go, before the dollar debt mountain begins to slide into insolvency?

Markets are focused on the short term, not discounting the mounting dangers the dollar faces. That is bound to change, and the time scale may be tied to China’s plans to expand the number of yuan denominated futures contracts. There has been some talk that Iran, Russia and perhaps Venezuela will sell some of their yuan for gold, matching oil to gold through futures in Shanghai and Hong Kong. That would drive the gold price up, but the desire to buy gold with excess yuan is yet to be established.

The driver is likely to be the dollar, as oil exporters see the dollar’s inevitable decline, for the reasons stated above. They will see gold as a dollar hedge, rather than a currency substitute to hold. However, short-term, we need to evolve from worrying about the next rise in the Fed Funds rate towards a greater appreciation of the substantial threats faced by the dollar.