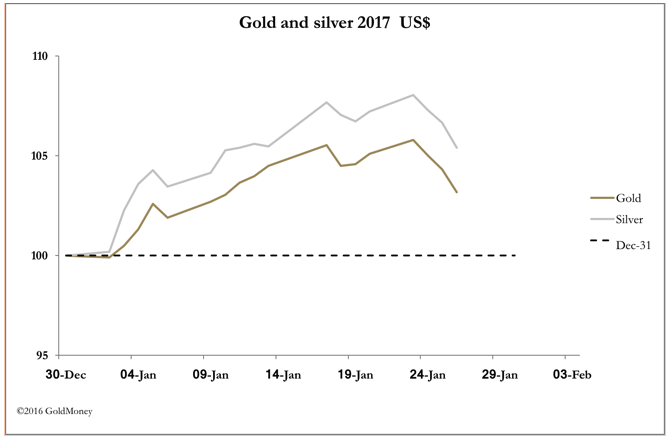 It has been a week of consolidation for precious metals, with gold and silver hitting their highs on Monday.

The timing of the slight pull back is, surprise, surprise, just before futures option expiration, when the takers who have sold options doubtless wish to see calls with strikers at $1200 and less expire worthless. They have their wish, and on the week gold this morning in early European trade stood at $1182.50, down $28, and silver at $16.70, down 38 cents.

It’s time to assess where the vested interests stand. The next chart is of the managed money’s net long gold contracts on Comex. 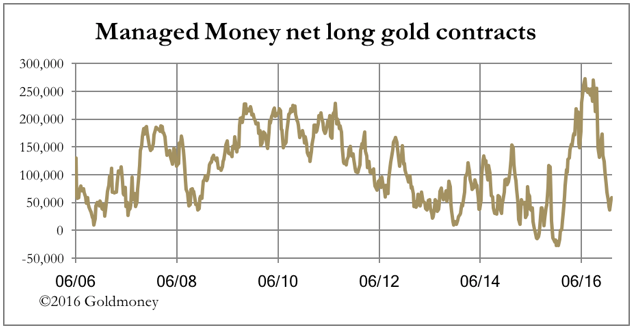 The long-term average is net long 112,500 contracts. At the last data point, it stood at 58,635, roughly half the long-term average. On this measure, the market is oversold, and all other things being equal, suggests that prices should rise. This data point will be updated tonight from 17 January to 24 January, but with open interest down roughly 20,000 contracts last night (Thursday), it is likely to be slightly more oversold on balance.

The next contract looks at the net swaps for confirmation. 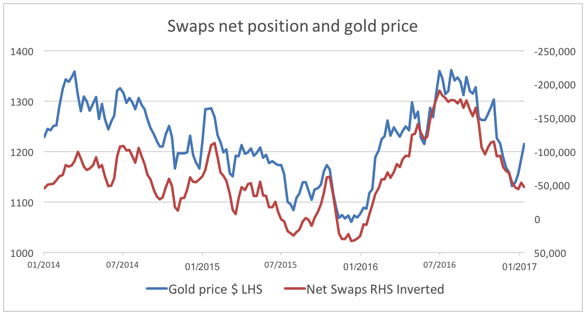 Net swaps are standing at short 45,712 contracts, compared with a long-term average of short 57,000, so on this measure the market is fairly neutral.

Taking the evidence on balance is there is latent buying power in this market, which given the strength of the rally that commenced in mid-December, is surprising. The net bearishness in the managed money category might be explained by our last chart, which is of the gold price and moving averages. 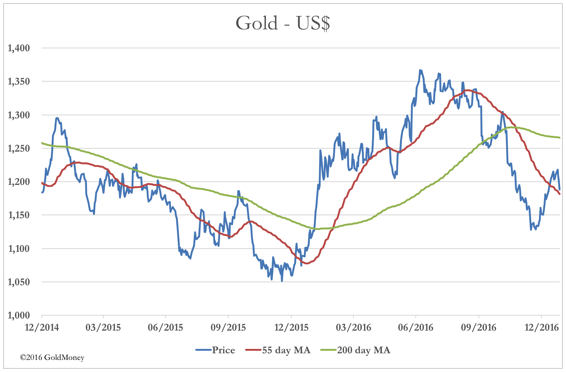 Chartists would argue that this chart is bearish, because the gold price has only rallied to the 55-day moving average, typical of a countertrend rally.

While that’s the technical perspective in the futures market, it is what happens in physical deliveries that ultimately matters, and at these price levels there appears to be solid demand. Demand from the Chinese public has soared, according to a report on Bloomberg, with Swiss-refined gold exports to China and Hong Kong in December the highest monthly total for nearly three years, just when we were being told how banks were being refused import licences. As is so often the case, it turns out that was phony information.

The other side of the gold coin is the dollar, which has weakened somewhat in recent days. All that hype about Trump and how his economic and trade policies were going to make America great again is fading, now he is President. Could it be that wiser heads, seeing that Trump’s headlong rush into poorly thought-out actions might backfire? So far, the political class is frozen in the headlights of inaction, not knowing how to respond. This is the one-hundred-day syndrome working it’s magic in favour of the new President. Markets are not bound by the same constraints, and a falling dollar would certainly reflect increasing perceptions of risk.

An unfashionable view, for certain. And various bears have been calling wolf on the dollar and US capital markets for longer than they can afford, to the point where they are now silenced. That is usually a dangerous moment for trend-chasers.