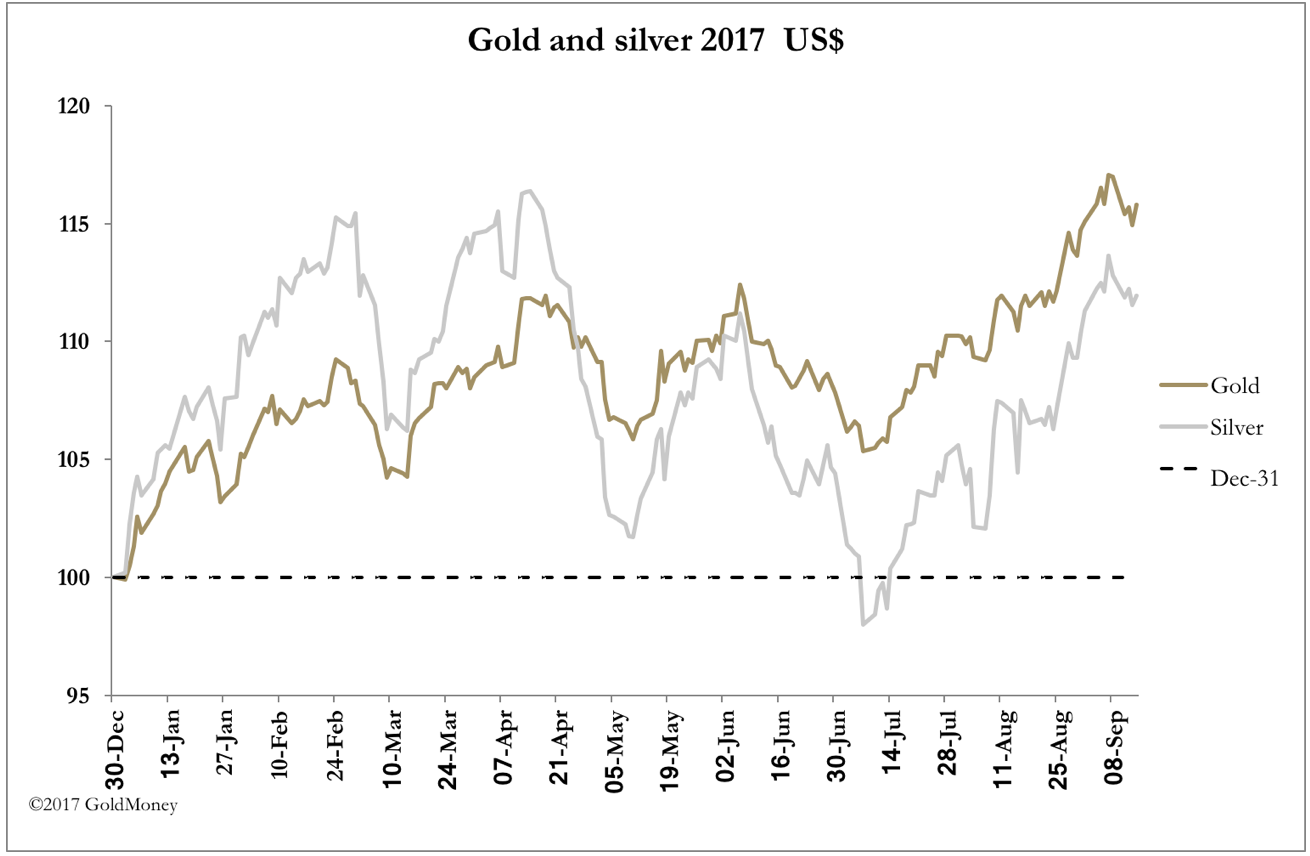 After the spectacular run from the lows of early July, gold and silver took a breather this week. Bullion markets on Comex had become very overbought, so a pause was inevitable, and healthy. In early European trading this morning, gold is down $23 from last Friday’s close at $1325, and silver off 25 cents at $17.71.

Our next chart illustrates how overbought gold had become, with the Managed Money category net longs on Comex (hedge funds) having soared. 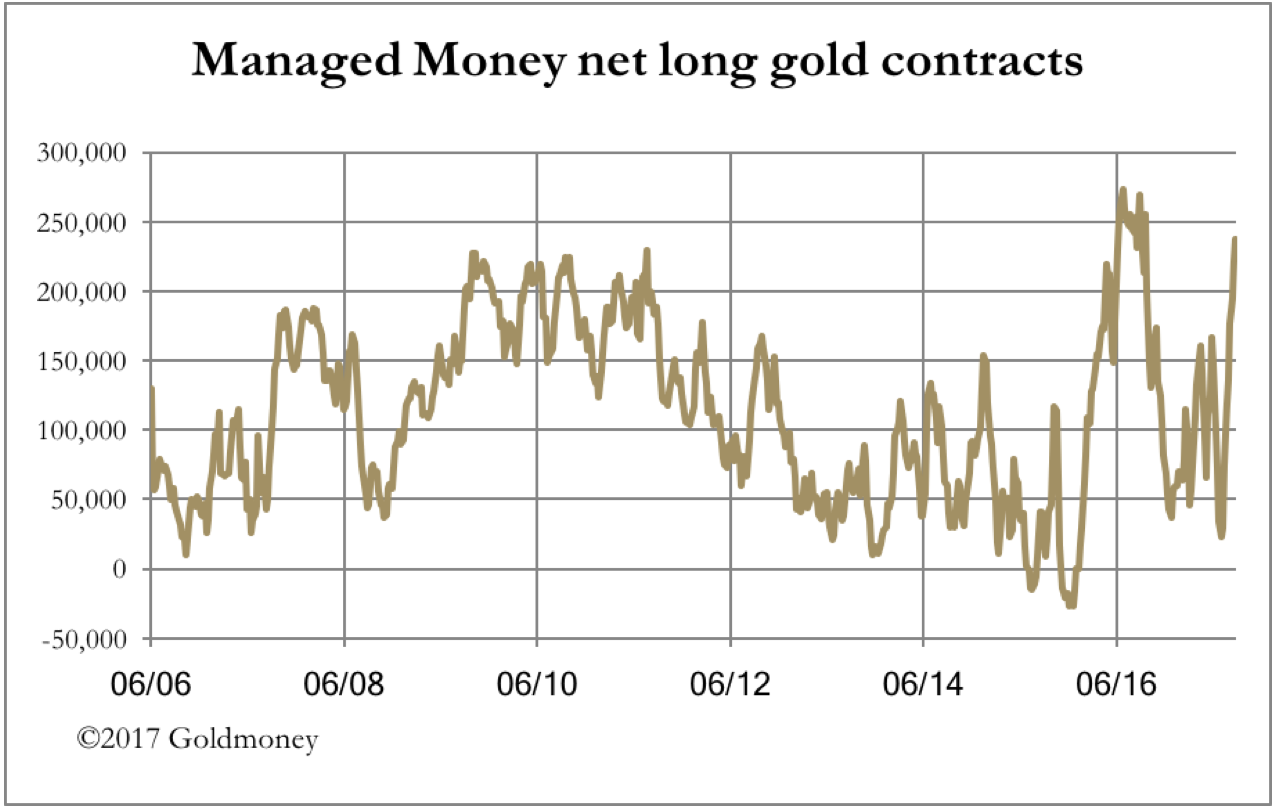 This was the position as of 5 September. Updated figures for 12 September will be released tonight. However, we know from the daily open interest figures the number of contracts rose by a further 16,000 between those dates, easily capable of taking the level of managed money net longs to over 250,000.

Silver is not so overbought as gold, as our next chart shows. This suggests silver’s consolidation will be less deep. 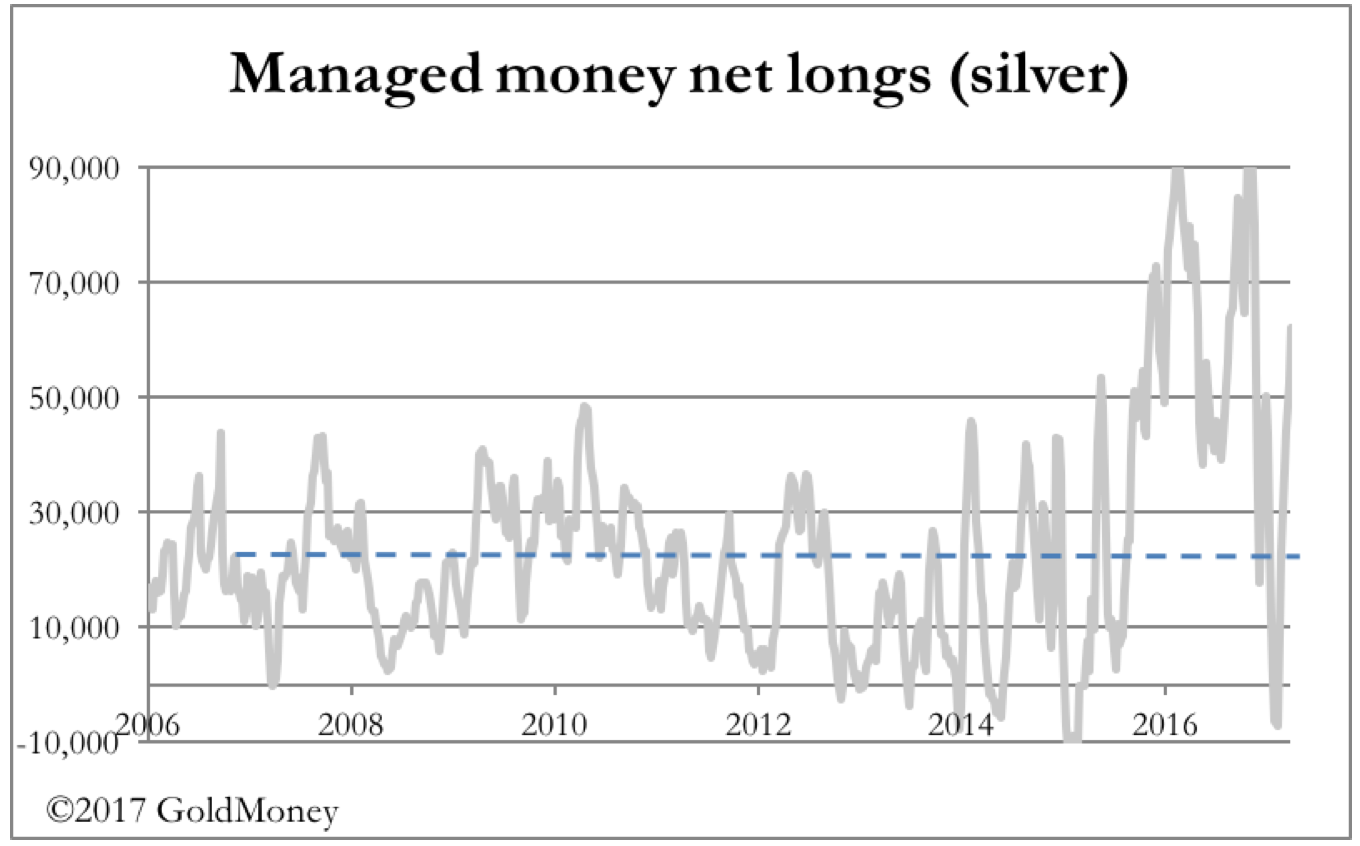 Technical analysts will be looking at gold and silver more positively. Our next chart is of gold in USD, including the two most commonly followed moving averages. 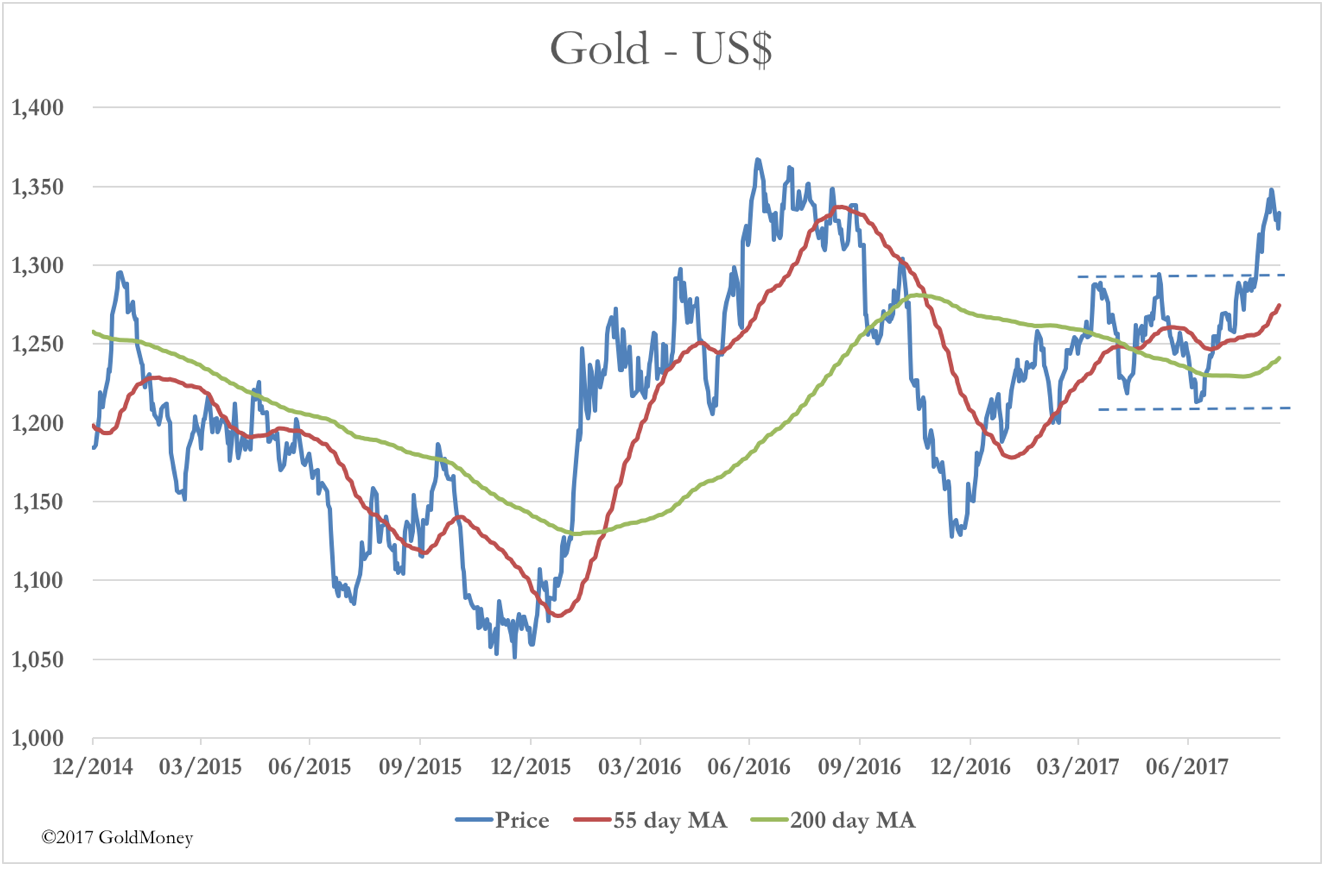 The gold price has clearly broken above the consolidation flag delineated by the dotted lines. Furthermore, the moving averages are rising in bullish formation. In flags of this sort, the rule of thumb is the move out should be of similar magnitude to the move in, suggesting that there could be one more assault on the $1350 level. However, these highs constitute a supply level, dating back to July 2016.

On balance, these old-fashioned technicals are positive, once the overbought extremes are addressed. But what is remarkable is the underlying strength in a week lacking positive news (for gold). There was a lull in the North Korean situation, though overnight North Korea fired another missile, and we await America’s response later today. There was substantial profit taking in copper, and to a lesser extent in the other base metals. The dollar’s trade weighted index steadied after declining all year.

There is a new headwind emerging in the form of potentially higher interest rates. Yesterday, the Bank of England indicated it would reverse the post-Brexit cut in its base rate shortly, and given the Eurozone’s economic recovery, questions are being asked about whether the asset purchase programme should be ceased, and interest rates raised. There is no doubt that price inflation pressures are building, with the UK’s CPI up 2.9%.

The ECB is stuck between a rock and a hard place. The euro has risen 15% against the dollar this year, and Mario Draghi is under pressure not to make things worse by raising interest rates. Meanwhile, the US economic recovery is muted, and there are uncertainties ahead over the deficit ceiling, the debate over which has been postponed until December.

On a final note, our last chart shows how the four major currencies have lost purchasing power since gold bottomed in December 2015. 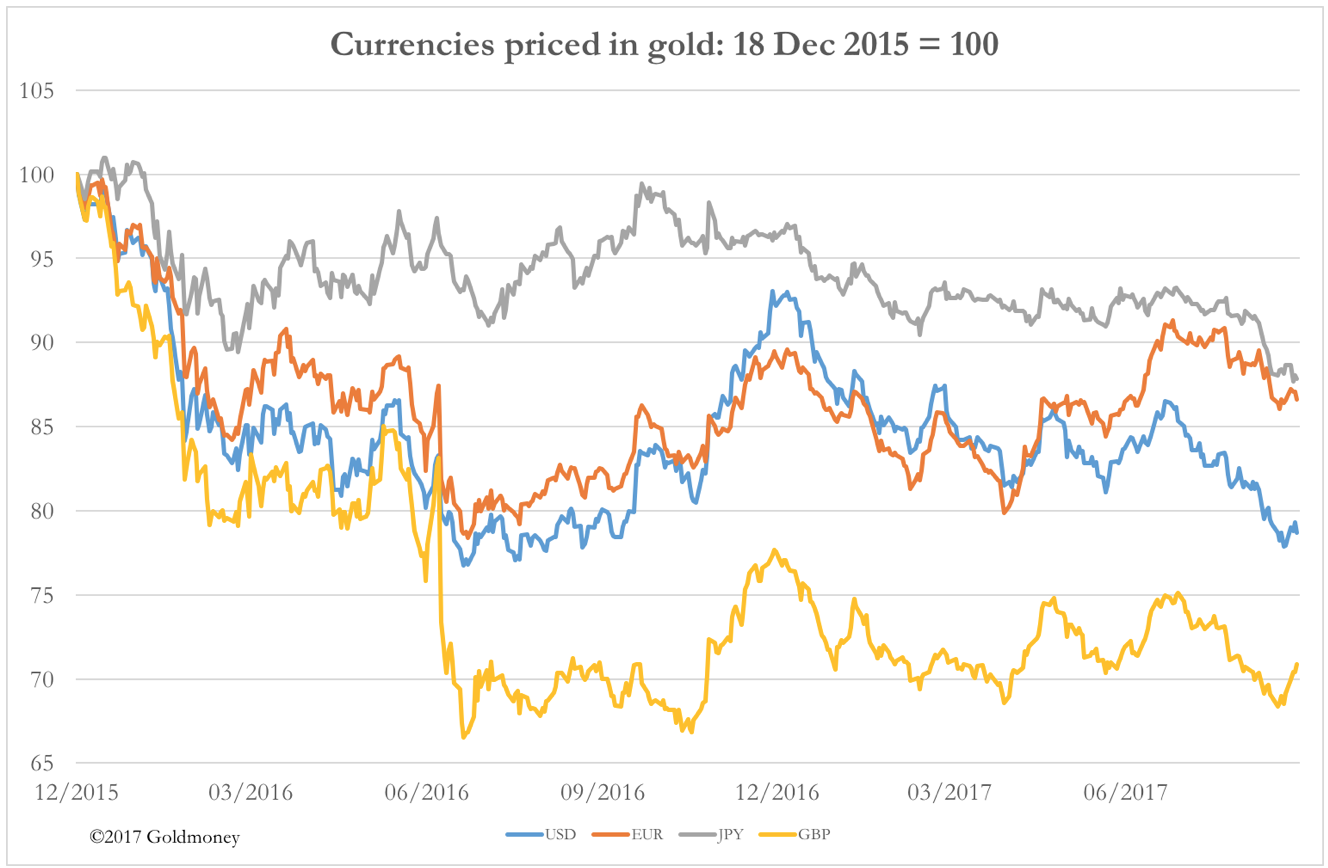