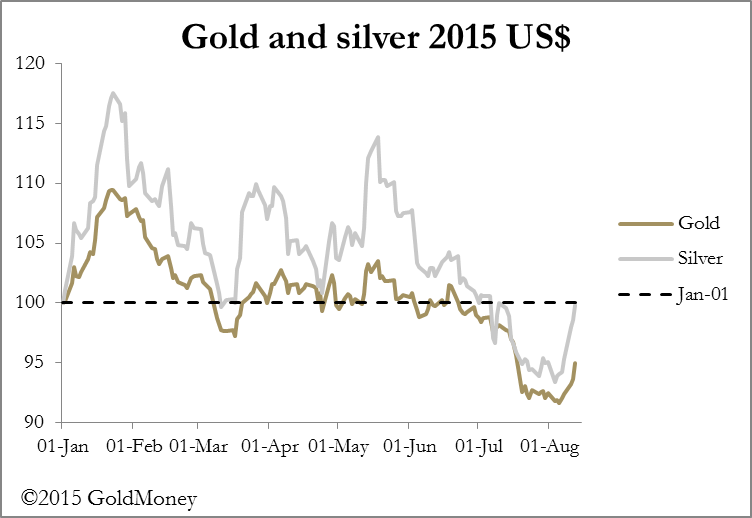 Precious metals staged a good rally this week on bear-closing, triggered by uncertainty behind China's series of mini-devaluations.

Gold recovered by 4% before dropping $10 of consolidation yesterday (Thursday). And as can be seen in the chart above, silver has recovered its losses of the year. Gold has rallied to its 50-day moving average at $1,125 and silver is above its 50-day MA which is at $15.20. There could be sufficient momentum to drive prices higher towards their 200-day MAs at $1,175 and $16.05 respectively.

News was dominated by China which moved the renminbi-dollar rate downwards by 4.6% in what has become a moving peg. This sparked a number of theories ranging from a return of the currency devaluations of the thirties to a rerun of the late-nineties Asian crisis. The motivation as always is uncertain: to a Keynesian, devaluations are a sensible response to a failing economy; to a student of the Big Game, it is a response to the IMF decision to defer the yuan's inclusion in the SDR, which was unexpectedly announced on 6 August. It could be quite simple: dollar strength over other currencies has artificially strengthened the renminbi against nearly all other currencies in recent years and has encouraged capital outflows from China. Now that joining the SDR is not on the table, it is hardly surprising that the Chinese are addressing this issue.

For now, the common belief that prevails in futures markets that gold and silver prices are headed lower has taken a nasty knock. The deflationary implications of the Chinese devaluations for the US economy have caused US Treasury yields to fall sharply, and expectations of an interest rate rise in September in the US have been deferred again. 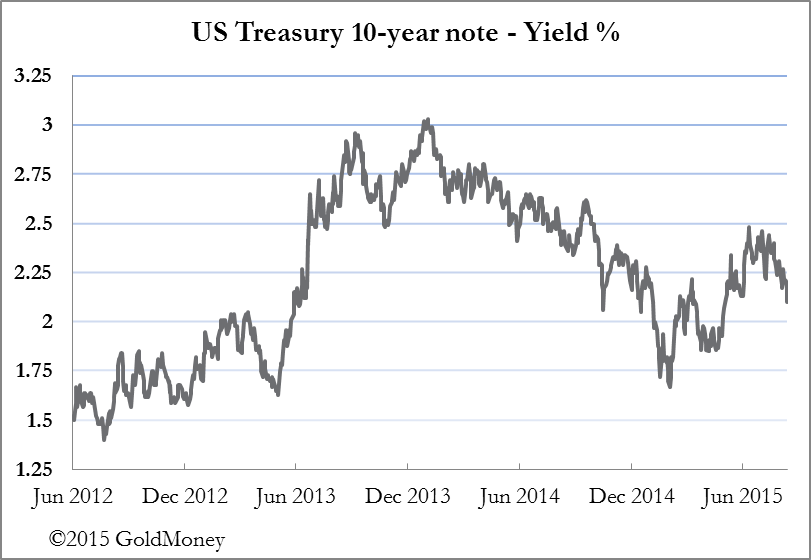 Bears of gold and silver have argued that because dollar interest rates are now set to increase, the dollar will continue to strengthen. That this outcome is now less likely undermines their position. It therefore seems reasonable to expect the bear squeeze to continue. Furthermore, there is the intriguing thought that the timing of dollar interest rate moves might now dictated by China's foreign exchange policy. So much for dollar hegemony, which is presumably the reason for the yuan being kept out of the SDR.

The burning issue for gold-watchers must be the Chinese public's reaction to currency devaluations. Assuming these devaluations have further to go, the implication is for relatively higher yuan prices for gold. Will profit-taking be encouraged, or will the public accelerate their purchases to hedge a weakening currency? Deliveries through the Shanghai Gold Exchange should be watched with great interest. The last chart is of deliveries to date. 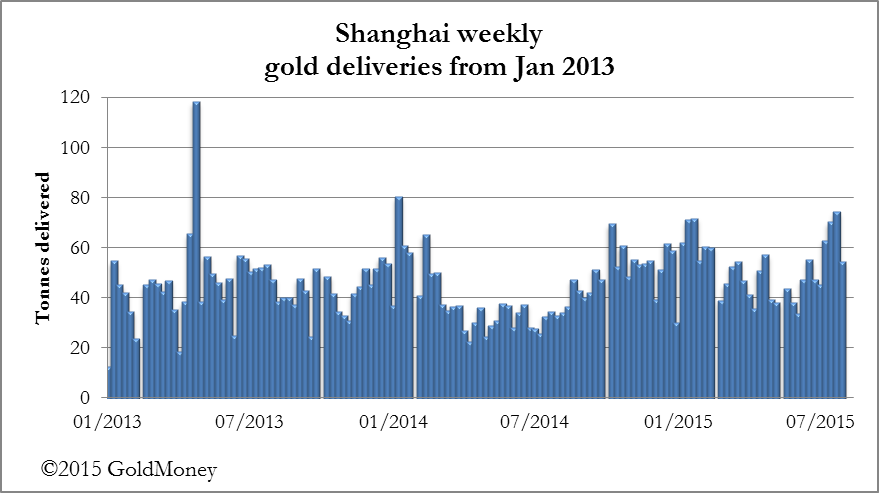