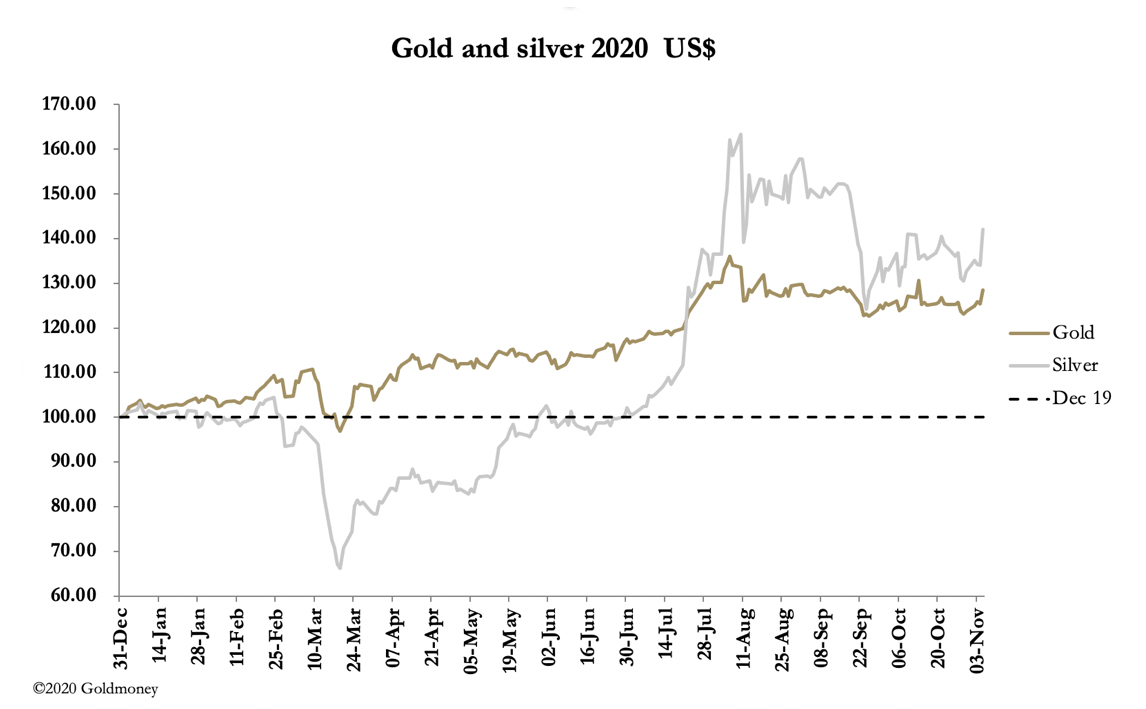 Gold and silver broke out from a three-month consolidation in an extraordinary week, which saw a political muddle in America: at the time of writing, the presidential election was still unresolved. By morning trade in Europe today, gold had risen $70 to trade at $1948, and silver by $1.70 to trade at $25.30. Bitcoin also rose, about $2000, signalling perhaps that the crowd outside the gold and silver communities most educated about fiat currency debasement are now aggressively hedging it.

The ending of the three-month consolidation is illustrated in the screenshot of the gold price, below. 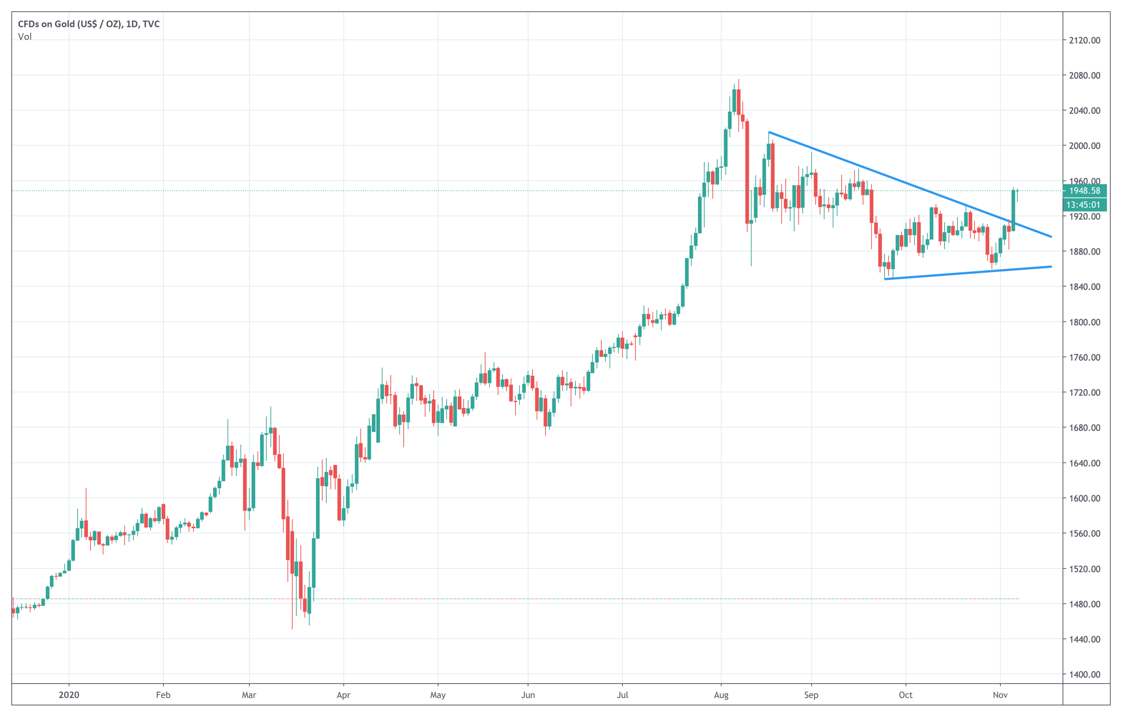 Yesterday’s breakout was accompanied by a substantial increase in Comex open interest, up 21,090 contracts on preliminary figures. That is likely to take the bullion banks’ net short position to well over $40bn — we will know more tonight when the Commitment of Traders report for last Tuesday is released.

The pickup in Open Interest is interesting, and our next chart adds some perspective. Clearly, if the price breakout follows through, Open Interest is poised to increase materially, adding to the pressure on bullion bank shorts.

At the end of this month the December contract expires, and given developing concerns about the dollar, it will be interesting to see how many gold contracts are stood for delivery. Dollar concerns can be summed up by the experience of dollar weakness during the Obama administration, which with the likely ending of the Trump era appears ready to accelerate. Perhaps it is this realisation which has led to hedge funds selling the dollar and buying gold. The dollar’s TWI is our next chart. 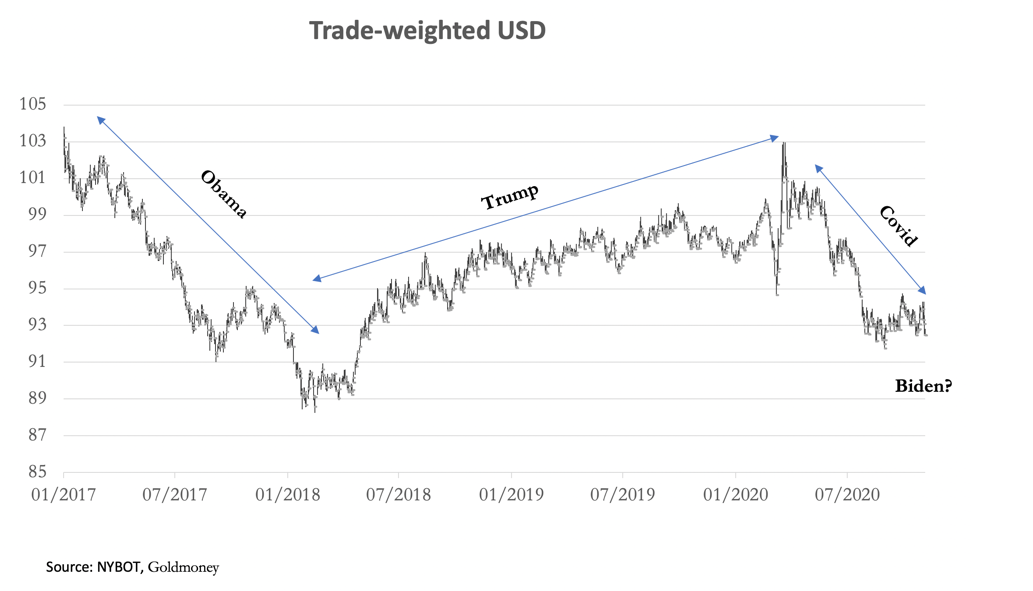 The dollar commenced a bear market under Obama, turned bullish under Trump, was undermined by Covid and now we could be back to a socialising democrat in Biden. While this sequence contributes to market emotions, the real problem is that the Fed has only one weapon in its attempt to rescue the economy: monetary inflation.

This week saw an FOMC meeting, scheduled in the wake of the election. But given the confusion of a non-result, the statement was little more than a holding operation. In the absence of an acting president, there are no fiscal plans, throwing the burden of economic planning entirely on the Fed’s shoulders.

The uncertainty surrounding political leadership may or may not be resolved in the next few days or weeks. This leaves the bullion banks, massively short, in limbo. Their gross short position at the last COT figures (27 October) was a record $54bn, and net at $39bn was also a record. Our next chart shows the history of the bullion banks’ Comex gold shorts. 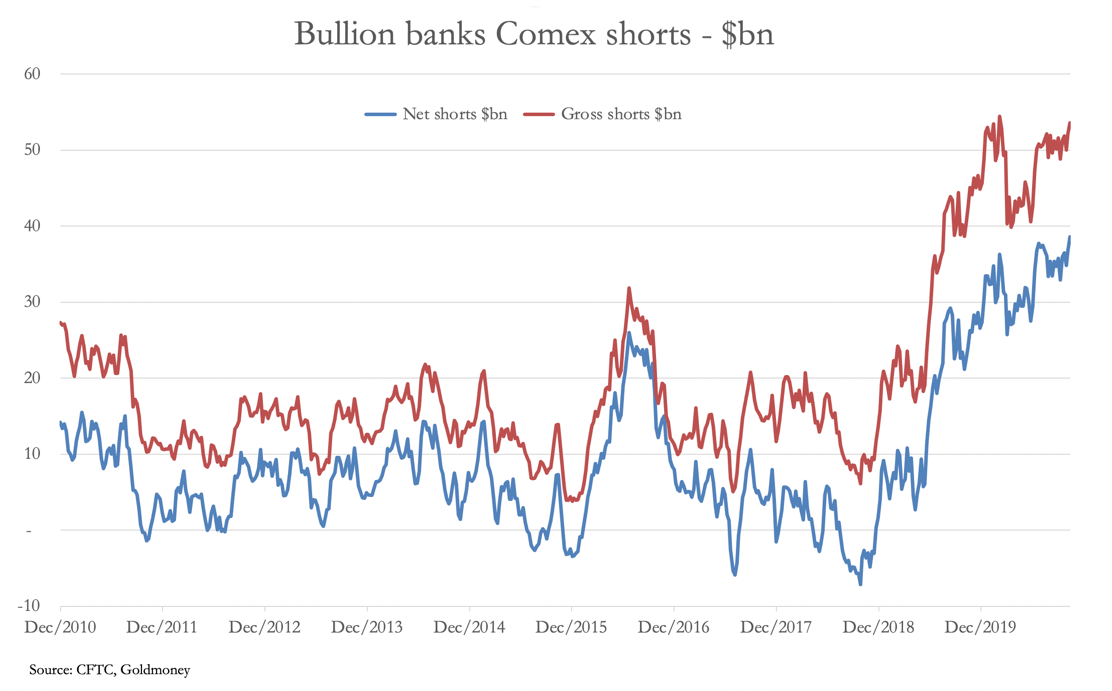 This is the starting point for the next bull leg, and for the bullion banks is likely to be a religious experience. The only hope of rescue from being bailed is for the Fed to renounce inflationism, which is extremely unlikely, or for the Treasury to dump gold on the market. That is indeed possible, but the lesson from the past (1970s) is that sales of physical gold in an inflationary era failed to suppress the price.