The signs are good. With record short positions in gold and silver, hedge funds and algorithmic traders should be worried at the lack of price confirmation: gold is holding well above its bear-market lows and silver is refusing to weaken into new low ground.

The first chart is of the Managed Money short positions in gold futures on Comex, and the second is of silver futures. 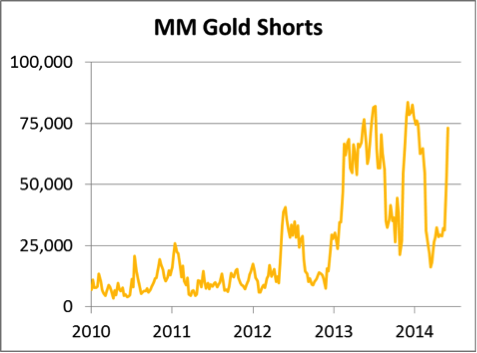 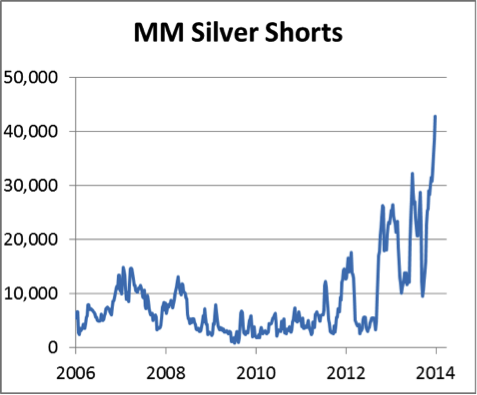 The sudden increase in shorts in both metals amounted to a dramatic bear raid. With gold rising every day this week the squeeze is now on, suggesting in the absence of any new and material factor the current rally should have enough legs to take gold to the $1300 level. The situation in silver is likely to have a more dramatic outcome, with the caveat that the active July contract is running off the board.

It is notable however that open interest in silver has been steadily growing to near-record levels for the last eighteen months, which tells us that buyers are absorbing everything the bears are throwing at the market. This is shown in the next chart. 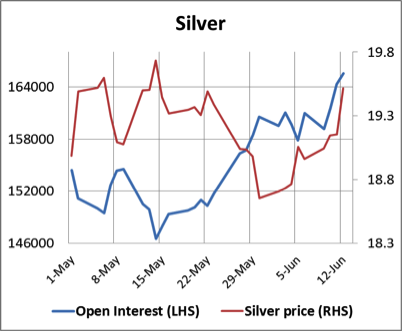 The big news this week came on Wednesday, when Al-Qaeda affiliated rebels in North-Western Iraq took the cities of Mosul and Kirkuk. In the process they captured a large amount of military hardware and are now well equipped. This morning Iraq's problems appear to be spreading into a wider Sunni insurrection, with Kurdish tribesmen also rebelling against Bagdad rule. Importantly, the Kirkuk-Ceyhan pipeline, which takes oil to the Mediterranean, as well as the Kirkuk Oilfields themselves were first to be affected, and oil prices rose sharply on the news. Indeed, all Iraq's oil production could be threatened. Higher energy price assumptions are likely to influence economists' forecasts of economic growth in US and other markets.

Economists had been downgrading growth prospects already. In the US first quarter GDP expectations have been revised to a contraction of as much as 1.6%, and the Fed's forecast of 2.8% growth for the whole year is now looking too optimistic. The US is not alone: Japan and the Eurozone are fighting deflation and China is trying to rein in credit growth. In short, the conditions that have led to low bond yields and highly-valued stock markets may be changing for the worse.