Comex Gold Swaps are short 50,000 contracts even with rising gold and silver prices. 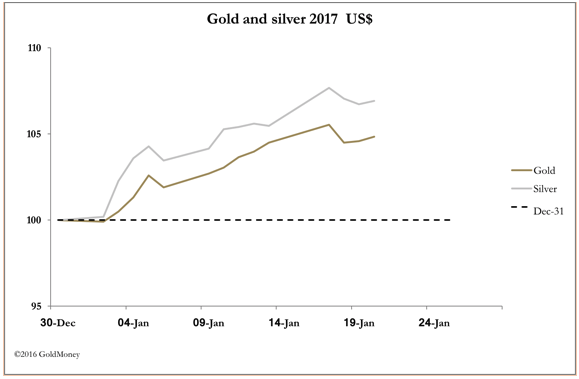 This week saw some consolidation of the rise in gold and silver prices since the start of the year. This is hardly surprising, because in four weeks, gold has risen from an intraday low of $1122.9 through $1200 with very little consolidation. Therefore, to tick back from $1219 to find support at the $1200 is only to be expected.

The underlying tone was one of physical shortages, making it hard for the bullion banks to close their short positions. Consequently, by early trade in Europe this morning (Friday), gold was up a net $6 on the week at $1206, and silver up 12 cents at $16.92.

The next chart shows the dilemma faced by the bullion banks. Their net swaps on Comex are still short by over 50,000 contracts, compared with last year in early January, when they managed to get an even book. 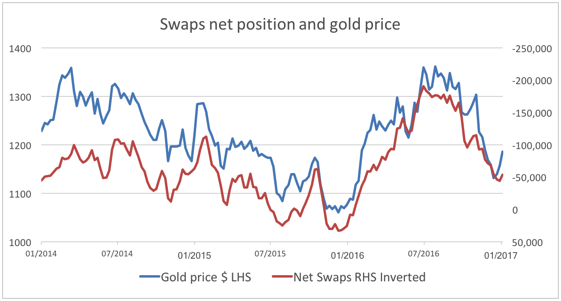 It was as well for the banks that they had squared their books at that time, because institutional demand for gold futures was overwhelming. Last year, by early July, the net swap short position hit a record 191,099 contracts, nearly double the previous peaks. On this measure the bullion banks were in deep trouble, and it required a concerted effort to bring the position back under control. Luckily, they were finally rescued by the surprise Trump victory, because after initial confusion, bond yields and the dollar both rose when markets decided Trumpenomics would stimulate the economy. This allowed the bullion banks to push prices down forcing hedge funds to close long positions. Open interest fell from 657,776 contracts to 393,524, the equivalent of 822 tonnes of gold. But even that has not been enough to close all the bullion banks’ shorts.

We can say with confidence that the gold price was driven below where it would otherwise have gone by these antics. The proof that prices were artificially suppressed is seen in the strong demand triggered for physical gold, which has cleaned out the market. This has occurred at a time when Indian demand was disrupted by lack of domestic currency, following Modi’s banning of R500 and R1,000 notes, representing 86% of all currency in circulation. Also, there were stories that the Peoples Bank of China was restricting gold import licences.

If that was true, it would be an about-turn on Chinese gold policy. China seeks to dominate global physical demand and trading, and moves like this are counterproductive. However, the Indian story is correct, leaving us with the conclusion that central banks themselves are emerging as the largest buyers in the market, more than absorbing the freed supply.

This was the week that Theresa May spelled out her Brexit plan. Volatility in sterling ensued, first taking gold up to over £1,000 and then down to £976 per ounce. And on Thursday, Mario Draghi at the ECB came out with a gloomy statement, justifying continuing QE. The result was the euro edged lower against the dollar, finding some short-term support at EUR1.06. 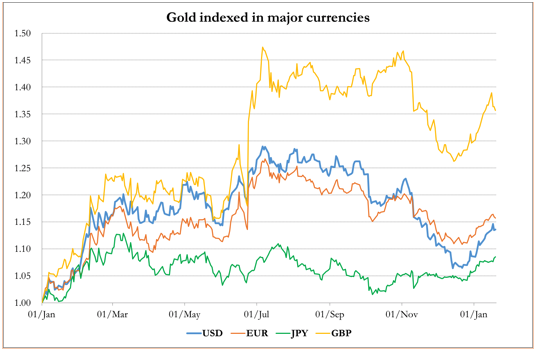 The uptick since mid-December is noticeable in all currencies. Let’s see how inflationary President Trump turns out to be.