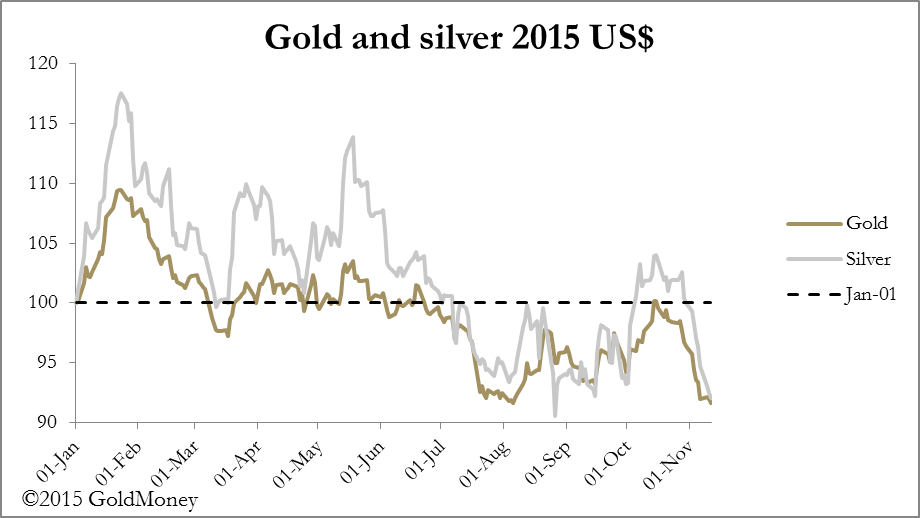 Gold and silver had a torrid week, driven down to $1075 and $14.20 respectively yesterday afternoon (Thursday) London time before recovering slightly.

The background was renewed dollar strength reflected in commodity weakness, but the market action was all about the bullion banks driving gold and silver prices down on the futures market so as to close their bear positions. The only limit to these actions is the growth of physical demand from value buyers, though this is being offset to a degree by physical ETF liquidation.

Chinese demand is understated in WGC estimates. Deliveries from the Shanghai Gold Exchange into public hands, including gold for jewellery fabrication, totalled 810.75 tonnes in Q3, a rise from 553 tonnes in Q2, and up by 61% from Q3 last year. Annualised deliveries to the Chinese public alone amount to 2,652 tonnes this year, compared with annual mine output of about 3,000 tonnes.

One wonders about the quality of the other WGC figures given their reluctance to accept the SGE's numbers, which appear to be goal-seeked to mine and scrap totals. Putting that issue aside, it is no wonder that Asian demand is high, when we look at gold prices expressed in the currencies of the major Asian buyers: the Chinese yuan, Turkish lira, the Indian rupee, and the Saudi riyal. This is illustrated in the next chart. 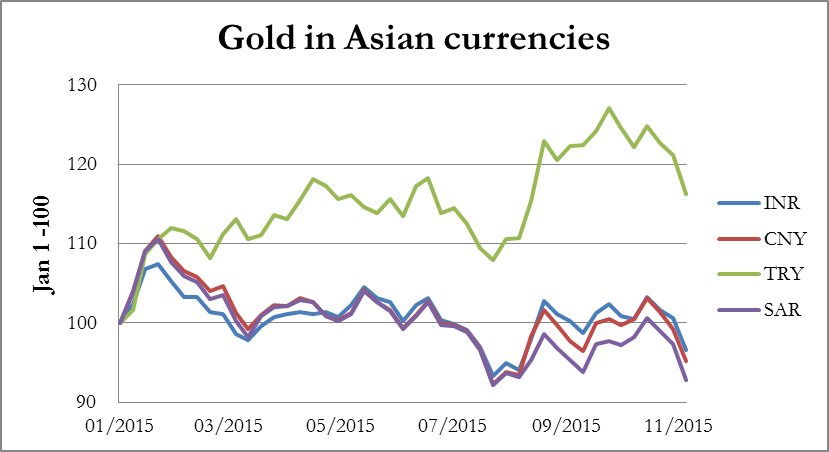 Apart from the perennially weak Turkish lira (TRY), gold is now cheaper than it was at the beginning of the year in the other Asian currencies. Given the nationals in all these countries view gold as real money and an effective hedge against government paper, it is hardly surprising that physical demand is hitting new highs with prices at these levels.

The dollar's strength, the quoted reason for gold's weakness, arises from the Fed's interest rate policy, which is wholly at odds with economic reality. The only figures anywhere that show any optimism are heavily massaged government statistics, from China to America. Realism is reflected in industrial surveys, commodity prices and bulk transport rates, all of which indicate that the global economy is in dire straits. If the Fed does the logical thing next month, it will defer its intended interest rate rise until further notice, and switch its policy emphasis from unemployment and inflation to inflation alone.

Volumes on Comex increased noticeably this week, indicating growing support on lower prices, even though Open Interest generally fell. Open Interest is the subject of our last chart.

It looks like the speculators are now purged. Of course, there is nothing to say they won't go the other way and open bear positions, driving prices somewhat lower. However, it is possible that the bullion banks will choose to absorb any such selling to square their books, given the strong demand for physical metal at these levels, rather than get too greedy for lower prices. That being so, the current price weakness might soon end, particularly if ETF sales dry up.