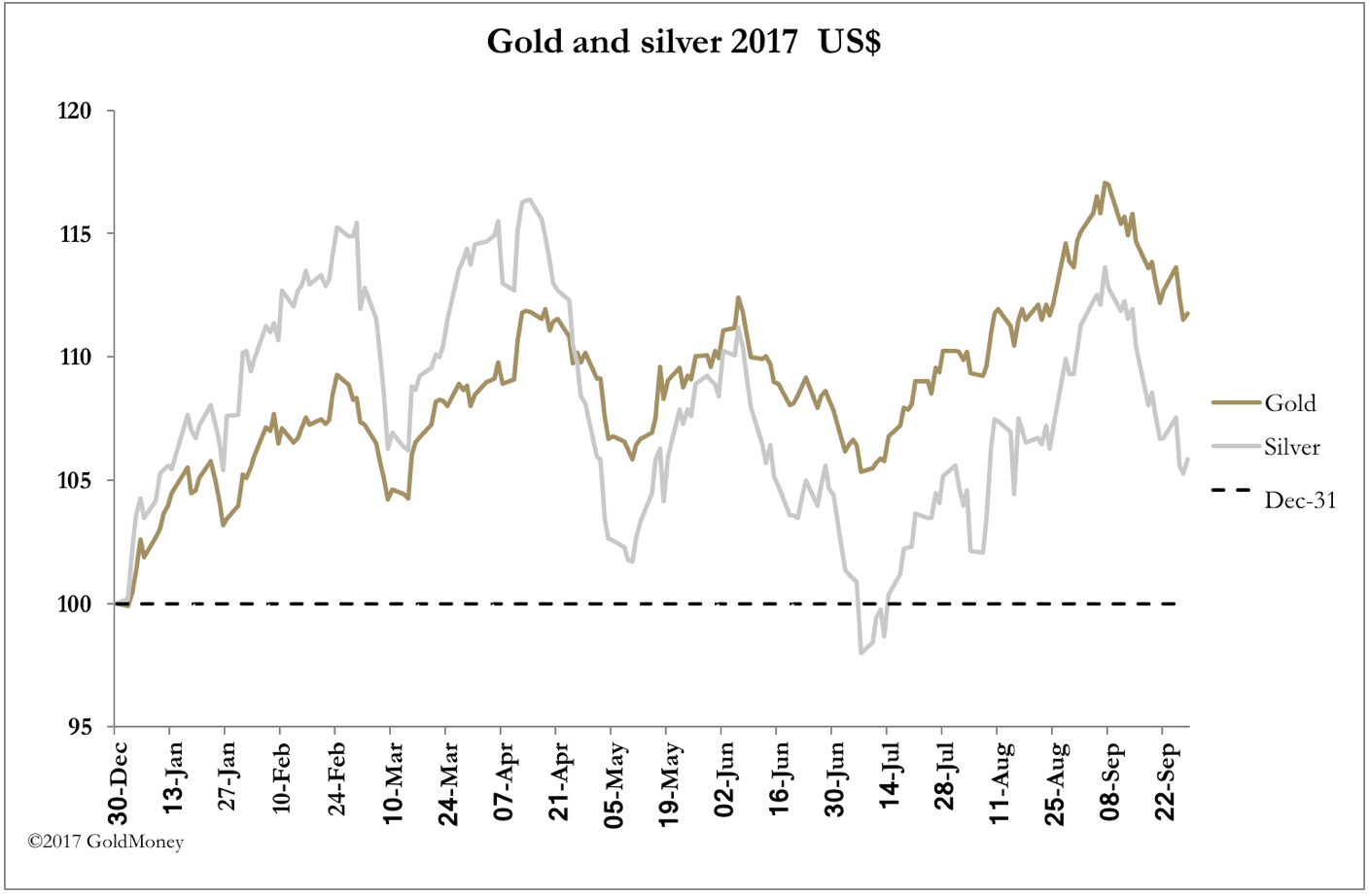 Since 7 September, the yield on the 5-year US Treasury bond has risen from 1.64% to 1.9%. There can be little doubt that this move, and the potential for this yield to exceed 2% is having a negative impact on precious metals. To ram the point home, Janet Yellen warned us this week not to be complacent about interest rates.

By early European trade this morning (Friday), gold had fell $8 to $1288, and silver by 15 cents to $16.85 since the previous Friday’s close. Gold, having become very overbought on Comex, has now scrubbed off nearly $70, the speculators having become badly wrong-footed yet again. However, technically this reaction is a normal correction back into an area of support, as our next chart illustrates. 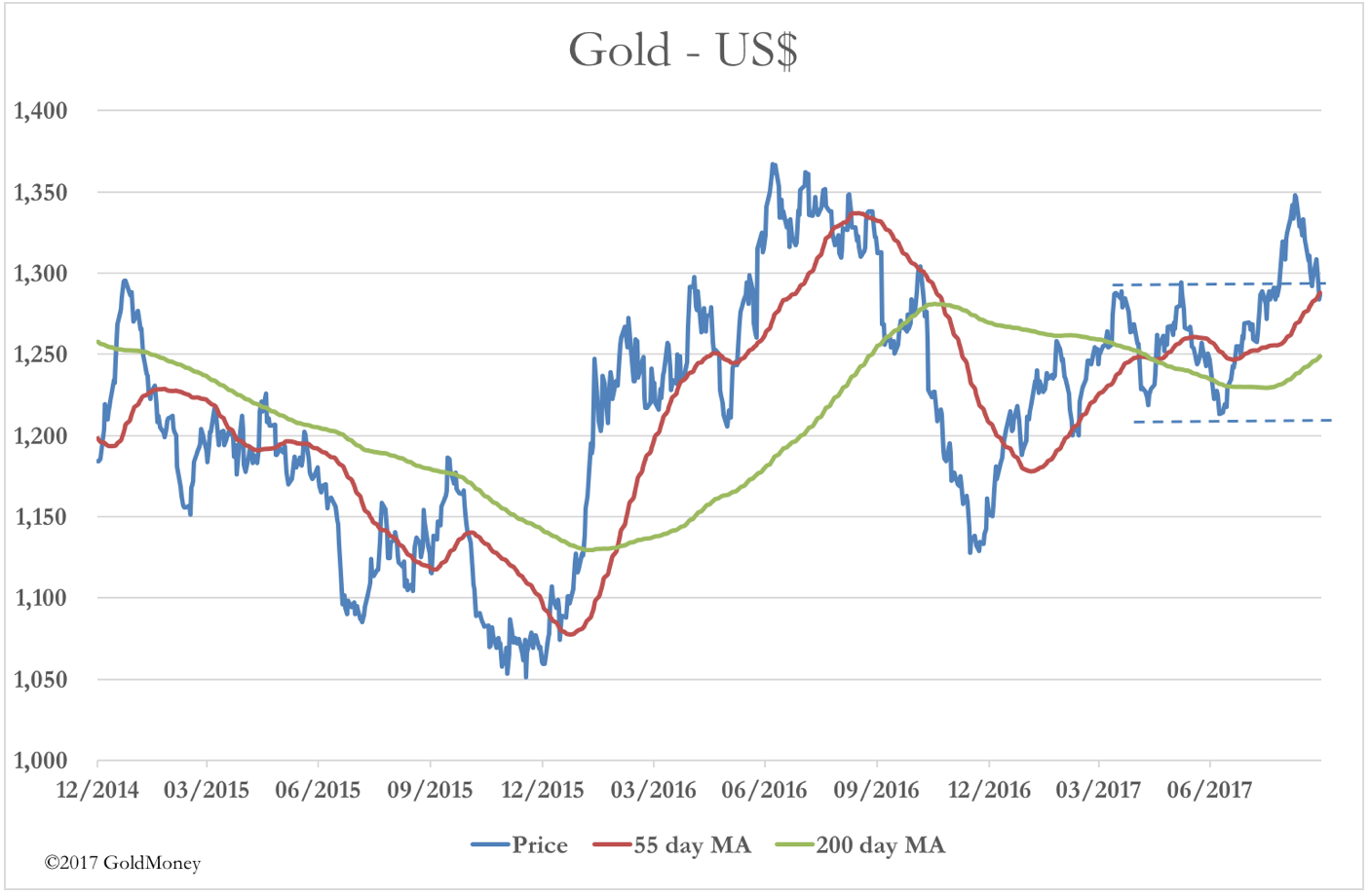 This support area is indicated by the dotted lines, and the fall back to the 55-day moving average is also normal for a correction. On this basis, we can expect to see some buying emerge, probably of physical gold rather than Comex paper.

There is a case for linking the decline in the gold price with the run up to Golden Week in China. The reasons why this should be so are not entirely clear, other than for the last three years it has been the case. But it is also quarter-end, which could be much more important, because bullion bank traders will want to see prices as low as possible for accounting reasons.

Given the chance, bullion banks will likely mark gold and silver down even more. And this is where bond yields could be important. What they appear to be signalling is that the long-awaited return to interest rate normality could be about to happen, hence the importance of the rise in short-term bond yields in recent weeks. Indeed, gold topped out on the same day as the price of the 5-year UST.

I have recently argued that central banks must change their interest rate policy, because they badly underestimate economic strength. The link to the relevant article is here. The US economy is relatively subdued, because it is not participating in Asian-driven change. However, the Eurozone, Japan and the UK are receiving a significant boost from China’s expansionary policies, so interest rate policy in these major economies is badly out of kilter.

Short-term German bonds are badly mispriced for an expanding Eurozone economy, with the 2-year Schatz bond yielding a negative 0.7%. Eurozone banks have been very slow to sell down their overpriced government bond holdings, and expand bank lending, mesmerised perhaps, by their bad debt problems in Italy et al. Furthermore, the ECB is mispricing debt markets with its monthly asset purchase programme of €60bn. It is no longer a case of if but of when this will change. And when it does, we can expect financial carnage in euro-denominated bonds.

Gold and silver prices will have to weather this storm. However, forward-looking investors will note that the expansion of bank lending into the non-financial economy will bring price inflation with it. And because central banks are limited in their ability to raise interest rates, real rates could become more negative than they have been at any other point in the cycle. These are bear market prospects for bonds and equities, bullish for non-financial assets notably property, and particularly bullish for gold and silver.