Gold and silver continued their consolidation after the April lows, trading in narrow ranges with a firm undertone. Attention is now firmly focused on Chinese and Indian demand for gold, which between them is absorbing all non-Asian mine supply.

Chinese net purchases of gold totalled 320.54 tonnes in the first quarter 2013, with purchases in March alone being 130 tonnes compared with February’s 97 tonnes, according to official statistics. Note that the March total was before the drop in price in April when demand accelerated further.

What is particularly interesting is the way Chinese demand appears to be increasing while her economic growth is slowing. This suggests that it would take a severe slump to deter buyers, and in the short run savers seem to be prepared to devote more of their savings to precious metals even at the expense of other savings alternatives.

To put this in perspective, the chart below illustrates the motivation for Chinese, Indian and Turkish nationals, numbering about 2.6 billion people, who prefer gold over their governments’ currencies as a store of value. 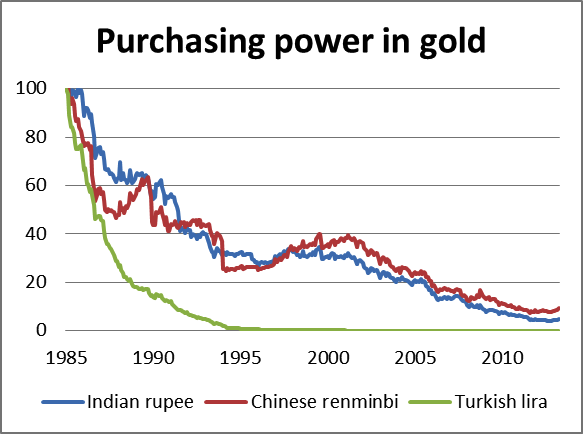 These currencies have been rebased in the chart to 100 as of January 1985, and it clearly shows how they have declined since. The rupee has fallen over 95% in gold terms, the renminbi 90% and the Turkish lira is practically valueless having lost 99.5%. The importance of Turkey is that she is the Muslim world’s commercial gateway into Europe, with significant trade links into the Levant, the Caucasus and the Gulf.

This explains why any drop in price is seen as an opportunity to ditch paper for bullion. And in China, Bloomberg reported on Wednesday that the Chinese have bought more than 300 tonnes of gold since the mid-April price drop.

Finally, there has been a big jump in gold open interest, which can be seen in the chart below:

Given the bearish sentiment in paper markets, it seems unlikely that hedge funds and small speculators are buying much. Therefore, we are left with fabricators and swap dealers, the former category looking perhaps for delivery and the latter hedging shorts in other markets. All will be revealed in tonight’s Commitment of Traders Report.

There are persistent stories of wealthy customers attempting to take possession of their gold from the bullion banks. LBMA rules are quite clear on this point: allocated bullion is the property of the account holder, so must be given up to the client on demand, while unallocated accounts, representing the vast majority, can be paid out in cash equivalent. It would be very surprising in the wake of events in Cyprus and subsequently the bullion markets if bullion banks were not under pressure to deliver and are offering the cash alternative.

Look out for further signs of shortages of physical gold. Open interest in silver has been reduced over the last fortnight, and now has the potential to increase, ending the bullion banks’ attempts to close down their short positions.

Here is the list of next week’s more important statistical releases.