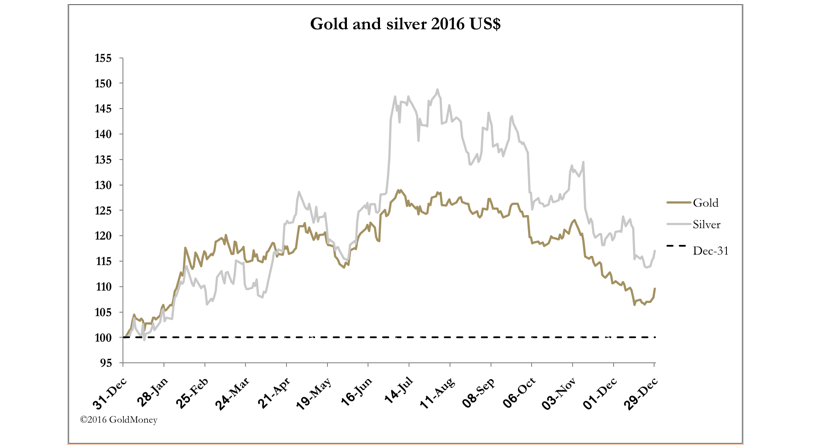 The last trading week of 2016, shortened to only four days with some markets closed an extra day, saw gold and silver rally in quiet trade.

The next chart records gold’s performance in the four major currencies, USD, EUR, JPY and GBP for 2016. 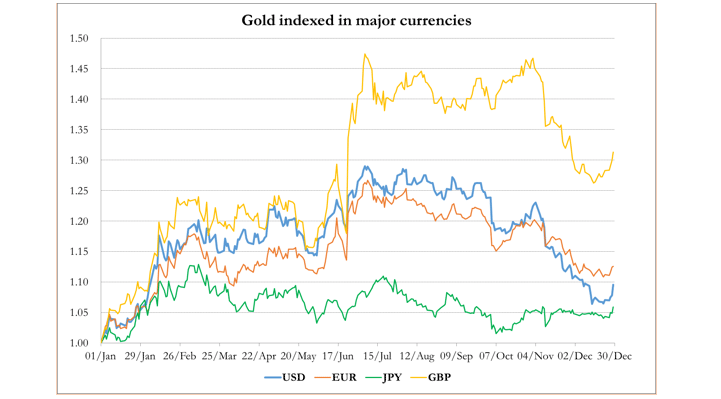 2016 saw two major political surprises, Brexit and the election of Donald Trump as the next US President. The first shock drove gold prices higher, while the second drove them lower. On Brexit, sterling suffered a large fall, while the euro hardly stirred. On Trump’s victory, after a shaky start, the dollar rose strongly.

The outlook for the dollar against sterling and the euro looks positive, because of the difference in monetary policy. The Fed raised the Fed Funds Rate by one quarter of one per cent in December, and proposes four further increases during 2017. This raised interest rates all along the yield curve, inflicting significant losses on bond holders. Meanwhile, the Bank of England recently cut its base rate to 0.25%, and the ECB held its deposit facility rate at -0.4%. As long as these differentials exist, the dollar is expected to remain strong against sterling and the euro on monetary policies alone.

However, on terms of trade, the US has an annual deficit with the EU running at $140bn, and is in surplus with the UK by about $2bn. Excluding capital flows, the dollar should weaken against the euro and not change much against sterling.

Admittedly, capital flows are considerably larger than the US’s trade deficit with the EU, but assuming capital flows into the dollar slow down, one can see that there is potential for the dollar to weaken. Furthermore, the dollar is by any measure extremely overbought, suggesting the end of capital flows may be in sight.

The reason this matters for gold, and to a lesser extent silver, is that hedge fund managers sell precious metal futures to go long of the dollar, and it is this which has driven gold and silver lower in the final quarter of 2016. Commentators in their expectations for the gold price are now uniformly bearish. These are essentially trend-chasers dressing up their negative sentiments into a fake analysis. There are some so-called specialists in cycle theory, talking gold down to under $900. But no one knows tomorrow’s prices, and it’s worth observing that sellers of trading services make their money from selling trading services, and not so much from trading. If it were otherwise, why not just make money from trading?

We can dream up all sorts of scenarios that could drive gold lower. Perhaps the Italians will sell their gold to bail out their banks. Perhaps the Fed will be converted to sound money, driving highly indebted businesses into the ground. All we know is the dollar is wildly overbought, signalling the bubble is in the dollar, and at some stage it will fall very sharply and gold will rise.