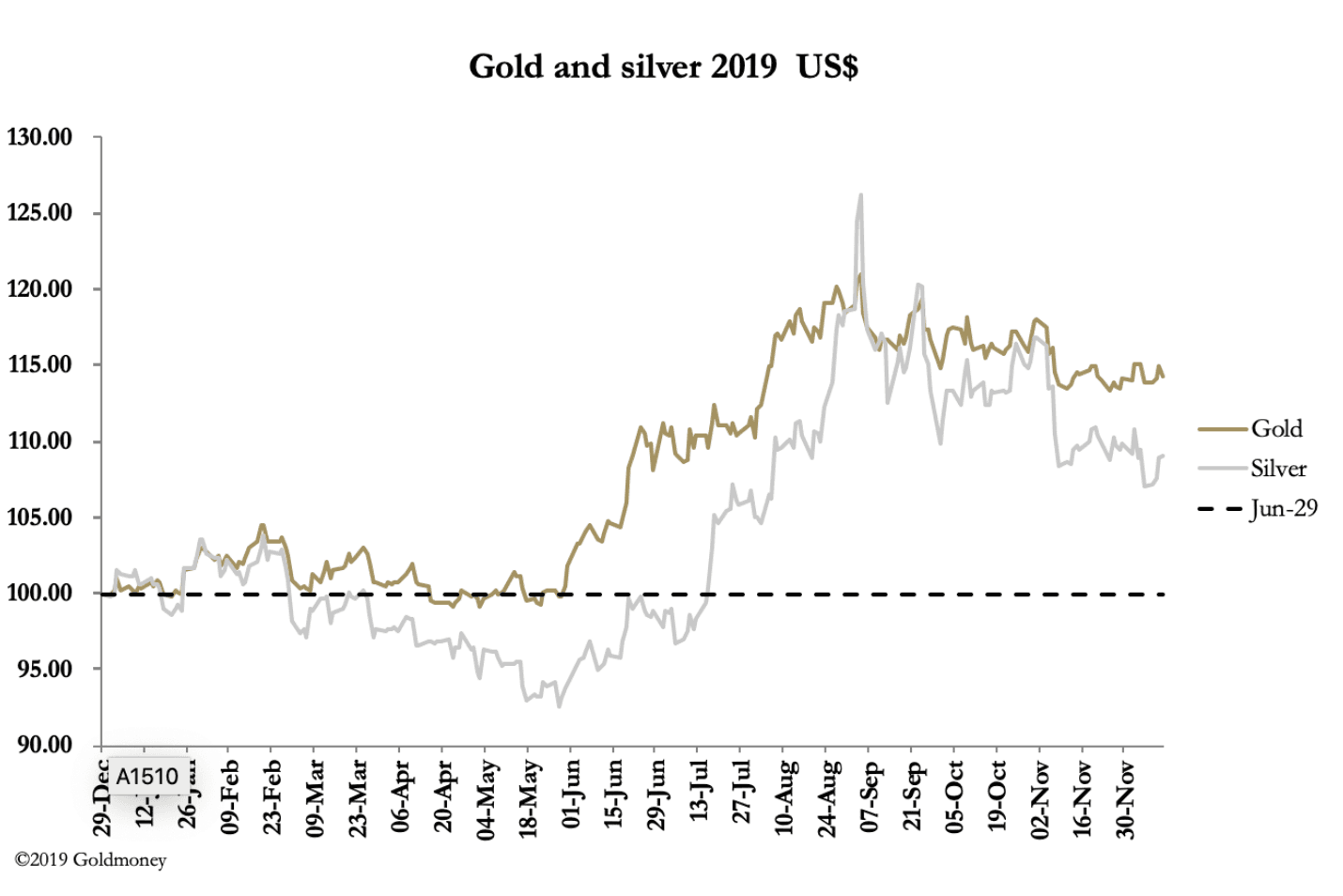 Gold and silver made net gains over this week, with gold rising $12 from last Friday’s close to trade at $1472 in early European trade this morning. Over the same timescale silver rose 43 cents to trade at $16.97. Volume was subdued, except for yesterday when the Fed announced its interest rate decision (no change). But the Fed also announced that both short-term and repos over the year-end could increase by as much as $365bn. This spiked gold yesterday to $1486.

But then out of the blue President Trump reportedly signed off on a reported Phase 1 trade deal with China. The dollar rallied, and gold rapidly fell back to $1465 before recovering slightly.

Repos have emerged as a systemic problem

Note: a repo is a collateralised loan, where the initiator swaps securities, typically T-bills, for cash, to be repurchased (unwound) later at the same price. The provider keeps the interest on the collateral, but the initiator then has cash to fund other things. Commercial banks use them as a means of building excess reserves at the Fed. Hedge funds use them to gear up interest rate swaps in the foreign exchange markets 10-20 times. Now read on…

On 31 December there could be up to half a trillion of repos outstanding with the Fed. The basic problem is that global systemically important banks (GSIBs) must demonstrate their 30-day outflows are prefunded by excess reserves, in accordance with Basel III regulations. But GSIBs are up to their necks in US Treasuries and have provided repo funding (technically, reverse repos) for some very large hedge funds and do not have the excess reserves to fund their own US Treasuries and those of the relative value (RV) hedge funds, whose arbitrage exposure is in interest swaps in the foreign exchange market.

Without the Fed’s intervention, the GSIBs will be forced to dump US Treasuries and cut their reverse repo exposure to the hedge funds, which means current positions can only be rolled by smaller banks with excess reserves, or foreign banks, such as the Canadians. But the RVs’ positions are extremely large and cannot simply be transferred to other banks.

These actions are likely to spike bond yields, crashing markets, and create a scramble by the RVs to close their FX swaps, leading to a fire-sale of US Treasuries. This provokes memories of the LTCM crisis in 1998. Both GSIBs and RVs are likely to be big bond sellers by the year end, unless the Fed can buy collateral off the banks in sufficient quantity to rebuild the GSIB’s excess reserves.

The Fed has a technical issue. It normally conducts repos with discounted bills as collateral, but the bill market is smaller than the potential problem. Consequently, it will have to take in coupon-bearing Treasuries. While current repos are in bills, the Fed can claim it is a liquidity issue and not QE. QE is now looking inevitable, this time to resolve a problem from over-leveraged wholesale money markets. It amounts to a potential systemic crisis which could take down the large RV hedge funds

Despite the spike in USD bond yields, it should be good for gold, because of the potential run on the dollar as the RVs are forced to unwind their currency swaps, being currently long dollars and short yen and euros.