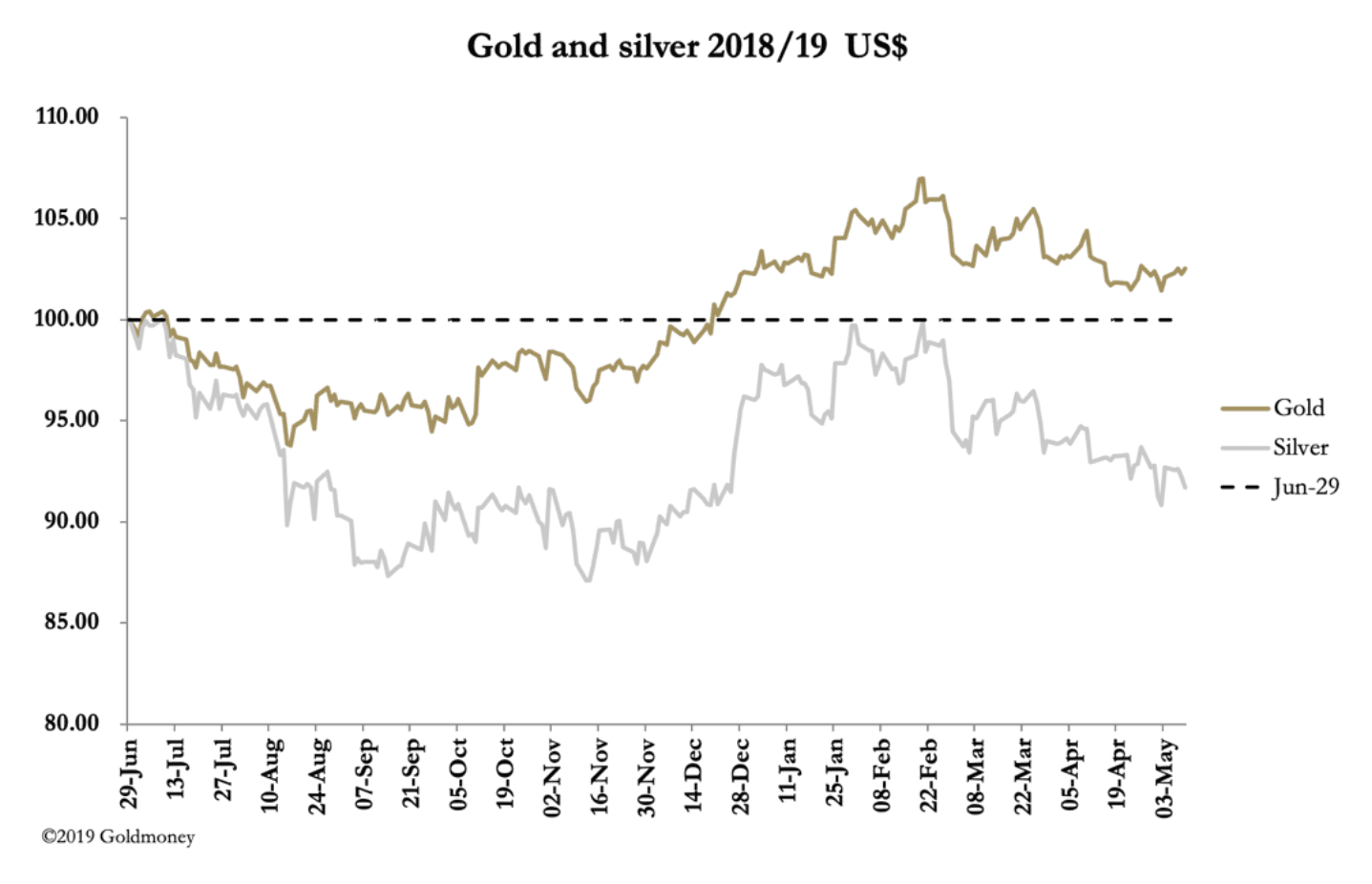 This week, gold traded in a very narrow range, up $6 from last Friday’s close at $1285 in European morning trade. Silver drifted lower, losing 15 cents on the week to $14.79 on the same time scale. Comex volume in gold picked up a little, but in silver remained moderate. Consequently, the gold silver ratio hit new highs at 87. This is our next chart. 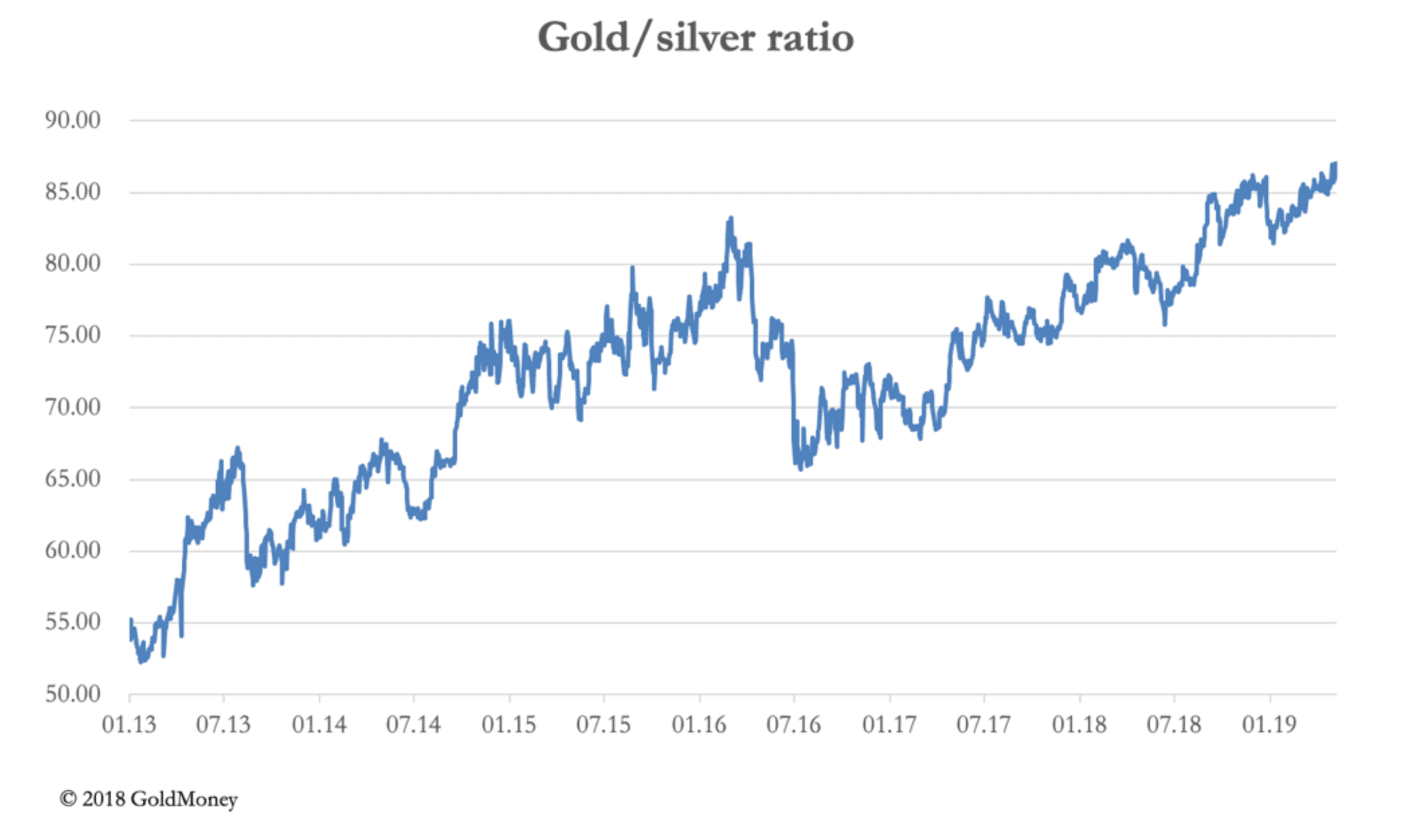 Silver’s drift lower appears to be following that of copper, which since mid-April has drifted lower by about 6%. Copper is not alone, with lead, zinc, aluminium and nickel all drifting lower in the last month. Iron ore is a notable exception, but that is down to China’s diminished stock levels and supply problems from Vale, the big Brazilian miner.

It is clear that silver is trading as if it were a base metal. Base metals are reflecting global economic prospects, which have taken a turn for the worse with US/China trade talks breaking down and the imposition of 25% tariffs on Chinese imports across the board by the US.

This is a very important development, with China refusing to play President Trump’s game. American protectionism will almost certainly drive the global economy into a deepening recession, undermining demand for industrial raw materials. Given that this negative story only escalated this week, it would appear that base metals, and presumably silver, are likely to drift lower in the short-term.

The usual currency reaction from lower commodity prices on the back of a deteriorating economic outlook is for the dollar to attract some short-term safe-haven buying. But this has been a murky market, with the dollar’s trade weighted index (mostly comprised of the euro) failing to make new highs. This is shown in our next chart, of the trade-weighted index. 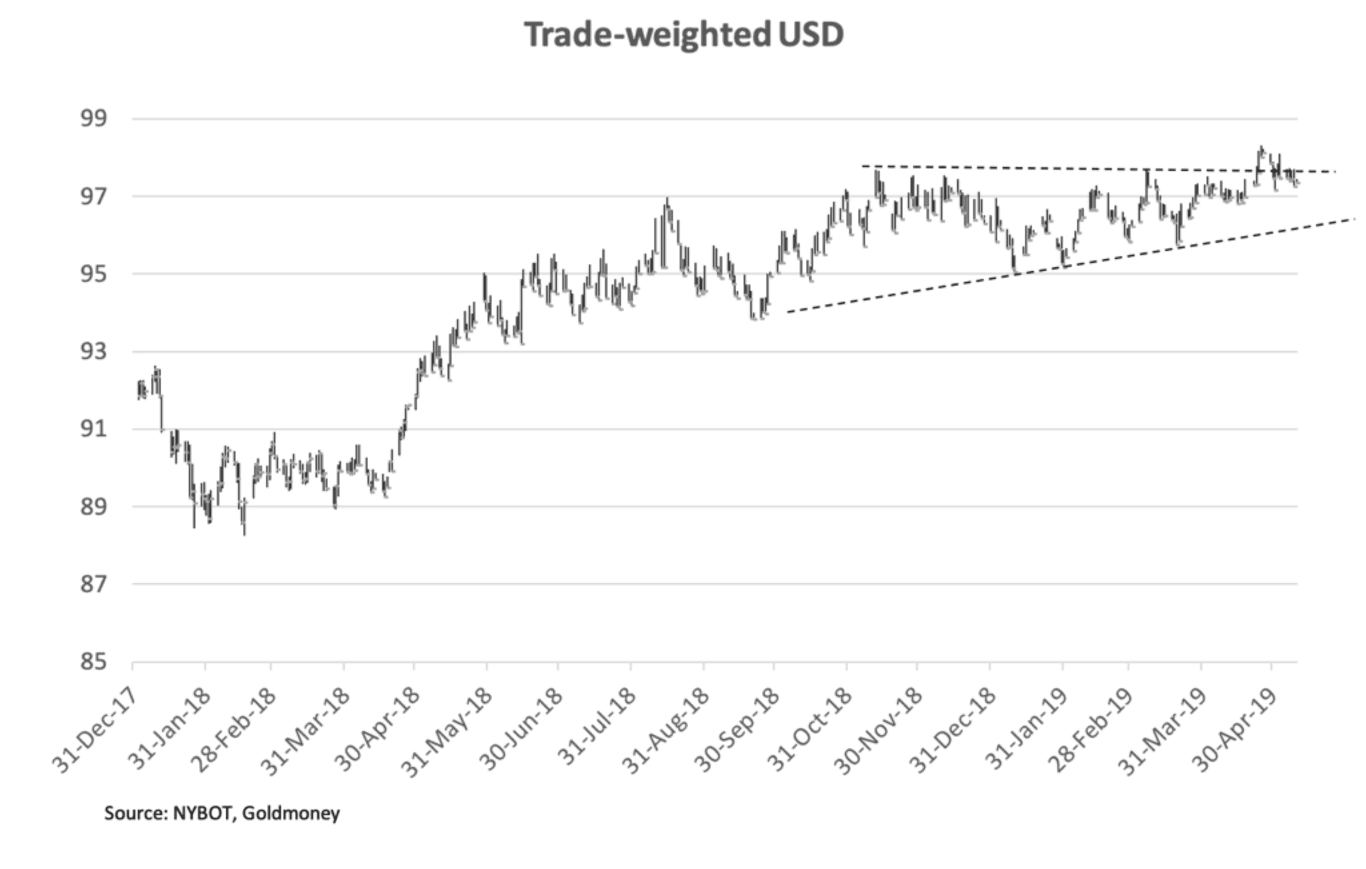 Having broken out on the upside, with the potential to run up to 100+, the $TWI has failed to follow through, dipping back to try to find some support in the 97s. If nothing else, it shows currency markets are still confused and cannot make up their mind to prioritise expectations of lower dollar interest rates (bad for USD) or bad for everyone else (good for safe-haven USD).

There is an increasing possibility that the China/US trade spat will become a very serious issue for the global economy, undermining price expectations for industrial commodities, leading to a stronger dollar. But that in turn is sure to trigger another round of monetary inflation, which is good for gold.

This is a credible explanation for why gold appears to be on hold. But despite the apparent price stalemate, funny things are happening on Comex, which can be seen in our last chart.

Note how open interest has risen over recent weeks, while the price has moved sideways. It looks like accumulation by big money. How that is split between the bullion banks and hedge funds might be revealed in the Commitment of Traders Report, released after trading hours tonight. But the signs are that the contract remains oversold, with net long managed money positions low, which can only mean the bullion banks are increasing their longs where possible. What they are doing on OTC gold markets is always a mystery, but it is noticeable that exchange-for-physicals swaps are subdued.