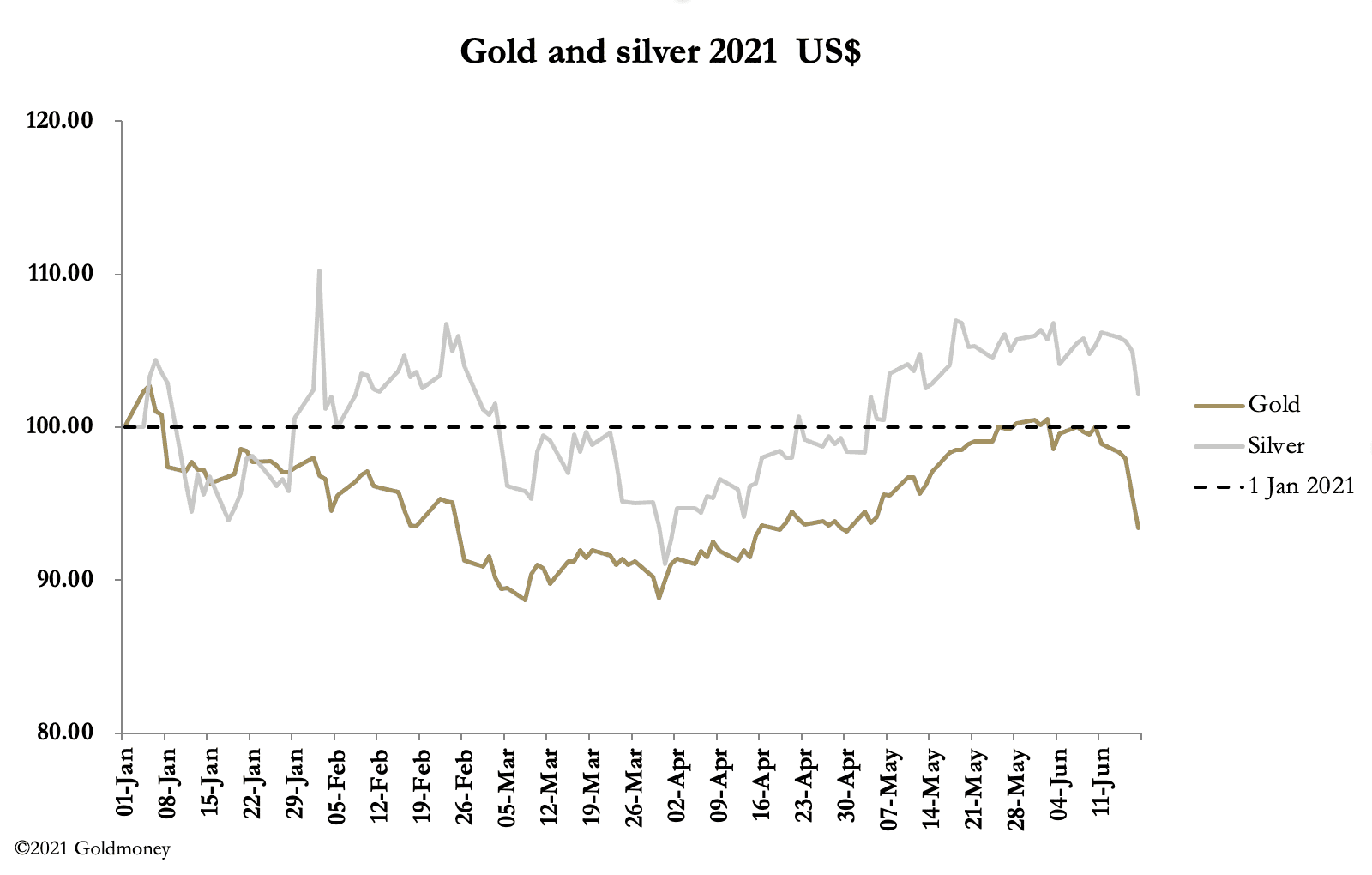 This week saw a massive sell-off, sparked by three factors: the approaching half-year end, the FOMC admitting that inflation may become a problem (but they still don’t think so), and the implementation of the Basel 3 net stable funding ratio. Consequently, from last Friday’s close gold in the UK’s time zone this morning was trading at $1792, down $85 from last Friday’s close, after a low of $1768 yesterday (Thursday). On the same time scales, silver fell $1.47 to $26.40, after a low of $25.78.

Perhaps the principal driver of the three mentioned above is the pressure on bullion bank trading desks from their bank treasurers to close down their positions because of the balance sheet penalties of running them under Basel 3, which for both the EU and US banks will apply from the end of this month. Our next chart shows the last known position, when on 8 June the Swaps (mostly bullion bank trading desks) were net short 179,750 contracts. We can assume that the many of them will be closed down in the coming months, because Basel 3 makes it uneconomic for banks to trade commodities, including gold and silver, compared with other lines of banking business. 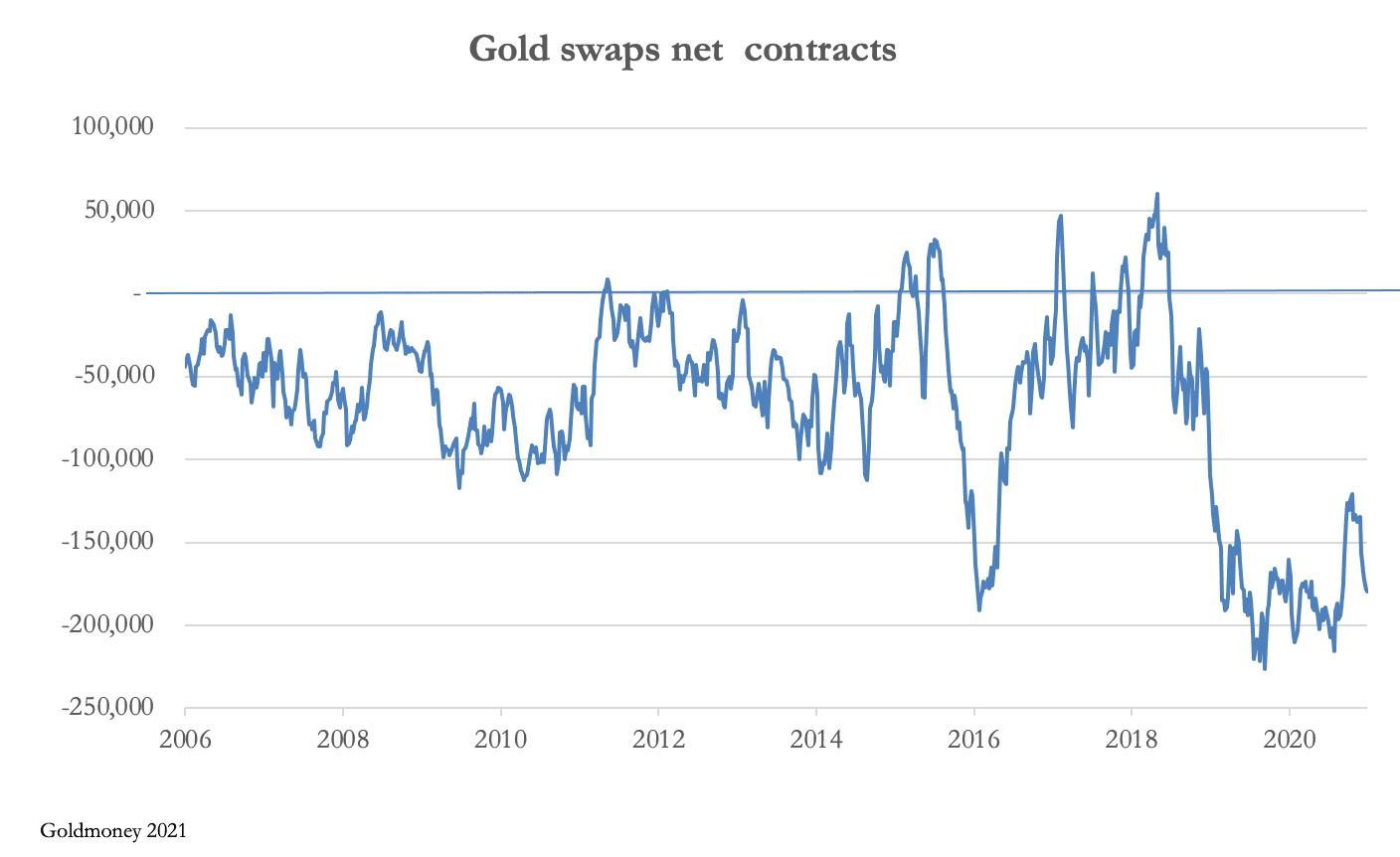 From last Friday, Comex open interest has declined about 11,000 contracts, so presumably the Swaps exposure has declined nearly as much, assuming little change in the net position of the Producers & Merchants category. But the fall in the gold price has reduced their net short exposure by $1.65bn —a significant improvement for them. And while shortages of coins and small bars are still reported in retail markets there does appear to be a slight easing of the overall supply situation in London.

While the immediate panic for the bullion banks appears to have subsided a little, the FOMC statement on Wednesday was welcomed by them. In fact, the statement only gave a small nod to the inflation danger. But it comes at a time when a combination of easing US Treasury bond yields, a small bounce in the dollar’s trade weighted index and the Fed withdrawing liquidity through increased levels of reverse repos appear to be shifting the balance of market sentiment away from inflation towards a risk of deflation.

This is just noise. The real problem for bullion markets is how unallocated paper gold and silver are to adjust for Basel 3 at a time of accelerating money printing. This would have been tricky enough if it had been implemented shortly after the net stable funding ratio regulations were finalised in 2014. But for it to coincide with a massive ramp in monetary inflation by the major central banks becomes doubly difficult.

Our next chart shows how the commodity complex has moved since March 2020 when the Fed’s current inflation policies were implemented. 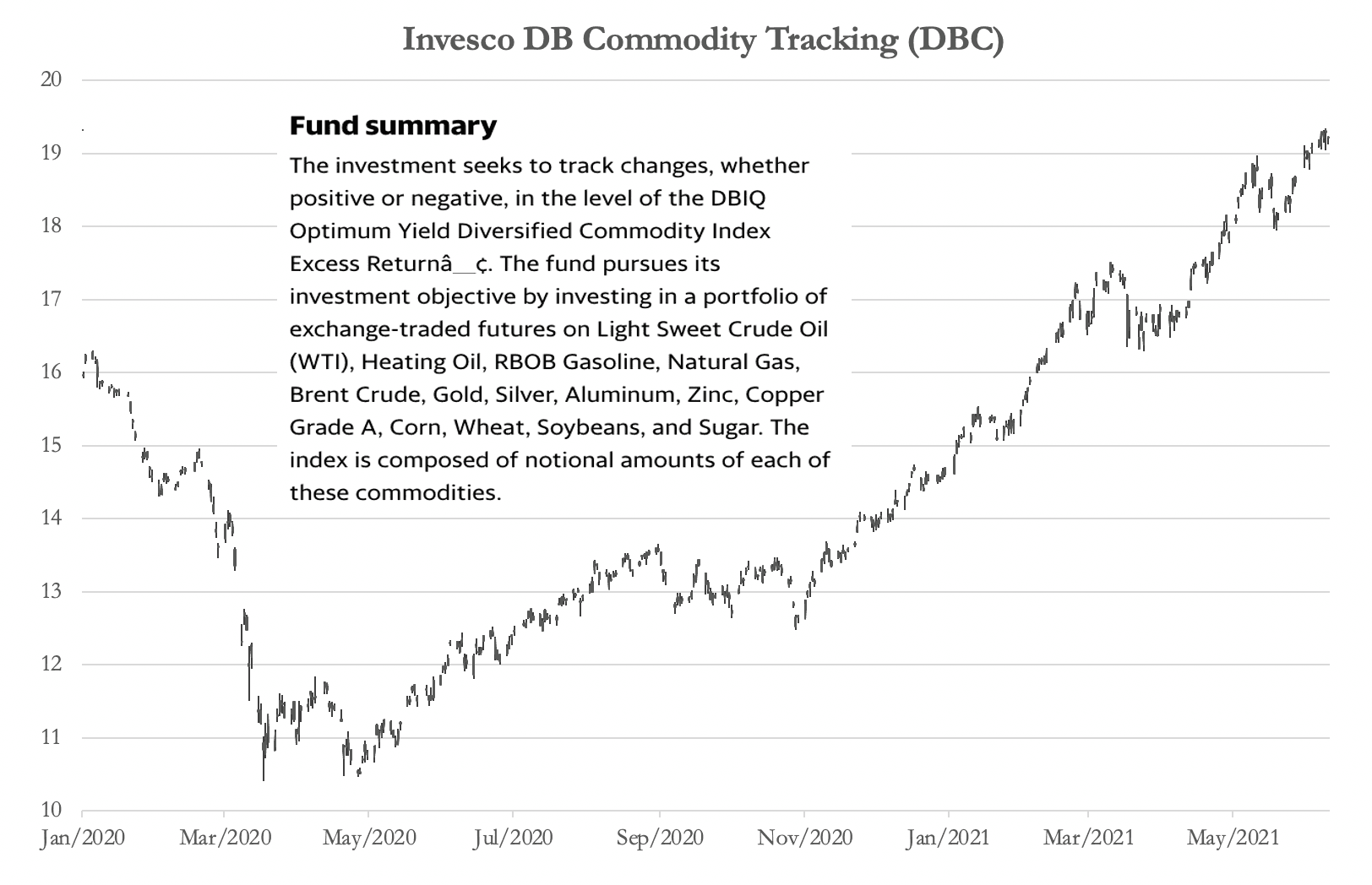 This basket of energy, commodities and raw materials has nearly doubled. Over the same timescale, gold has risen only 23%. This represents a significant level of mispricing, likely to be corrected in the coming months.