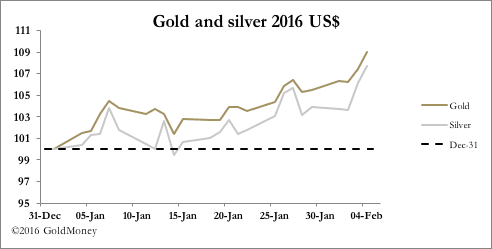 It was a better week for precious metals, with gold and silver hitting new highs for 2016.

Last night gold closed at $1155.5 and silver at $14.91, and in early London trade this morning prices opened at these closing levels. The performance for 2016 so far represents a rise of 9% for gold, and 7.75% for silver. Normally silver is roughly twice as volatile as gold, which suggests that it is relatively under-priced in current market conditions.

The bears in precious metals markets were caught off guard by the Bank of Japan's introduction of negative interest rates earlier this week. Talk of negative interest rates deepening further has naturally spread to other major bond markets as well, and investment banks are downgrading their forecasts for economic growth, particularly for the US. The effect has been to increase the number of government bonds around the world with negative redemption yields. Five-year maturity Japanese Government Bonds yield minus 0.11% and five-year German Government Bunds minus 0.31%. Negative bond yields for anything other than ultra-short maturities are unprecedented, and can only reflect an extreme fear of investing in anything else.

The downgrading of GDP growth prospects for the US has led to sudden dollar weakness against other major currencies in an early sign of a significant reversal of last year's dollar strength, which was at least partly due to the Fed's signals that higher rates were on their way. It would appear that the Fed has badly misjudged the economic outlook, and will have to change course on interest rates, damaging its credibility. Of course, weak dollar equals strong gold price.

Whether or not the US actually reverses interest rate policy to the extent that negative dollar interest rates will be contemplated remains to be seen. Any move in this direction will boost precious metals prices, since holding physical metal avoids what amounts to the most effective way taxing bank deposits. It will probably take a little time for this to catch on with the wider public, but talk of banning hoarding of cash as a means of avoiding negative rates is likely to accelerate a move into bullion and physical gold ETFs.

As if that is not enough, bank shares have fallen heavily, as fears of a systemic crisis surface, focusing on some of the Eurozone's banks. The shares of Deutsche Bank have been badly hit, as have the shares of major Italian banks. The weakness of bank shares everywhere does suggest systemic risk is becoming an important factor again for investors.

While the gold price has been firm in all trading sessions this week, it is clear from the timing of the price rallies that demand for paper gold in US trading hours is driving the price action. The combination of negative interest rates and increased systemic risk has led to bears buying back some of their shorts, and it is only in recent days that some bullishness has crept into the futures market. The chart below of Open Interest and the gold price illustrates this point clearly.

Until last week, a rising gold price was matched by falling Open Interest. This tells us that contracts were being closed as bears reduced their positions. That changed this week as the gold price rose further while OI began to pick up. The increase in OI indicates that speculators were beginning to open new long positions, in the wake of the gold-positive news on negative interest rates and Eurozone banking concerns.

For any bullish action to progress, genuine buying has to develop, and the events of this week, coupled with the action on Comex, are a fair indication that this is now happening.