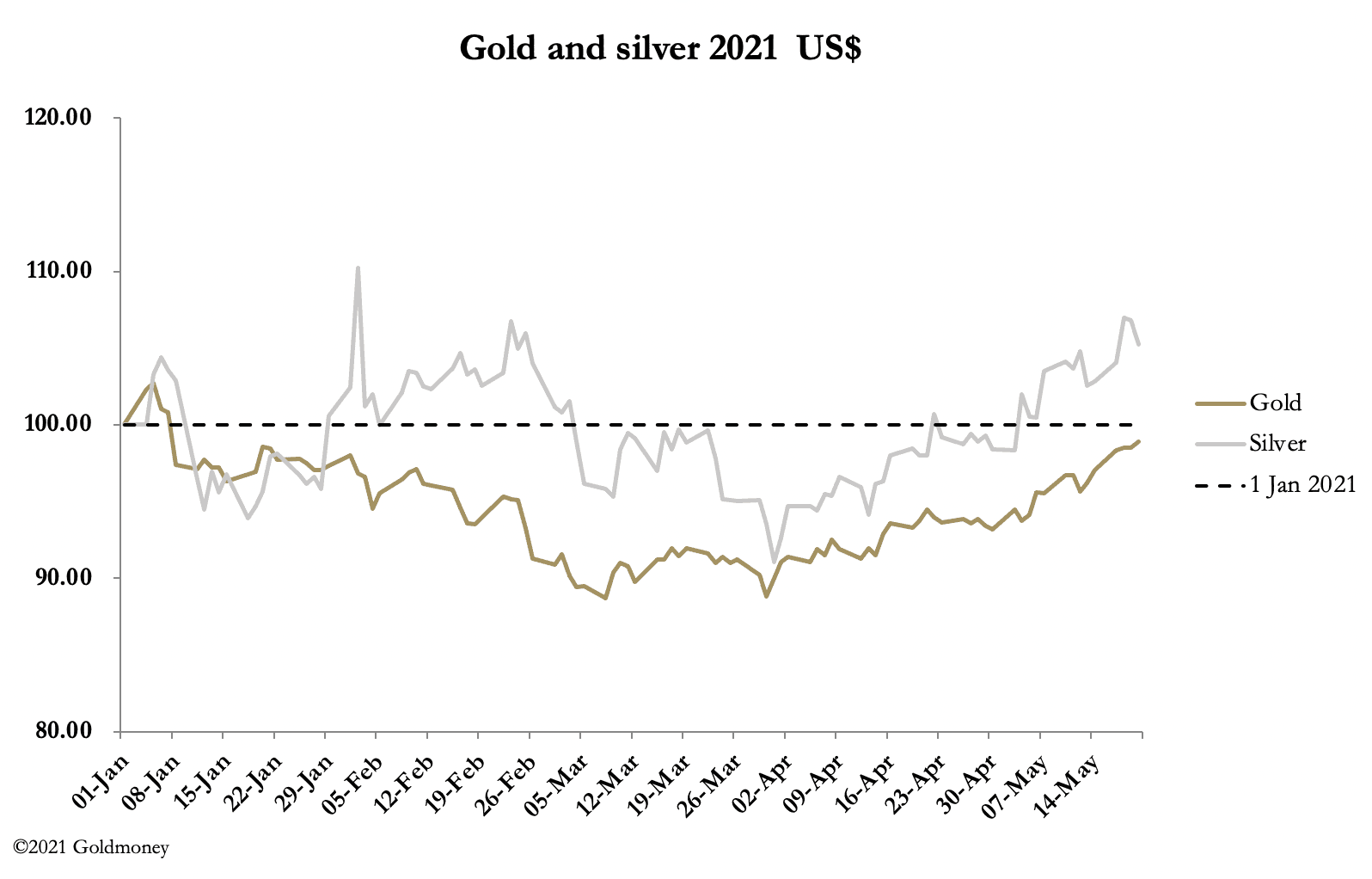 Gold and silver had a better week, with an exceptionally strong Monday. Gold continued with a daily incremental improvement, but silver fell back from an enthusiastic spike to $28.75 on Tuesday to drift lower subsequently. In European trade this morning, gold was at $1877, up $34 from last Friday’s close. Silver was trading at $27.75, up a net 72 cents on the same timescale.

Volume in Comex gold was the highest it has been in recent months, partly reflecting contract rollovers from the expiring active June month into August. Open interest has also risen significantly in recent weeks. This is our next chart. 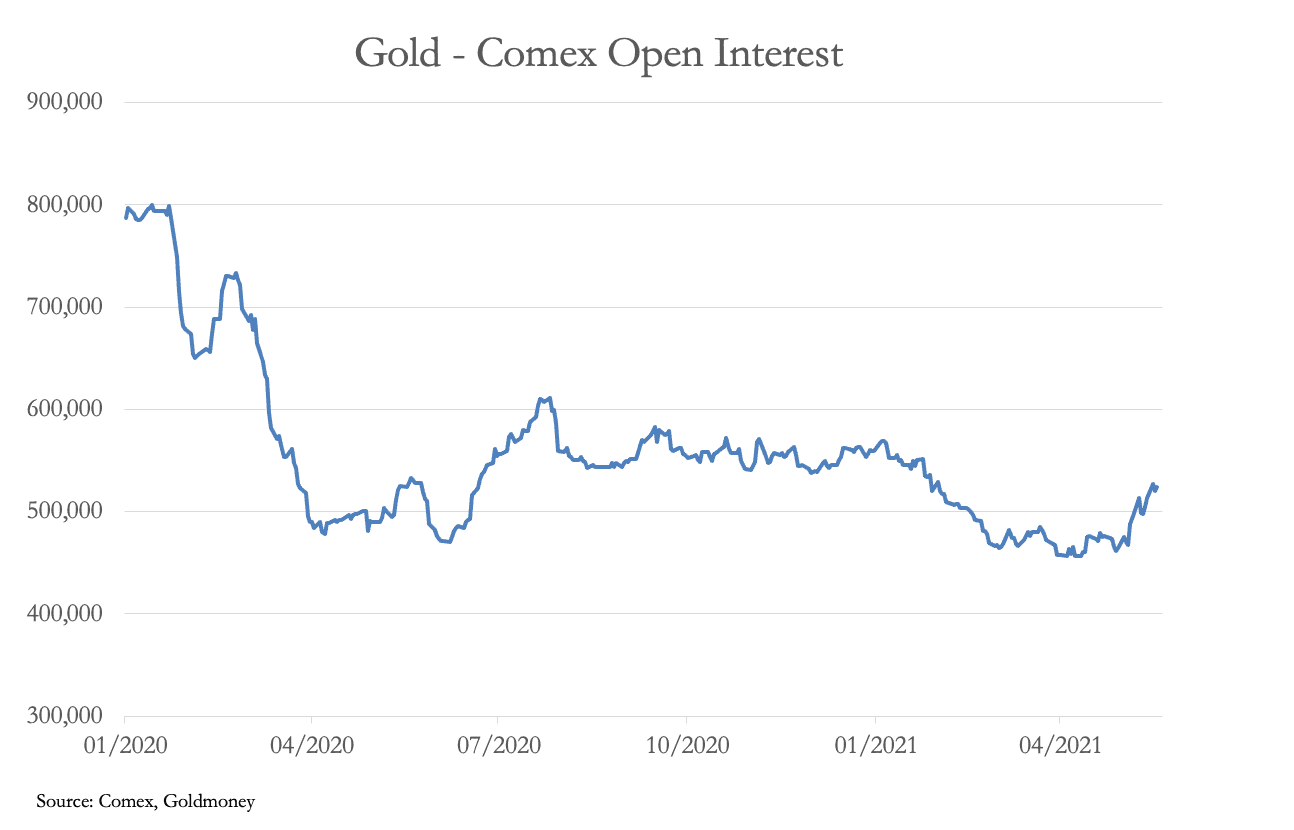 This is a reversal for the Swaps (bullion bank trading desks) in their campaign to close down their shorts, because in the absence of an increase in producer hedging the increase in open interest is entirely matched by an increase in the Swaps’ short position. In the light of the new Basel 3 regulations, traders’ bosses at their banks’ treasury departments will be instructing dealers avoid increasing their open positions, with a view to closing them down entirely in the next six months. This is because their London desks must stop taking positions ahead of the UK regulatory deadline of 1 January 2022, which applies to all LBMA members, who also make up the vast majority of the Swaps dealers on Comex. The same issue affects their silver positions, which is a far less liquid market with a potential price effect likely to be more dramatic.

While it cannot be conclusively ruled out, any hope that a way round the new net stable funding ratio regulations might be found is evaporating with the approaching deadline for European banks in under six weeks’ time. If the UK regulator refuses to follow the European Banking Authority in order to protect the LBMA a mighty row is bound to ensue. The assumption therefore must be that it will happen, and LBMA banking members will withdraw from the settlement system as well as from position-taking. And that closes down nearly all the Swaps on Comex as well.

The bullion market will have to adjust to the severe diminution of outstanding quantities of paper gold, transferring some paper demand to physical markets. The price effects will reflect a reversal of nearly four decades of price suppression for gold, silver and commodities generally through the expansion of artificial supply by banks to counter speculative buying.

In other news, the FOMC issued a statement which admitted that uncertainties about their outlook have increased, though they have not changed their expectations of overall inflation at 2%. This is despite massive rises in commodity prices, labour shortages and continuing logistic disruption. Following the FOMC statement, the dollar’s trade weighted index slipped towards new lows. This is our last chart. 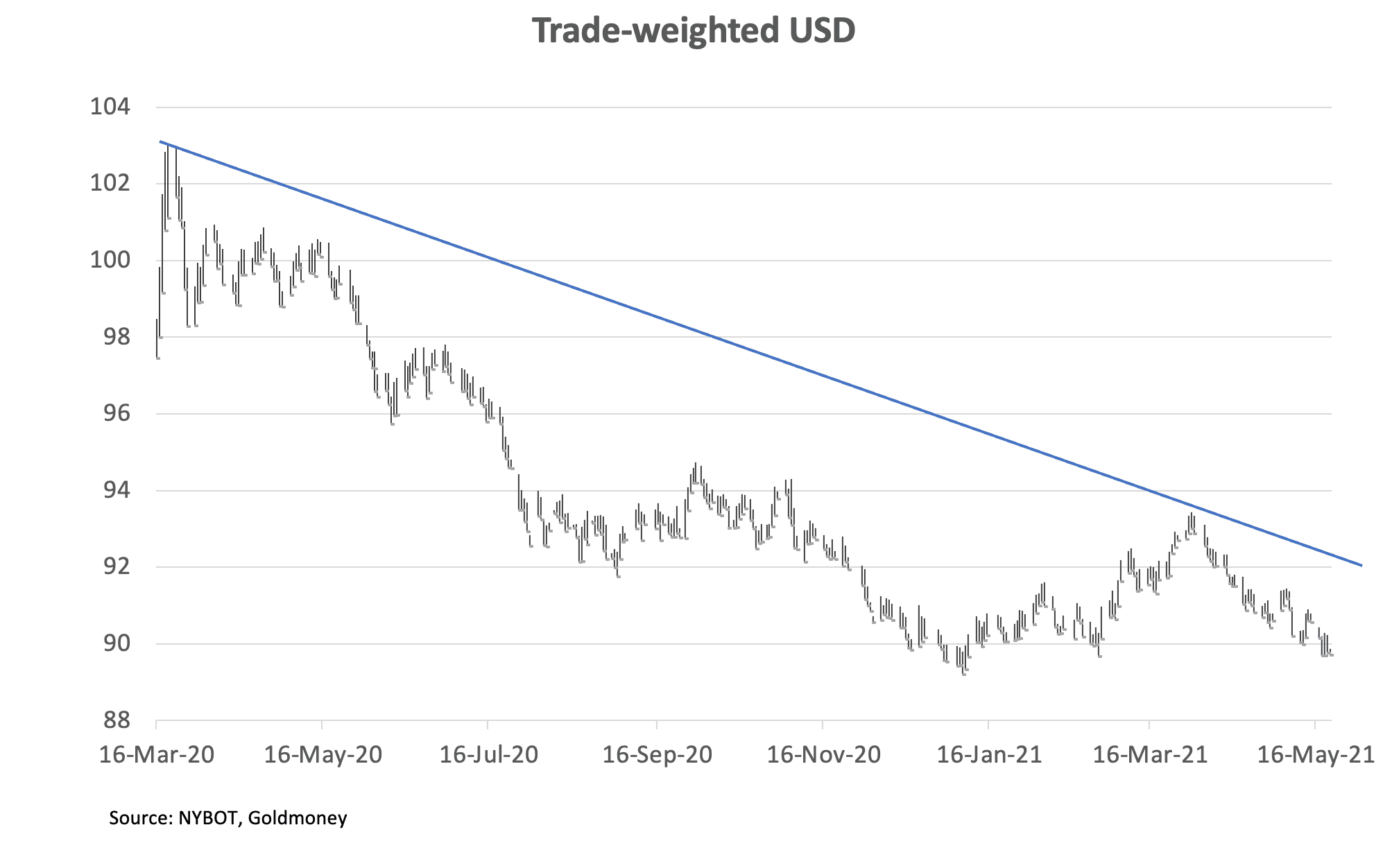 It is also worth noting that cryptos crumbled badly this week with bitcoin trading down to $30,000 from its April high of $65,000. It is currently trading at $40,300, but it looks as if that bull, along with ether’s, is broken. Furthermore, there are early signs that stock indices such as the S&P 500 are losing bullish momentum. As the old stockmarket adage went, sell in May and go away.