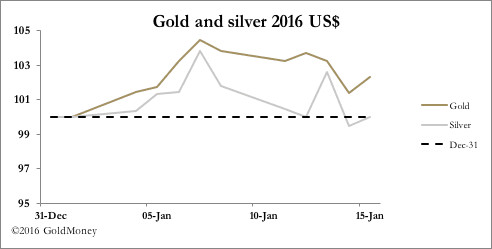 Our headline chart says it all.

The first two weeks of 2016 have been volatile for precious metals, with gold ending up 2.3% and silver exactly unchanged by this morning (Friday) European time. All markets have been volatile this week, with energy particularly so. West Texas Intermediate hit a low of just under $30, down 21% since January 1st. Measured against oil and other industrial commodities, precious metals have therefore held up reasonably well.

It has been a bad time for lesser currencies, notably the Canadian dollar, South African rand, the Turkish lira and Saudi riyal. These four currencies started with not much market kudos, the CAD and SAR were also badly hit by the falling oil price, and in all four cases there is a negative political dimension on top. Precious metals will have performed well in these currencies.

Bearish comment in financial circles is still dominated by worries over China, with analysts fixated on stock market traumas and a slowing economy. However, they were surprised on Wednesday by China's trade data, which showed exports increasing for the first time since last June. Separately, some evidence has emerged that many Chinese companies have already addressed their corporate debt problems, with the Institute of International Finance reporting a significant reduction in Chinese dollar-denominated debt. The implication is that bearishness over China, and therefore the whole commodity complex, may be overdone.

This comes at a time when Russia, doubtless fed up with the oil price being priced and controlled in US dollars, is introducing rouble pricing for its oil markets. In today's bearish environment this may seem unimportant, but when the oil price starts rising, as it surely will, the dollar's hegemony will be badly compromised.

We now turn to silver, which has been behaving unusually in recent weeks, as if the market is dominated by a single buyer at $13.80 and a single seller at $14.40. So what is going on? The chart below shows the gross short position in the money manager category (hedge funds) on Comex. 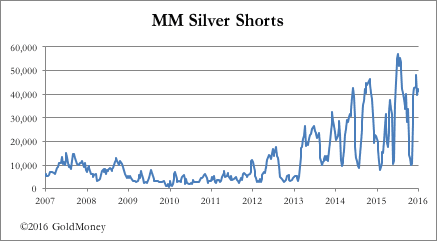 Besides these short positions being historically high, it is noticeable how the swings from a 10,000-contract base-line since the first half of 2013 have become progressively wilder. Thus, it appears that the hedge funds are placing increasingly large bets on the bear tack. It therefore appears that the futures market has become polarised towards this unstable activity.

Silver has been weaker than gold for some considerable time, mostly a function of relative volatility, which is reflected in the gold/silver ratio, shown in the next chart. 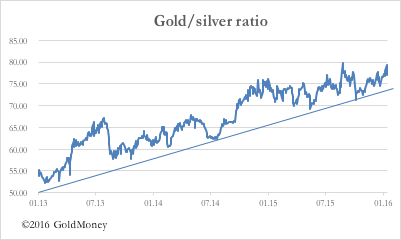 So long as the price downtrend for silver relative to gold remains intact, the gold/silver ratio uptrend will persist. However, the progressive increase in speculation by hedge funds suggests this game is long in the tooth and ripe for reversal. Watching the price action day to day tells us that there is a solid floor at about $13.80, underwritten doubtless by a major buyer.

When gold strengthens and the dollar weakens, which will only be a matter of time, the price action in silver could be sudden and explosive. With the ratio close to 80, it is worth bearing in mind that the old monetary relationship was approximately 16.

Physical gold deliveries through the Shanghai Gold Exchange into public hands last year totaled 2,596.37 tonnes, a 7.62% increase on 2014 and a new record.