Gold and silver had a bad week, with gold falling $25 to a low of $1262 by the Comex close yesterday, and silver by $0.50. This morning UK-time prices opened a little better on overnight physical demand, no doubt stimulated by those lower prices. The background to this poor performance was dollar strength relative to weak currencies, with the yen, euro and pound all declining sharply.

It feels like the market is drained of all positive sentiment, which is reflected in the very low level of open interest in the futures market. These conditions are more consistent with a market that is bottoming out than one that is about to fall sharply. Meanwhile retail demand seems to be stabilising, with growing interest for coins in the west, and weekly physical deliveries in Shanghai have quietly doubled over the last two months. Demand for physical gold has the stealthy effect of increasing the gearing of the shorts in the paper markets.

However, it looks like the short sellers have returned in some force, with good Comex volume last Tuesday and healthy turnover again yesterday (Thursday). Open interest in gold rose, which with a falling price confirms futures are being driven by an increase in short positions, most probably in the managed money category. This is shown in the chart below, and is particularly noticeable since 27th August, the start of the current decline. 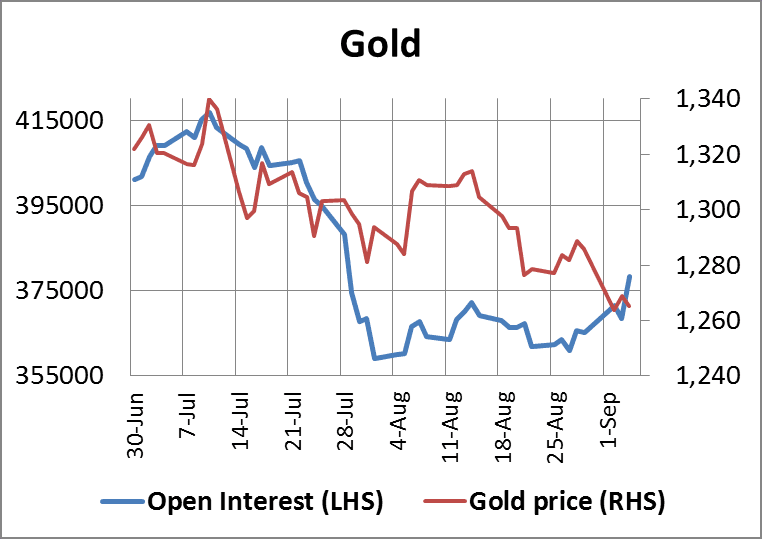 The silver chart shows the same symptoms of short-selling, after a heavy fall in open interest on 25-27 August, and a sharp jump yesterday of about 3,700 contracts. In silver's case there appears to be bedrock support at the $19 level. 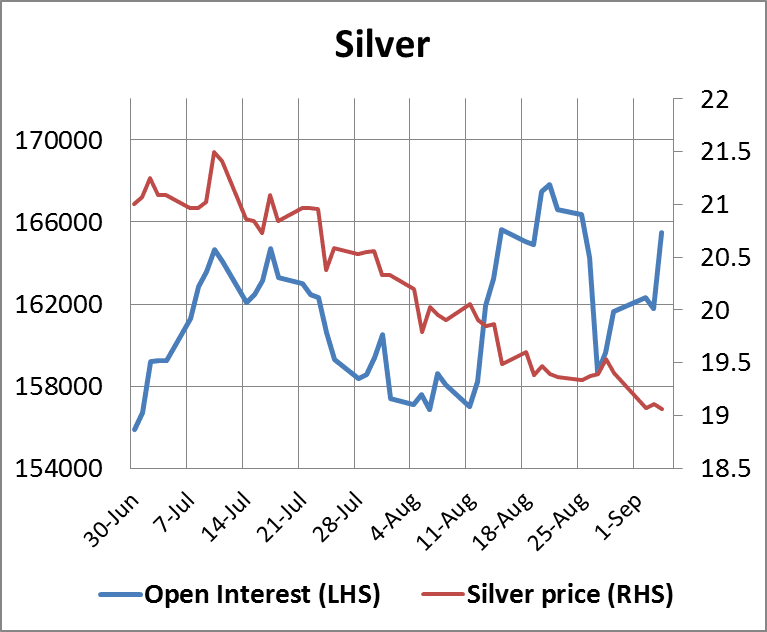 It is not sufficient to say that a strong dollar will automatically lead to a lasting fall in the gold price. The dollar's strength over the last few weeks has been mostly a reflection of weakness of other major currencies: the yen took an overdue tumble given Japan's deteriorating financial condition, the ECB cut interest rates from next-to-nothing to almost nothing, and sterling has been spooked by growing support for Scottish independence. None of this reflects a stagnant US economy, and there has been no change in the outlook for US interest rates to bolster the dollar.

A more valid driver of the gold price is changing perceptions of financial and systemic risk. It is clear from current equity and bond markets, which are rising on diminishing volatility, that they are now regarded to be low-risk markets. This situation can persist for a while, as anyone who has sold into a bubble too early will confirm; but the surer way to lose money on anything other than the short-term is by investing in over-priced bonds and equities instead of oversold gold, on the basis that perceptions of risk will normalise.