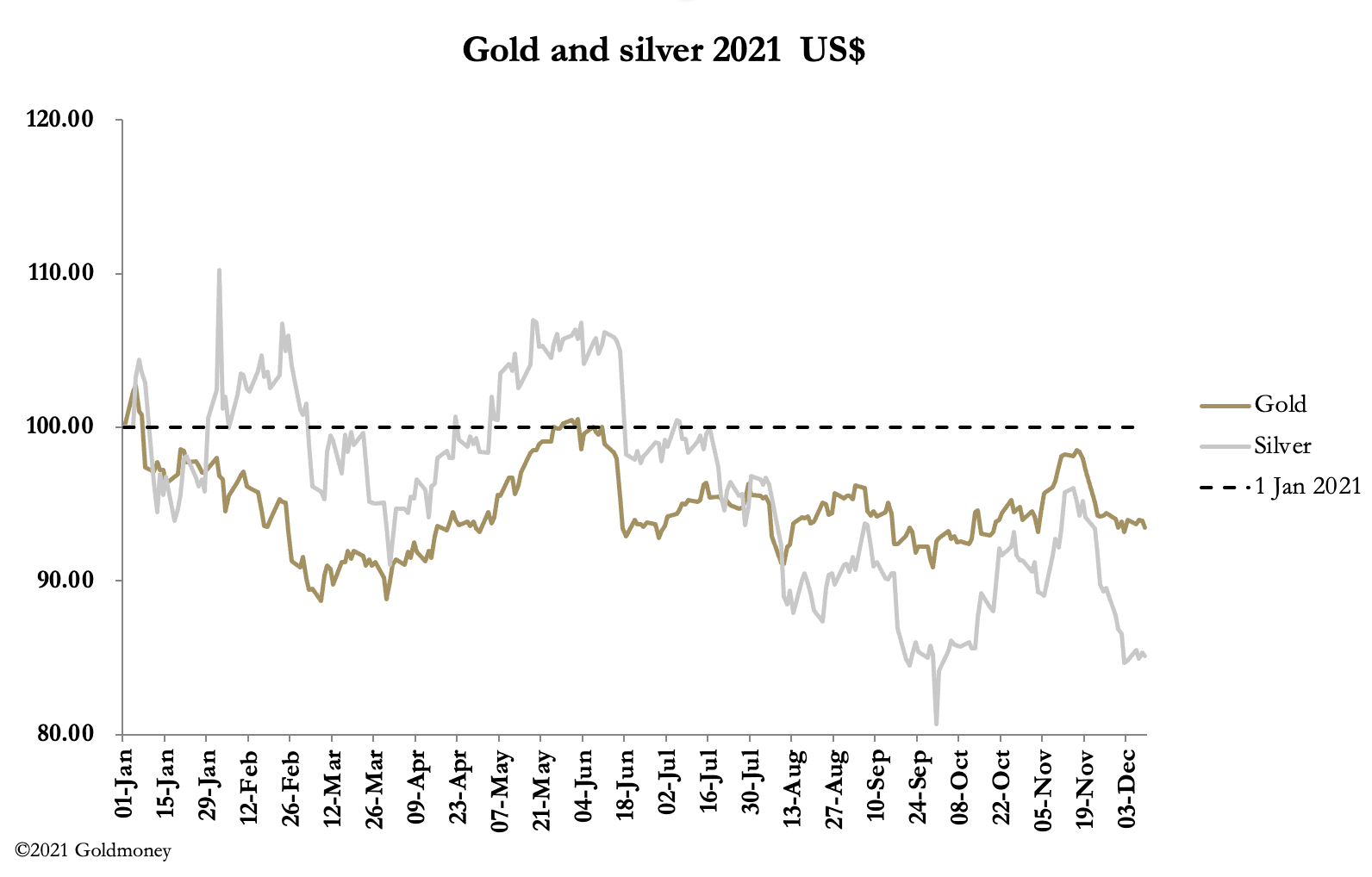 In last Friday’s market update I pointed out that the factors driving precious metal prices lower probably had further to run, with the bullion banks trying to manage the market ahead of the year end, when trading profits for the year are determined. A further sell off did transpire but following the release of the FOMC minutes on Wednesday gold and silver rallied off their lows.

This morning, gold was trading at $1808 in London up a net $25 from last Friday’s close, having traded as low as $1753 on Wednesday. Silver is up 45 cents at $22.60 over the same time frame, having dipped to $21.45. Volume in both Comex contracts slowed to a crawl ahead of the FOMC minutes, picking up noticeably yesterday.

The market effect ahead of this event was to discourage hedge funds from dealing. With these speculators effectively removed from the market, the Swaps (mostly bullion banks) were relatively free to mark prices down, taking out stops in the process. The only constraints were physical related, with bullion demand increasing at lower prices. Anecdotal evidence is that supplies from refiners are fully committed well into next year, in the case of silver up to mid-2022.

On Comex, we have seen traders standing for delivery with increasing consistency. Since 30 November warrants for delivery have been issued for 105.22 tonnes of gold, and 1,323.4 tonnes of silver, despite all the usual discouragements from Comex’s ringmasters to stand for delivery. It is mainly the Other Reported category who seek delivery. We know this because hedge funds employ virtually every other strategy except owning physical.

Turning to economic events, this week’s FOMC statement contained a grudging admission that consumer price inflation would be higher for longer than the FOMC had previously expected. But Jay Powell still insisted that it was due to bottlenecks in the supply chain, and he raised the FOMC’s forecast for inflation at the end of 2022 to 2.6%. Instead of raising interest rates from the zero bound he announced a more rapid tapering of QE to $30bn every month from mid-January. He expected the Fed funds rate to be raised to a median 0.9% by the end of next year.

On Thursday, the Bank of England announced a 0.15% increase in its base rate to 0.25%. And the ECB announced that it would reduce its asset purchase programme from €40bn monthly to €20bn from next October. Taken together, these announcements appear to be an agreed strategy between these major central banks not to raise interest rates if possible. It amounts to a policy focussing on currency stability in the foreign exchanges in place of meaningful action to stabilise the purchasing power of the currencies involved. In this we must assume that the BoE’s action is so minimal as to not matter.

It is important for markets to absorb this message. As they do so, we can expect gold and silver to reflect the continuing absence of time preference to support fiat currencies.