This week has been extremely volatile for oil, currencies and stock markets. Against this background gold and silver have drifted sideways to slightly lower, which given the dollar's strong performance is almost a positive result.

Along with a collapsing oil price on Monday and Tuesday, the Russian ruble fell from 58 to the USD on Monday to 77 the following day. It was clear that Russian oligarchs were getting out of rubles as fast as they could, hence the steep fall. By yesterday things had calmed down and the ruble was back to the 60.4 this morning. There was a slight frisson of excitement over the release of the FOMC minutes on Wednesday, to be followed by Quadruple Witching today. Stock index futures, stock index options, stock options and single stock options all expire on the third Friday of December. The result is the Dow 30 Index rose by 4.3% between Tuesday's opening and last night's close on an enormous bear squeeze.

Gold and silver couldn't escape all this volatility entirely. For example, on Tuesday when the ruble was collapsing then recovering, gold swung through a $32 range, though it ended up unchanged on the day. Silver, after recent strength, fell heavily between Monday afternoon and Tuesday afternoon UK-time, by $1.30, or 7.7%, underperforming gold for the rest of the week. Open interest on Comex for both metals remained stable after recent falls, as shown in the two charts below. 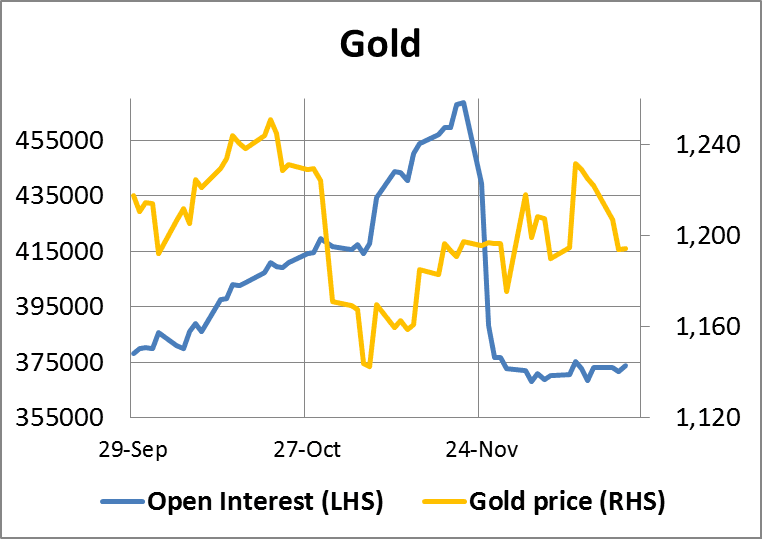 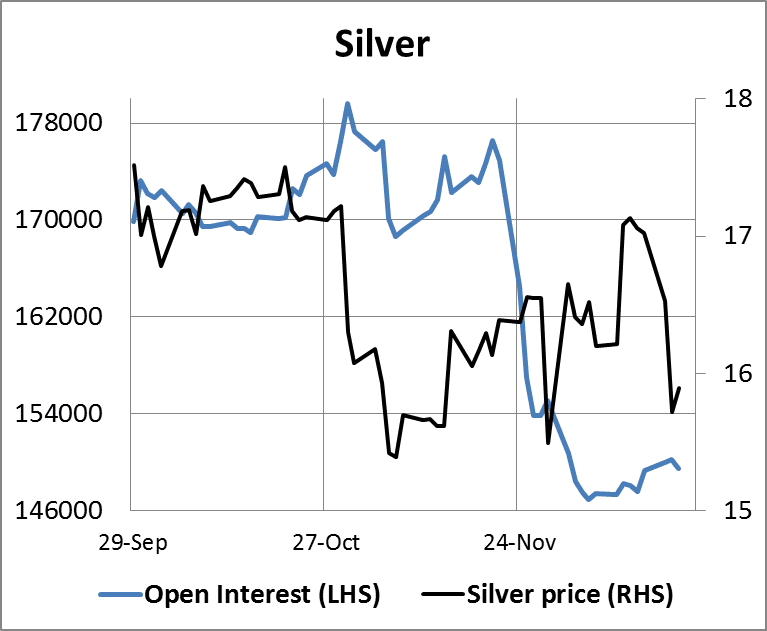 Short positions have now been reduced significantly, so the possibility of a bear squeeze has also lessened. However, one would not expect a bullish trend to develop from an extreme short position, only a technical bounce. So while there is not enough evidence to say the bear market is over, we can say the conditions for a new bull trend are at least falling into place.

Another good marker for a market that is on the turn is the quality of comment. On Wednesday rumours surfaced that Russia was selling its gold to defend the ruble, and this was even reported by Bloomberg and so repeated by serious analysts without checking the story. So far as I can establish it originated from a Russian news channel, Vesti Finance, which misinterpreted a fall in foreign reserves of $4.3bn as a fall in official gold holdings.

In other news, Johnson Matthey announced the sale of its gold and silver refining business to Asahi Holdings, a Japanese refiner of rare and precious metals. This deal makes sense to Asahi, given the rapid debasement of the yen and the likely demand for gold and silver from Japan in the future, as well as in Asahi's other Asian markets. In Switzerland, the Swiss Central Bank announced negative interest rates of 0.25% on deposits, making it attractive for Swiss investors to switch to gold.

Chinese wholesale demand delivered through the Shanghai Gold Exchange last week was 50.0275 tonnes, making it 1,955 so far this year, with over 2,000 tonnes for the second year in a row likely. Since then, London's gold forward rates have gone into backwardation signalling that global demand is outstripping supply again.

In conclusion, it has been an eventful week. The only caution worth mentioning is the month, quarter and year end is often the occasion banks will want to see lower bullion prices for valuation purposes, so we cannot rule out one last dip in precious metal prices over the next two weeks. Otherwise, desperate hopes the Russians are driven to sell tells us the remaining shorts are grasping at straws.