Gold and silver lost ground this week under the influence of options expiry on Comex. Gold fell $19 from last Friday’s close to trade at $1308 in early European trade this morning (Friday, 1 March) and silver lost 40 cents at $15.52. 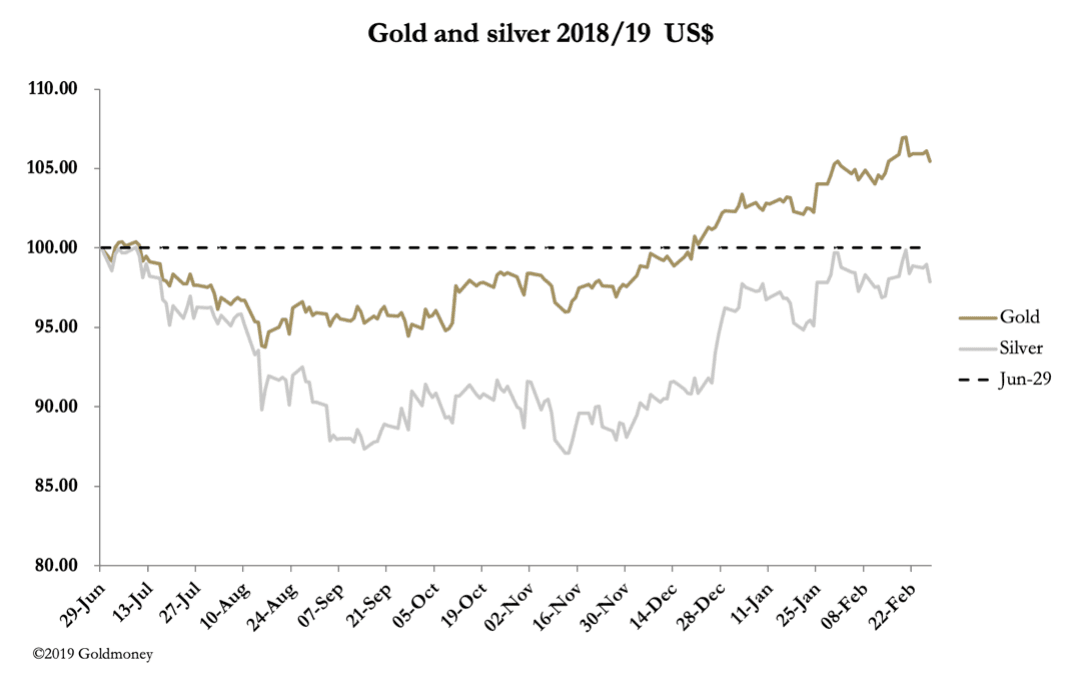 The most obvious driver of gold and silver prices this week was the expiry of Comex’s March option series. Market-makers, who are normally net sellers of options, have an interest in seeing prices low on expiry so that calls are abandoned. Therefore, you would expect prices to rise after expiry.

This may well happen next week, now this selling pressure is removed. However, volumes are generally quiet, so it is by no means certain futures buyers are there in sufficient numbers to drive prices higher. There is sure to be a suspicion that gold is likely to test the $1300 level again, so dealers might take a wait-and-see approach.

Furthermore, short-term traders will be looking at other factors, such as what the dollar is doing. And here, we see the trade-weighted index having drifted lower over the week, which is our next chart. 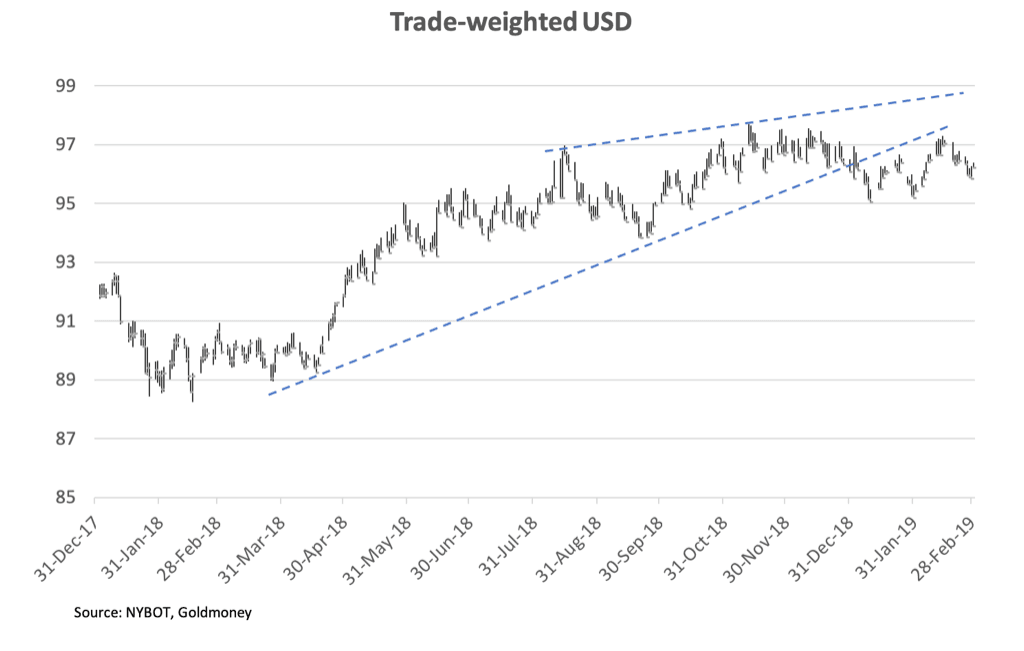 Having broken down from a weak topping-out pattern, the TWI rallied back to test the previous trendline (the lower pecked line), which it failed to overcome. It suggests further weakness, which if it breaks below 95 confirms a more significant retracement. This obviously has major implications for the gold price.

Conventional opinion still emphases the safe-haven benefits of the dollar, now in the context of a weakening global economy. This argument is not borne out by the facts. US Treasury TIC data for December released recently show the largest net outflow of dollars for a very long time, at -$91.4bn. Clearly, foreigners disagree with the investment consensus.

Preliminary figures for foreign portfolio holdings of US securities at 30 June 2018 were released yesterday, and they indicate an increase of one trillion dollars to $19.434 trillion. This is an all-time record at a time of contracting global trade. It would be a huge surprise if foreigners didn’t reduce their dollar exposure, because it is an imbalance whose size is no longer justified on grounds of trade.

It is likely to be several months before the hit to global trade is clarified, and therefore to the dollar itself. The TWI chart above suggests that negative capital flows that will lead to further dollar weakness are becoming a factor.

This being the case, the current consolidation in gold at the $1300 level is likely to be a short-term affair before gold moves up to test the established highs of the last few years at $1350-60.

Central banks are still buying physical, and it is worth noting that Romania is in the process of recalling some 60 tonnes of gold stored at the Bank of England. This may have been prompted by the BoE’s refusal to repatriate Venezuela’s gold, but we should also note that central European nations are generally revising their gold policies in the light of Russia’s aggressive addition to her reserves.