In their best week for a long time, gold and silver continued their upward move against all currencies. Against the dollar, gold rose $62 on the week to trade at $1502 in early European trade, and silver by 80 cents to $17.00. 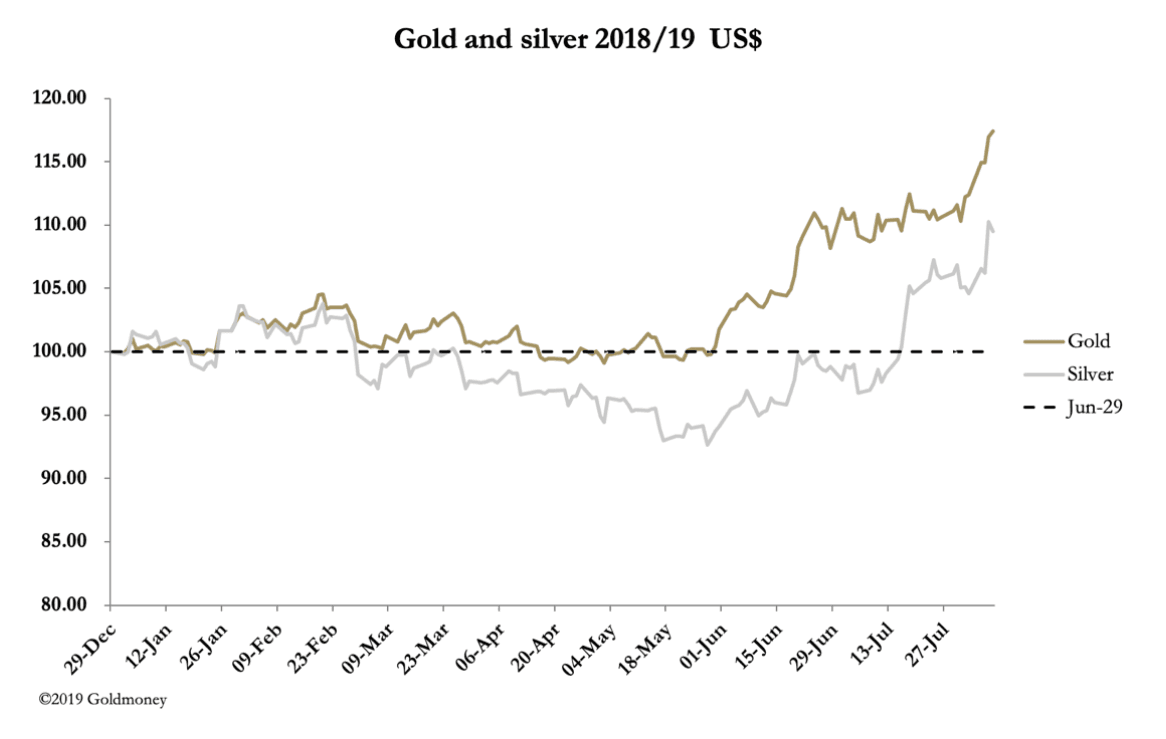 It is hardly surprising that gold, which saw its intraday peak at $1510.43 on Wednesday, is pausing for breath at a nice round number. But so far, every dip below $1500 has seen renewed buying. While technically overbought and vulnerable to profit-taking, it indicates that perennially underweight money-managers are rethinking allocations, rather than outright speculators getting too greedy. If this is true, it explains the unstoppable technical momentum underlying the price action.

Our next chart illustrates this technical position. 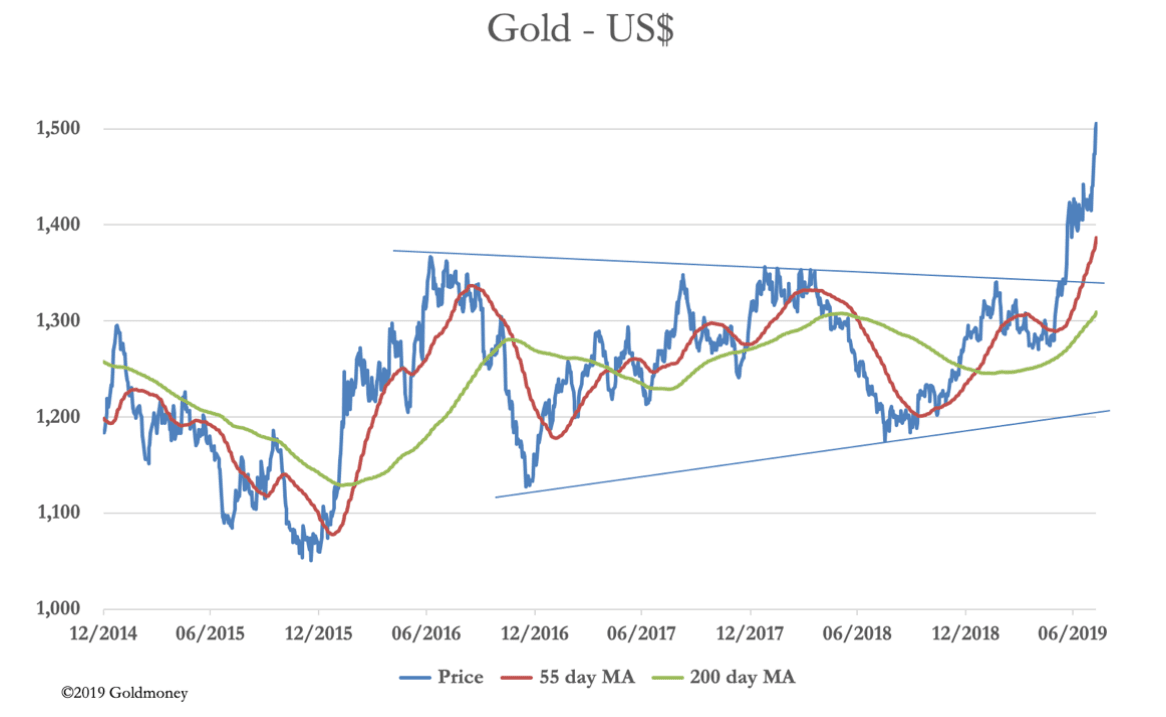 Moon-shot! Having spent three years in a massive consolidation and fuelled by a capitulation sell-off last September, the price has much catching up to do. The momentum behind it, if this was a stock, would appear to be unsustainable. But this is gold, money, not a conventional investment, despite what most Westerners think.

Gold appears to have risen, but much of the price change should be attributed to falling currencies. Looked at in that light, conventional technical analysis, which assumes all price subjectivity is in the investment and the currency is a constant, has its limitations. Clearly, shifting fundamentals between gold and the fiat currency complex are at the root of the former’s price changes.

This suggests that the moment all gold bugs have been praying for has finally arrived. In this case, the gold/$ ratio appears to be reflecting prospective monetary inflation, given increasing evidence that the global economy is in trouble, the receding prospects of a US/China trade agreement, and the certainty that central banks will begin to expand their money supplies in response. It is becoming clear that the likelihood of negative interest rates spreading and becoming deeper is also increasing.

The realisation the fiat-money system is broken must be the principal reason gold has risen. And it is not just the dollar as reserve currency, as our next chart of the four major currencies, rebased to the end of gold’s post-2011 bear market illustrates. 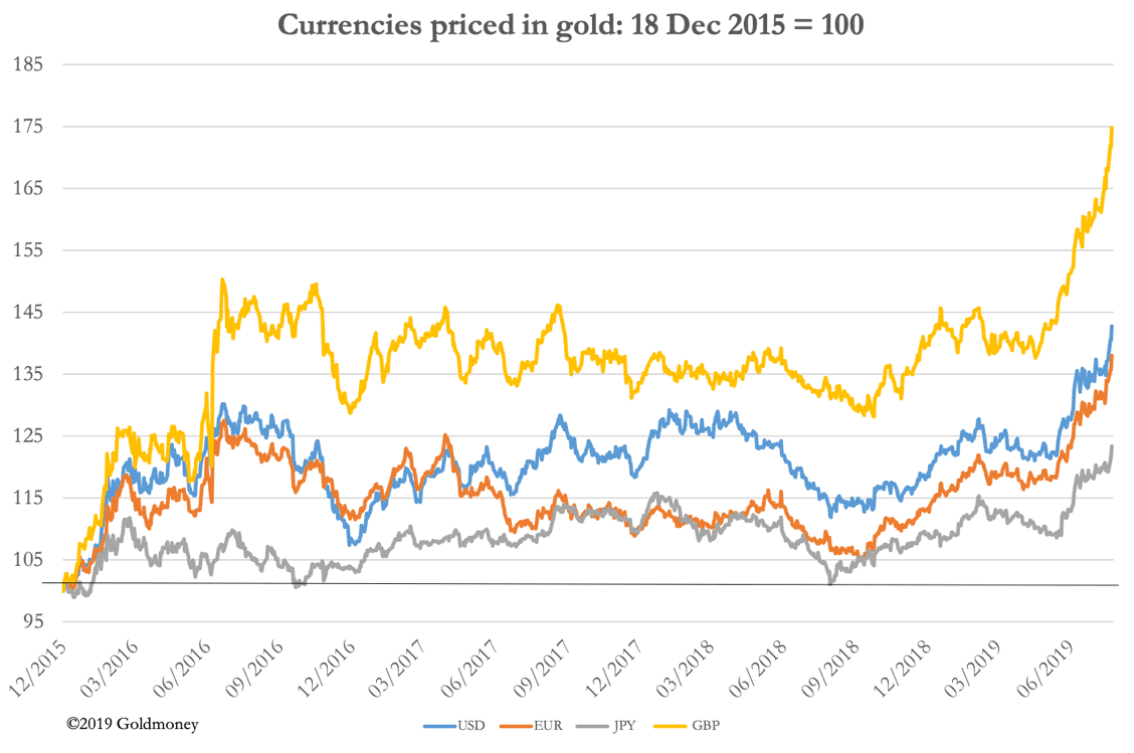 If gold prices continue to rise, there must be a danger that in capital markets, which have very little physical gold supporting a mountain of paper derivatives, one or more bullion banks could be in financial difficulties. On previous experience systemic issues in such a sensitive market are resolved by bullion banks clubbing together to smash the price. There is every indication that a sale of, say, 10,000 or 20,000 Comex contracts would only temporarily halt the price move, because this is a currency issue, not a gold issue.

Meanwhile, silver is playing catch-up, with the gold/silver ratio still at a very high 88 times. With the gold price being driven by falling fiat currencies, the ratio should fall substantially.