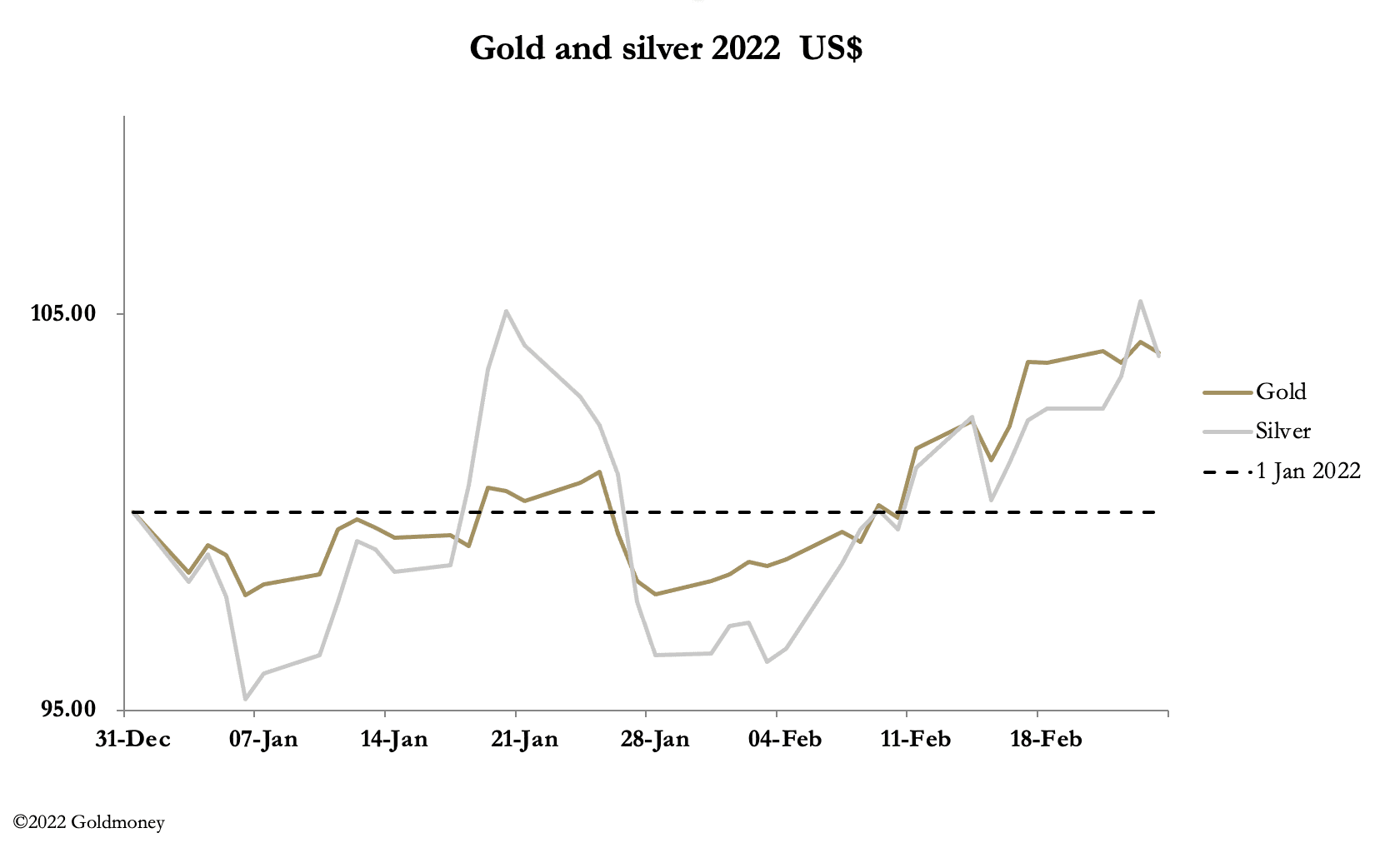 This was the week that Russia attacked Ukraine, taking out its military capability. Europe awoke on Thursday morning to this news, and gold and silver spiked higher before falling back into net losses for the day, up $11 on the week, and silver at $24.20, up 30 cents. Our next chart shows the half-hourly detail for gold’s moves over the week. 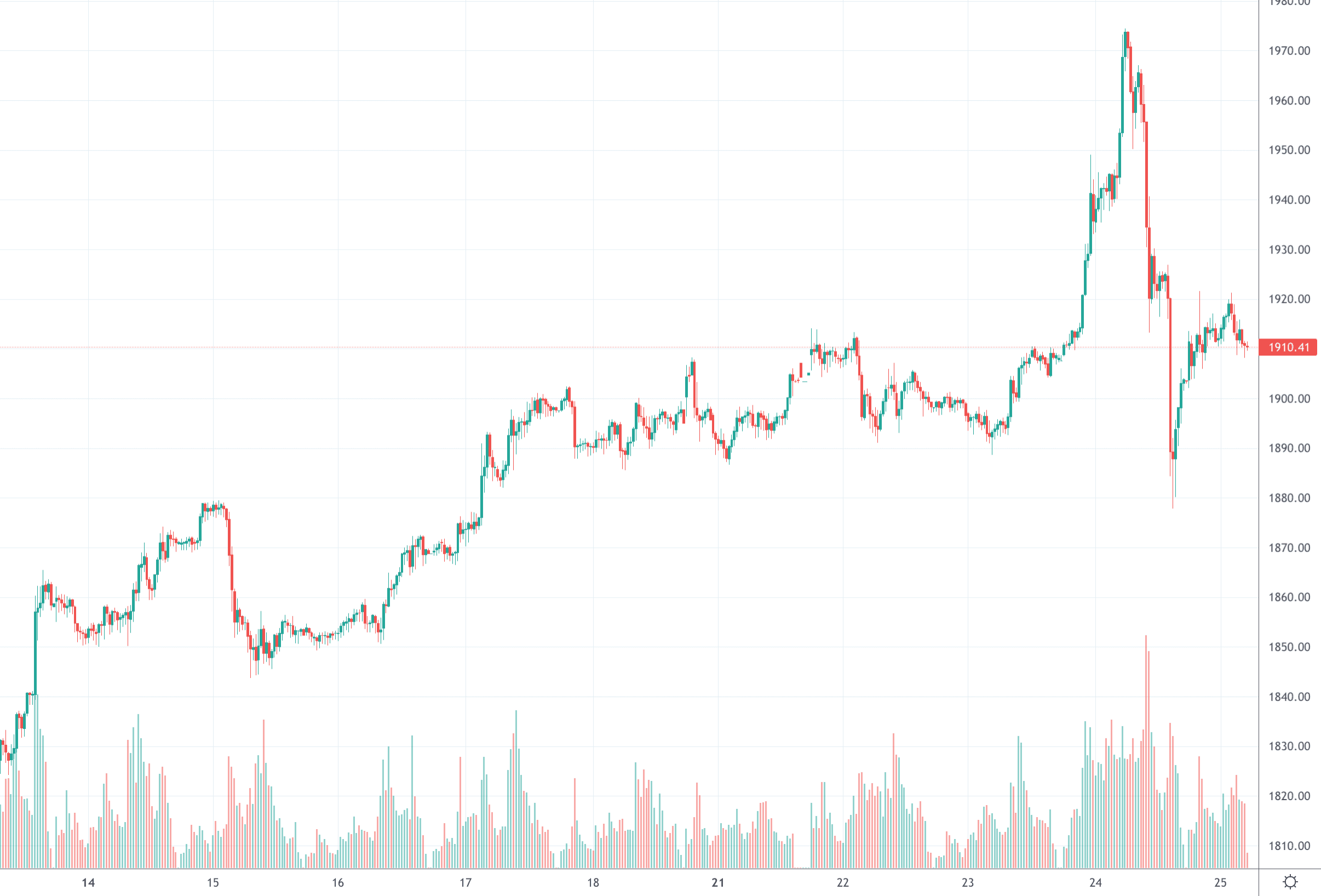 Gold had been gradually rising until Wednesday night before moving sharply higher in Thursday’s morning trade in Europe, touching $1974. After US trade on Comex commenced, there was no follow through and profit taking took over, driving the gold price down for a net loss of $5 at the close. Comex volume was high, but not unduly so.

Analysing this action, it is worth bearing in mind that Open Interest on Comex had already risen to 618,186 contracts, indicating a very overbought market. Our next chart puts this in an historical context. 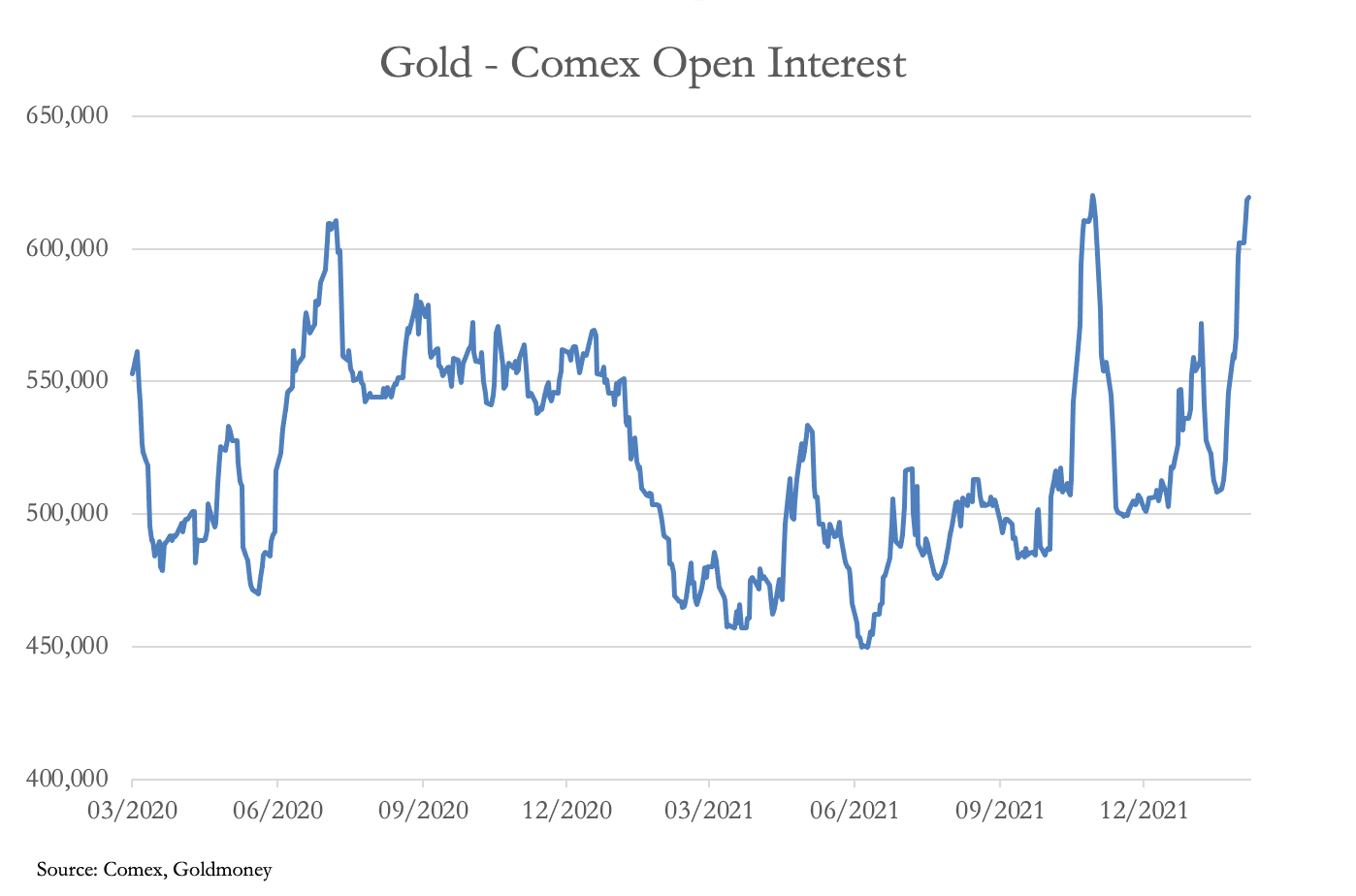 Open Interest of over 600,000 contracts is rarely seen. All it needs is a buyers’ pause for profit-taking to begin and stops to be triggered leading to a cascade of falling prices. Open Interest has yet to decline, which suggests that any let up in the Ukrainian headlines will lead to more unwinding of long positions, encouraged, as always, by the bullion banks who represent most of the net shorts.

These are speculators’ games being played in derivative markets, and we can assume that similar drivers are in the unreported but far larger London forward market. However, physical deliveries on Comex have resumed after a pause — in the last five trading sessions 143,800 oz of gold and 3.87 million oz of silver. New supply is still being hampered by covid in some mines, and the supply chain issues which have affected other commodities are also restricting refinery output at times of growing physical demand.

We must also consider whether gold is the risk-off trade during a war. It is true that those likely to be directly affected will flee from currency alternatives. But for global markets, what matters far more is how a war changes the prospects for currencies beyond the region most affected. If the credibility and purchasing powers of global currencies are likely to be undermined, then gold and silver prices can be expected to rise.

Russia has made it clear that attempts by America and other NATO members to impose sanctions will be met with restricted energy supplies from Russia. The following tweet from Russia’s President Medvedev makes Russia’s position clear.

€2 for 1 cubic meter of natural gas is more than double current prices. Yet the West’s immediate response has been to implement plans that would make it hard for Russia to supply energy and oil into the West and be paid. It is becoming clear that we are watching a financial war likely to drive energy and commodity prices far higher. In which case, when the current overbought conditions are resolved gold and silver prices will rise significantly.