Gold and silver had a torrid week, with gold falling $31 from last Friday’s close to $1249 in early European trade this morning. Silver was worse, down 66 cents to $15.78 over the same time scale. 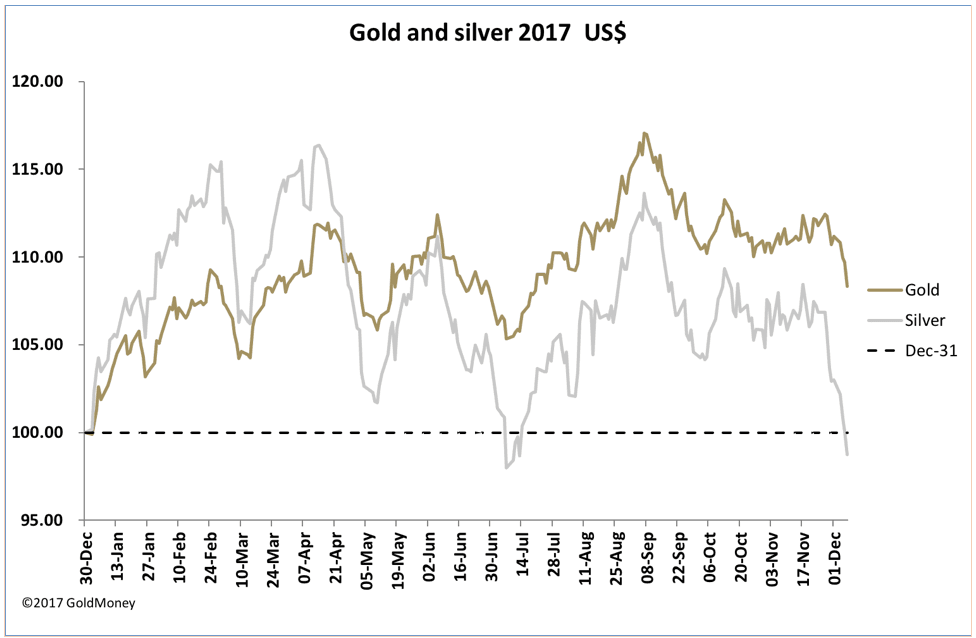 For weeks I have been warning that the bullion banks would want to get gold and silver prices as low as possible ahead of the year end, shaking out the speculative longs to square their books. As they used to say, don’t fight City Hall, or in this case, don’t fight the US financial establishment.

Silver is now down on the year (on a closing basis), but remarkably, open interest on Comex has held up well. This is our next chart. 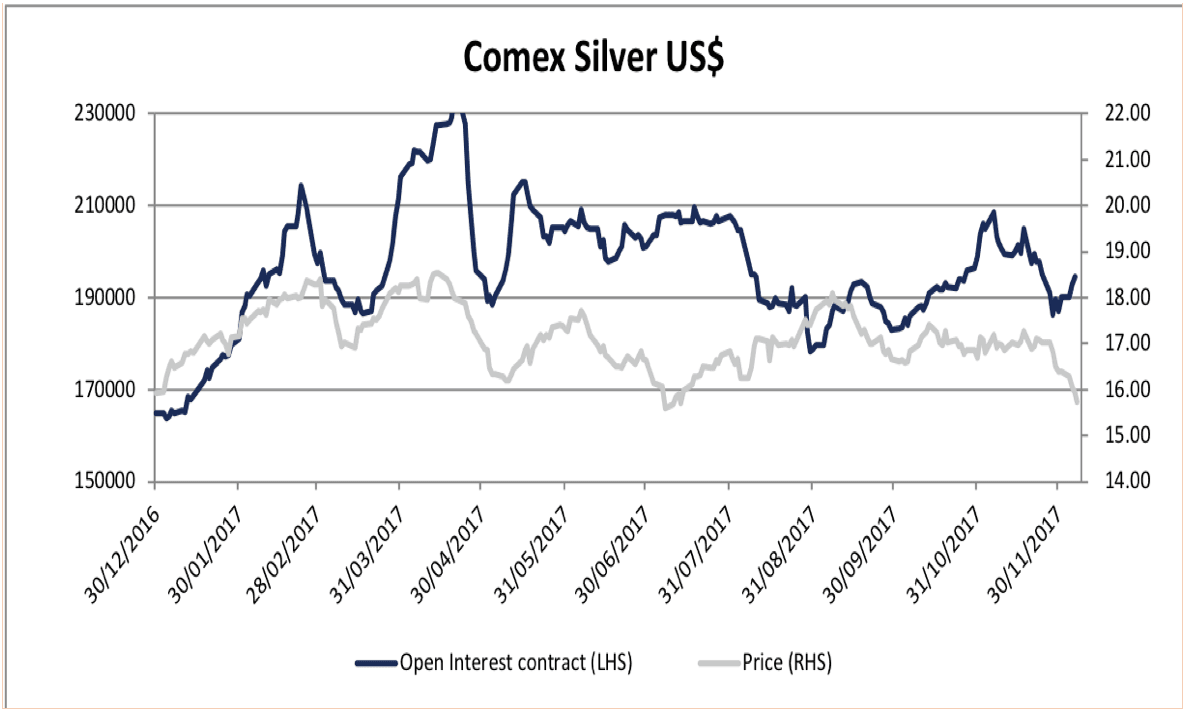 This suggests there’s a high proportion of genuine hedging, as opposed to purespeculation, making it difficult for the bullion banks who are short to close their positions. In other words, a high proportion of longs are industrial users of silver, seeking to lock in current prices.

This is not the case in gold. Here, open interest has at last fallen significantly from earlier levels. This is our next chart, which has a longer time base than that for silver, for year-end contexts.

The last two months of 2015 and 2016 saw similar falls in open interest and price declines. At the same time, there were very similar technical and fundamental conditions. Mid-December saw a rise in the Fed funds rate, another one is expected this December. The breakdown in the price made the charts look awful. Same this time, as can be seen in our next chart. 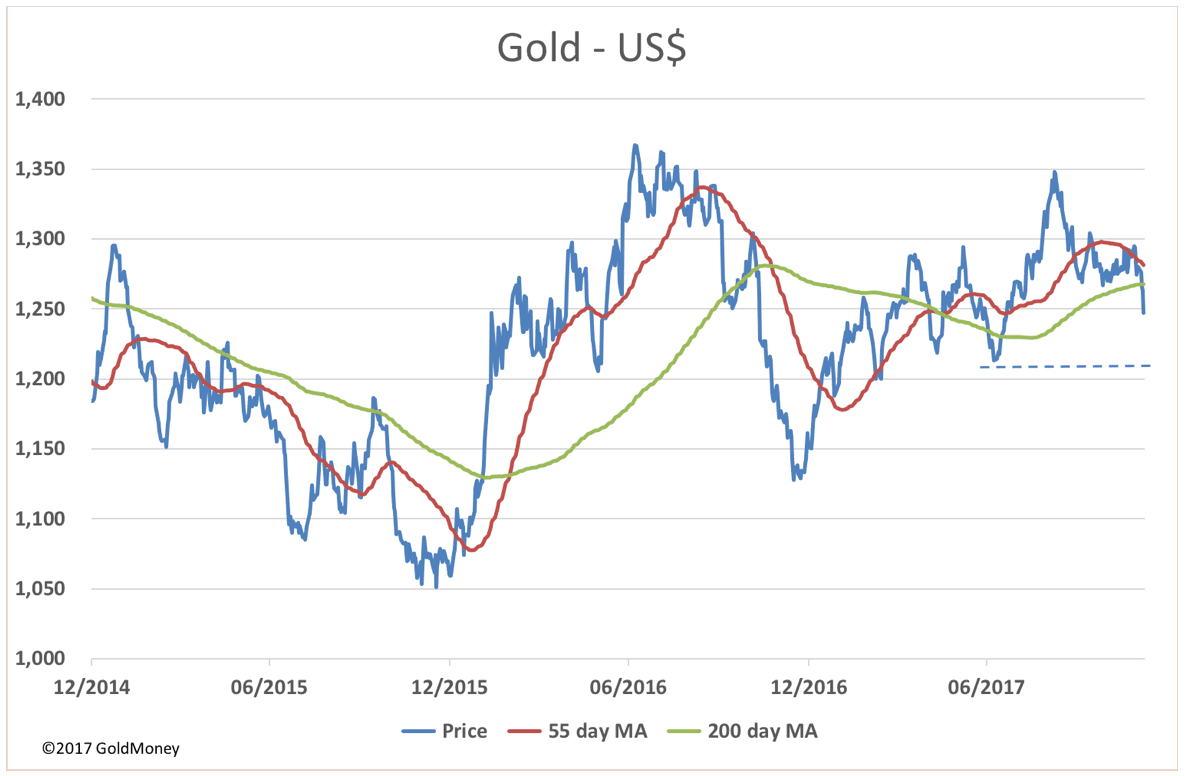 The chart has turned distinctly bearish, with an initial price target at $1210. It is, above all, an indication of how low sentiment has become, rather than a sensible basis for a price forecast.

Games are still being played with exchanges for physical. In the past, these deals, which were genuine as implied in the title, were very rare. Now, it appears to be a mechanism whereby the bullion banks buy off attempts at forcing delivery by moving them off Comex into the London forward market on a preferential basis, for the party attempting to take delivery. In effect, these are off-market agreements to settle an on-market obligation.

On any other market, this would be ruled as shocking behaviour and market abuse, and participants penalised. But not on Comex.

It’s not just gold and silver affected by year-end considerations. The word has been put out that China’s economy is slowing, and this is some commodity prices are weak, and heading lower. There is some surplus copper in the market, but not much else, and the Chinese economy appears to be on course.

Speculative attention has diverted from gold to cryptocurrencies, with bitcoin enjoying a spectacular run. It started the week at $9,950, and at one point yesterday hit $19,600. This morning, it is trading at $16,300, but who knows where it will end this evening. Regulated bitcoin futures are due to be launched on Comex next week, and already the banks are complaining they won’t make any money out of it. Will Comex backtrack? After all, it appears to be a casino for the banks, and if the house doesn’t win it doesn’t play.