This week has been very uncomfortable for long-term gold investors. Trading in derivative markets has become thin, as evidenced by sustained intraday periods of little price movement, with a tendency to drift lower.

This relative calm was shattered on Thursday ahead of the release of the Fed's FOMC minutes when a sale of only 1500 futures contracts (4.67 tonnes) was sufficient to eliminate all bids in the market. The subsequent fall drove the gold price below the October lows, as shown in the chart below.

The consensus in the investment community is uniformly bearish. Closer questioning boils it down to everyone agreeing for the same reason: the trend is down, the charts are terrible, and therefore one has to be a bear. This level of consensus, long on herd instinct and devoid of any solid reasoning, is however typical of extremes of market sentiment.

The event of the week for which the bears were praying was the release of the FOMC minutes. They actually said nothing new, beyond reaffirming both the desire to reduce asset purchases as and when circumstances permit, and the contradictory commitment to current ultra-low interest rates.

Of greater relevance perhaps is the threat to "twist" that tapering implies: in other words yields on bonds might be free to rise relative to close-to-zero overnight rates. And if bond yields rise, that is bad for gold, or so the bears argue.

This simple logic is blind to two overriding facts: adjusted for the increase in fiat currency, gold is now at a discount of 34% to where it was pre-Lehman crisis, and things have if anything become far worse since then (see the chart below). Furthermore, we must be rapidly approaching the point where there is very little gold left in the West to supply the voracious Asian appetite. So both valuation and physical demand are totally ignored. 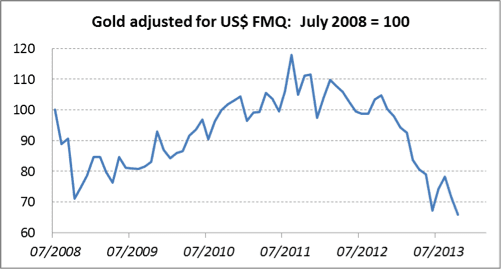 There are many similarities between today's market sentiment and that of September 1999, when the gold price jumped 27% in just two weeks. The bullion banks were bearish with gold at $255. The consensus then was that it was going to go lower perhaps to $220, stock markets were hitting new highs with the dot-com boom, and price inflation was not a problem.

The bear squeeze in September 1999 would have been more dramatic had the Bank of England and the Fed not used their still considerable bullion stocks to intervene and rescue the bullion banks from their short positions. If a similar bear squeeze develops today, it is unlikely the Western central banks will have enough gold available to control the market.

The following list is of expected statistics for next week.