Sep 6, 2019·Alasdair Macleod
Gold and silver had a remarkably strong performance before a sharp mark-down yesterday, which continued into early morning trade in Europe. Gold was down a net $14 on the week at $1505, and silver down 26 cents at $18.14. Wednesday saw highs of $1557 and $19.65 respectively. 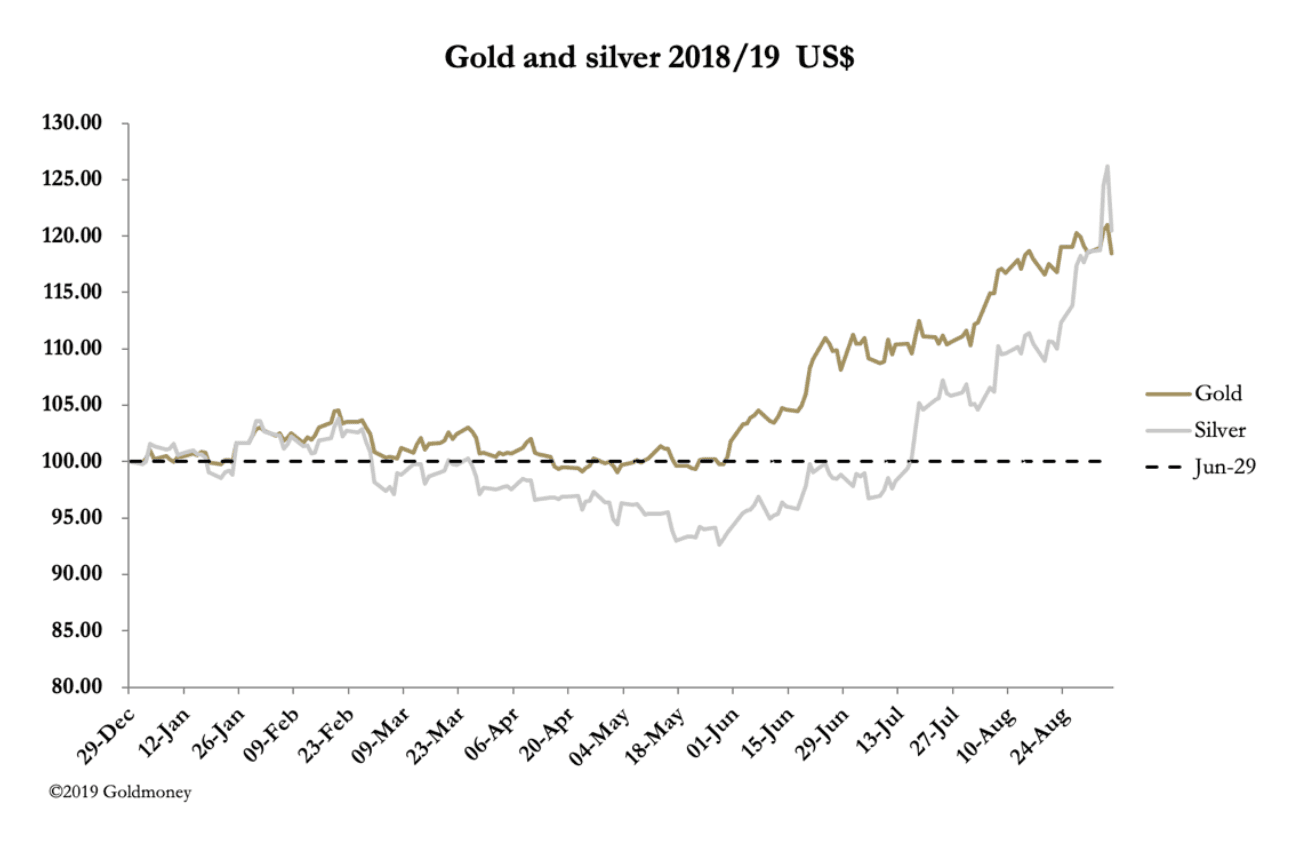 The reasons cited for yesterday’s reversal were a report that Sino-American trade talks would resume, the Fed would only cut the Fed Funds Rate by 0.25% (not 0.5% - but a cut this size was not expected anyway), and some upbeat employment figures. But the fact of the matter is gold and silver had become very overbought and vulnerable to profit-taking.

Before yesterday’s take-down, silver at last outperformed gold taking the start of the year as a base. This is evident in our headline chart, and it takes the gold/silver ratio back to 83. This is our second chart. 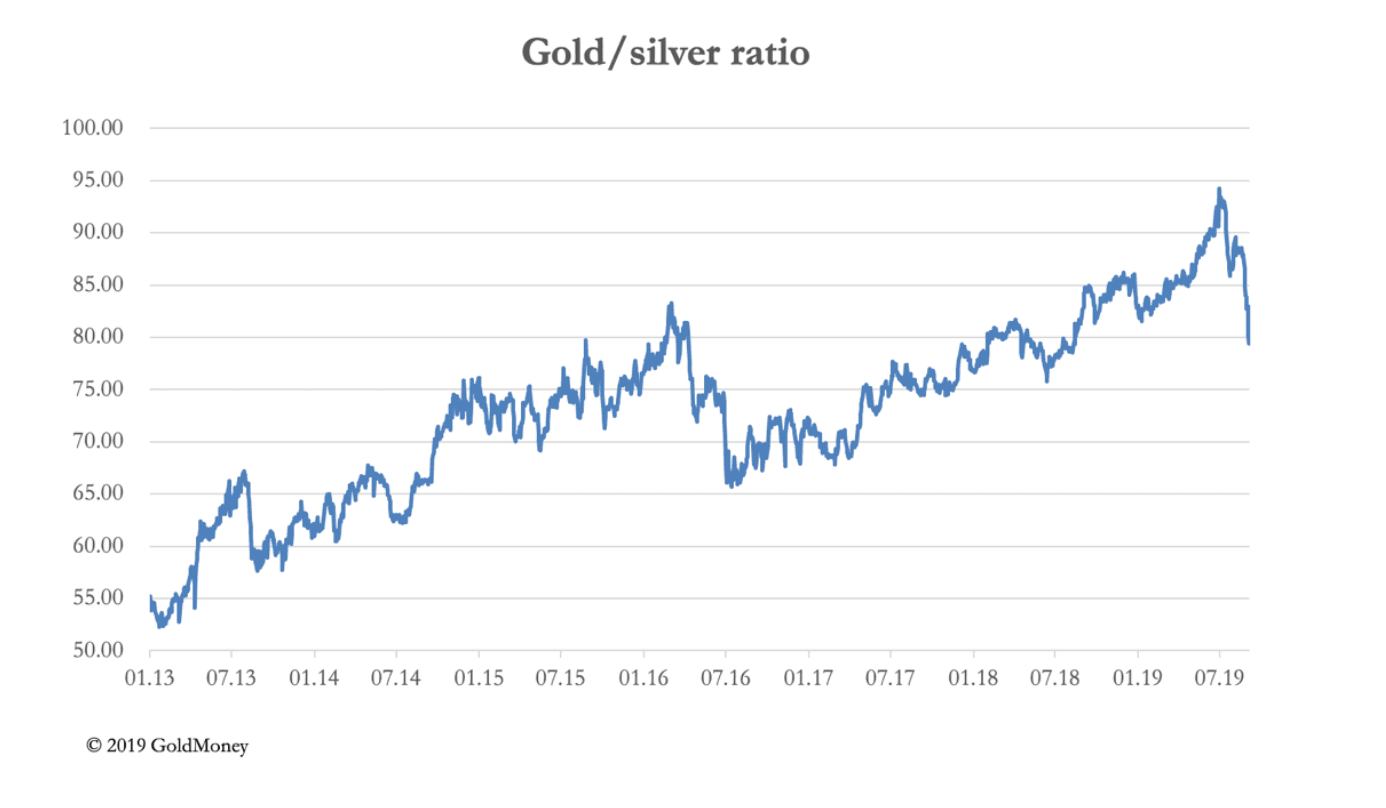 In recent weeks, a long silver short gold straddle has been extremely profitable. The point of this chart is only to give the recent fall in the ratio some perspective. For those who are bullish of gold, there is ample room for further downside in this ratio.

Next up is gold’s technical chart, which illustrates the extraordinary momentum under the gold price. 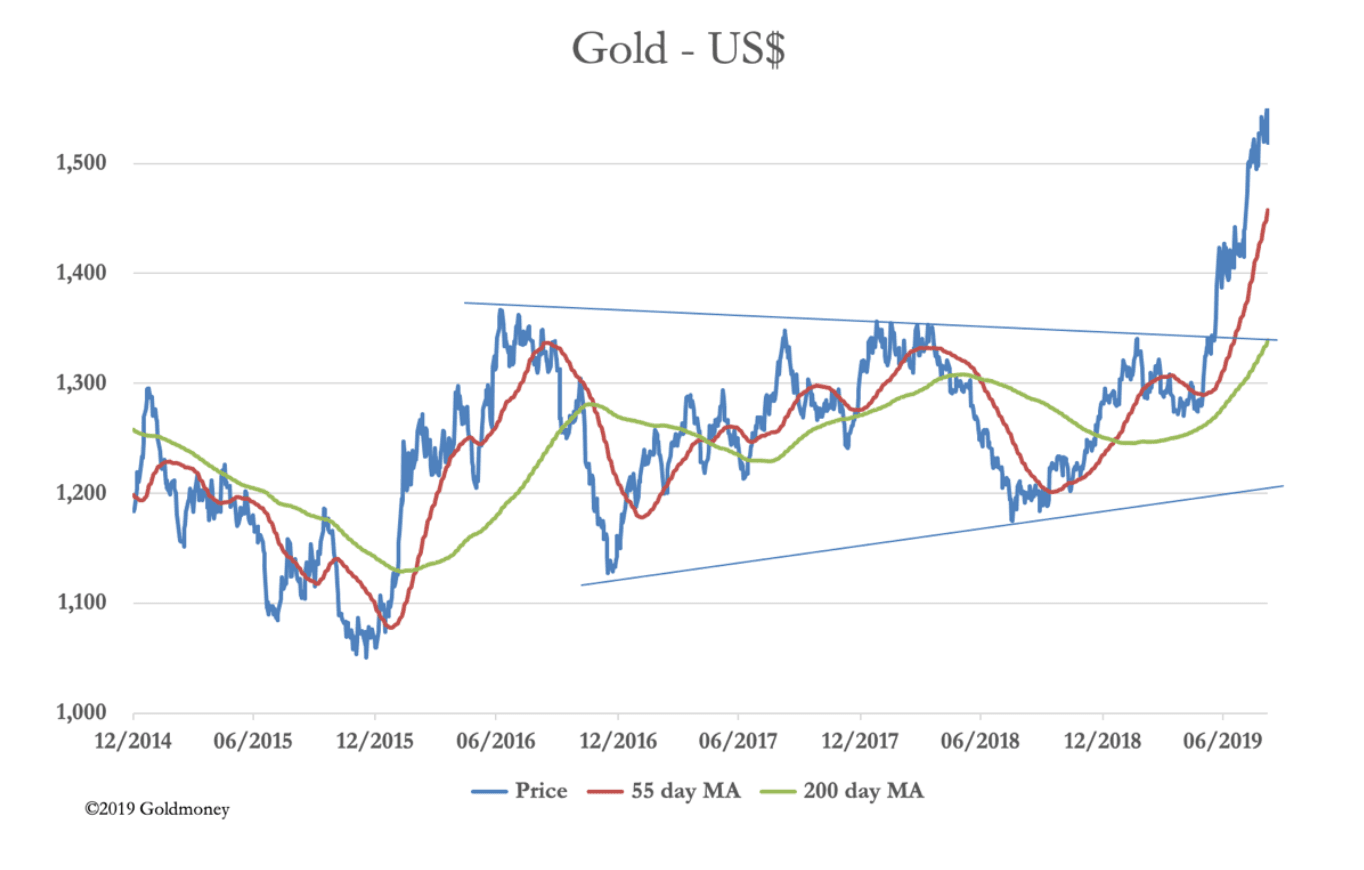 Unless gold dips below the $1490-1500 band, even the current correction looks like a running correction, skewed to the upside.

While one can understand that bullion banks, being record short, will be praying for a loss of bullish momentum so that they can take out the speculators’ stops, the outlook for interest rates has fundamentally altered the game against them. This is why, of the reasons that triggered this bout of profit-taking, the most important was the indication of a cut restricted to 0.25% in the Fed Funds Rate. Our next chart is of the swap dealers’ net position on Comex (i.e. the bullion banks operating on Comex and in London forwards). 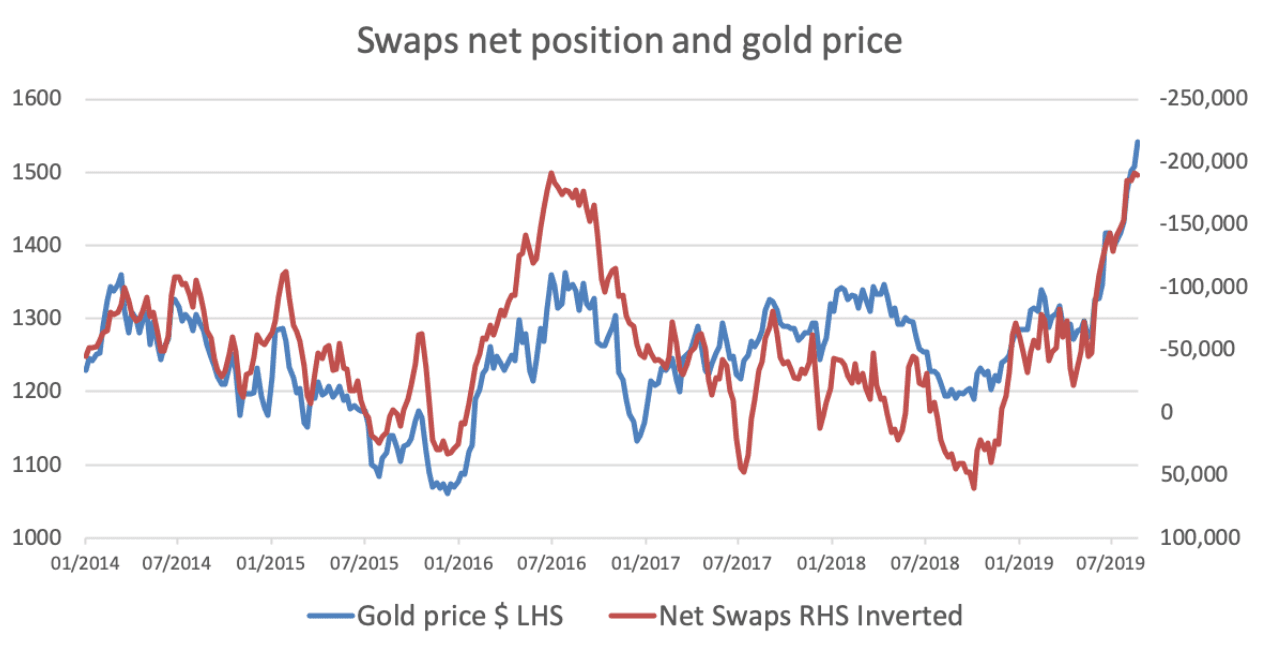 This was as of 27 August when gold closed at $1540, showing a net short position of 189,472 contracts. There is no knowing their positions in London or the extent to which they have protected themselves in option markets. But there must be no doubt bullion banks are systemically short overall, and this run in the gold price is likely to be hurting them.

Whether they can engineer a further fall in the gold price next week remains to be seen. But gold now needs to regain $1540+ for an immediate challenge on the $1600 level. If it happens, we can expect some bullion banks to be in trouble, which could spark state-sponsored intervention. Alternatively, a longer consolidation, with gold drifting back towards $1450 becomes a reasonable bet, given the vested interests.

These are purely technical considerations, having little to do with the realities of the physical market. The extent to which Chinese and Indian buyers have been priced out of the market has been compensated for by physical ETF demand, which takes total holdings to nearly record levels. According to figures compiled by the World Gold Council, in August they increased by 122.3 tonnes, taking net demand over the last three months to 587 tonnes, an annualised rate of 2,348 tonnes.

Whatever the games played on Comex and in London forwards, physical supply remains very tight.