Aside from a sharp dip on Wednesday, gold and silver have ended up more or less unchanged on the week. Gold was $1231, and silver up slightly at $14.78 at midday European time this morning (Friday). 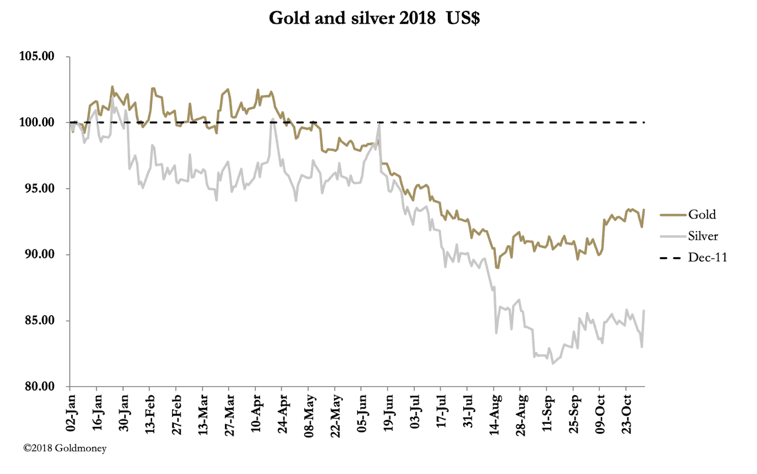 There is a firm undertone to these two markets, and we should ignore that mid-week dip, which was entirely due to option expiry on Comex, when market-makers smashed prices to make November calls worthless. This is why on the expiry day (Wednesday) gold was sold down to $1212, and yesterday it recovered back up to $1233.

The bear squeeze, which has been gently forcing prices higher, now continues. The background is still one of a heavily overbought dollar and oversold everything else. The technical position for gold is our next chart. 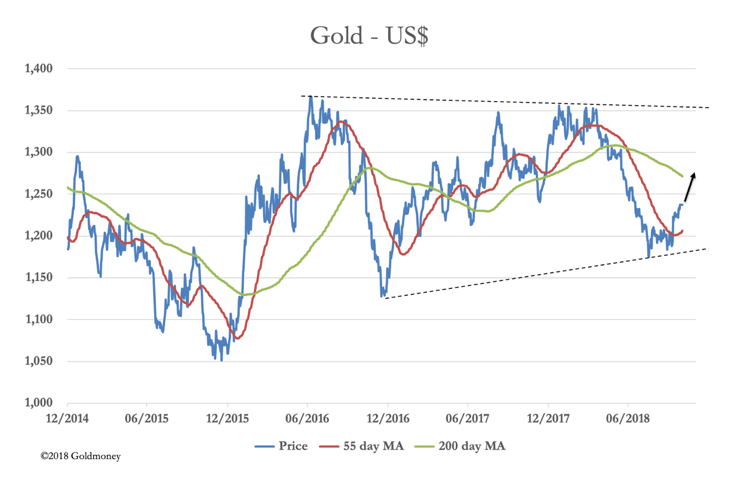 The gold price looks capable of challenging the 200-day moving average, which is currently at $1271. We can assume that a move towards that level would intensify the bear squeeze, giving a potential for a further run perhaps to the $1300 level.

The next chart shows gold’s performance this year in the major currencies, indexed to end-December last. 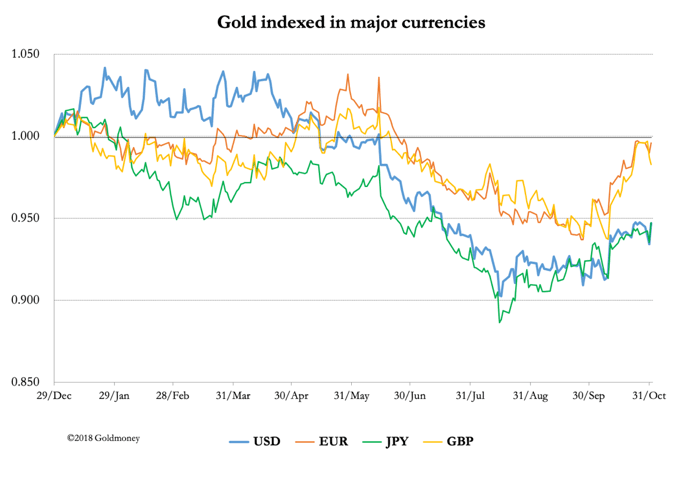 There is an understandable tendency to think of gold only in dollars. But for sterling and euro investors, gold has recovered nearly all the losses of the last four months. If, as our second chart suggests, gold is likely to rally further in dollar terms, in the coming weeks gold should show net gains in sterling and euros.

The dollar’s trade weighted index could easily rally further, given its heavy euro weighting. Euro-area economists are trying to tell us that the Eurozone economy is stalling, with zero growth in Italy, and even suggestions that the ECB might decide to extend its asset purchases programme beyond December.

One cannot help feeling that this is wishful thinking for the ECB, which has been badly caught out with negative interest rates and mispriced bond markets while US rates are rising. We can assume the ECB would love to be proved right, that there is no recovery, and therefore its monetary policy is justified. However, this belief would be in stark contrast with the US economy which is showing all the signs of overheating, likely to propel USD interest rates significantly higher.

There can be only one conclusion, and that is so long as the ECB sticks to its current monetary policies, the euro is going down the pan. So, we can see that the dollar’s trade weighted index can easily rise further, perhaps to the 98 level (currently 96) on euro weakness alone. So, while the dollar might appear to be strong in the coming weeks, it will likely be euro weakness.

This will not be good news for the gold bears on Comex, who can expect to continue to be gently squeezed while the dollar’s TWI rises. For euro-based gold bulls, they could be rewarded with positive returns from hedging out of euros into gold, in what appears to be a developing crisis for the currency.