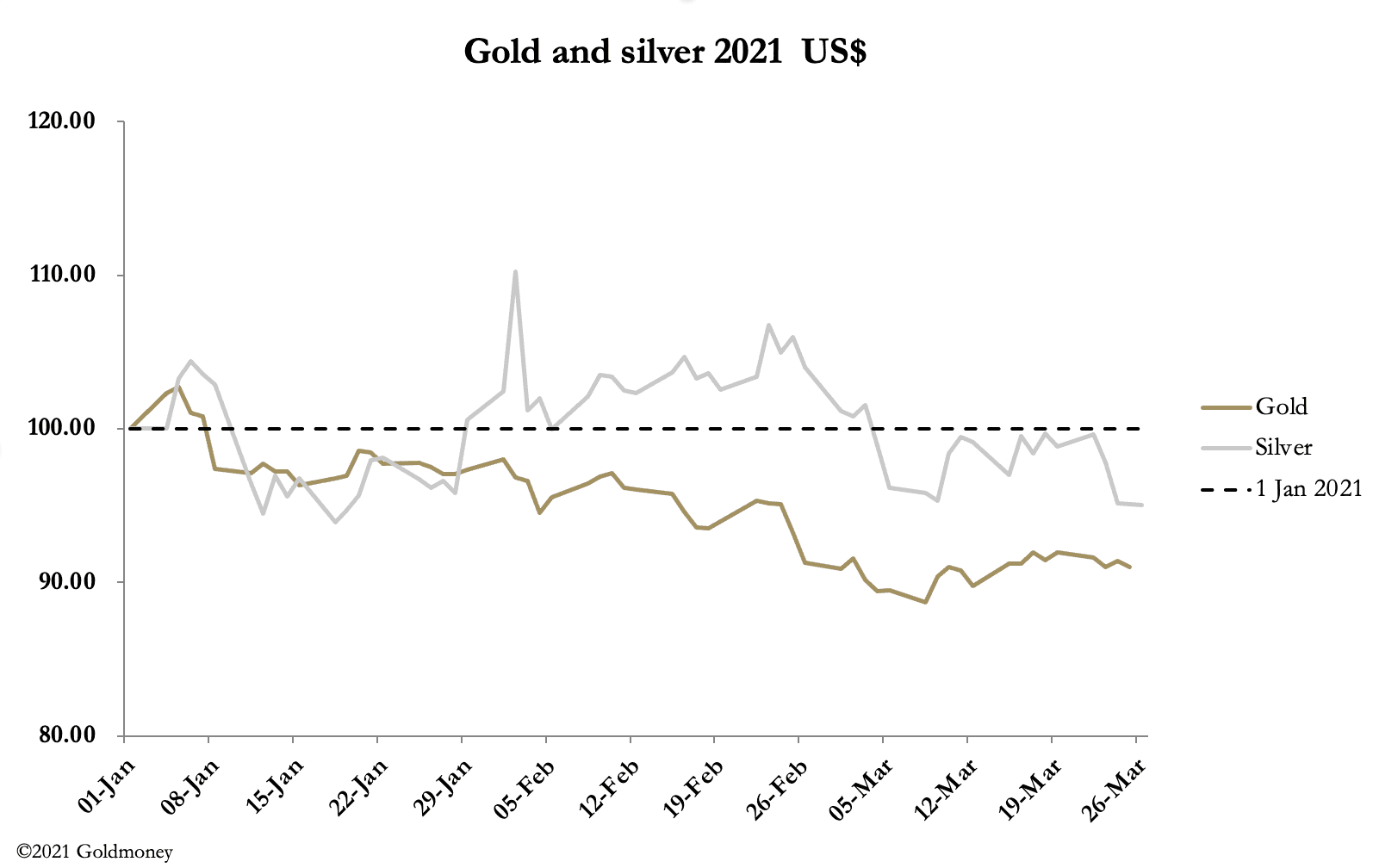 Gold and silver drifted lower on the week, with gold down $20 from last Friday’s close at $1725 in London morning trade, and silver down $1.20 at $25.03 on the same timescale. Yesterday saw the expiration of April options for both metals, and the bullion establishment appeared particularly keen to ensure that silver options with strike prices at $25 expired worthless. Accordingly, the silver price traded down to $24.45 yesterday, and by the close it had rallied to just above $25.

Next Monday will see the last day of trading for the April contract, and as of last night there were still 103,696 contracts yet to close, roll forward to June, or stand for delivery. It will be interesting to see the outcome, because information from global trading centres suggests that the only way to gain physical gold in reasonable quantities is by exercising the delivery option on Comex.

By default, the US dollar’s trade weighted index has rallied this week on euro weakness. This is our next chart. 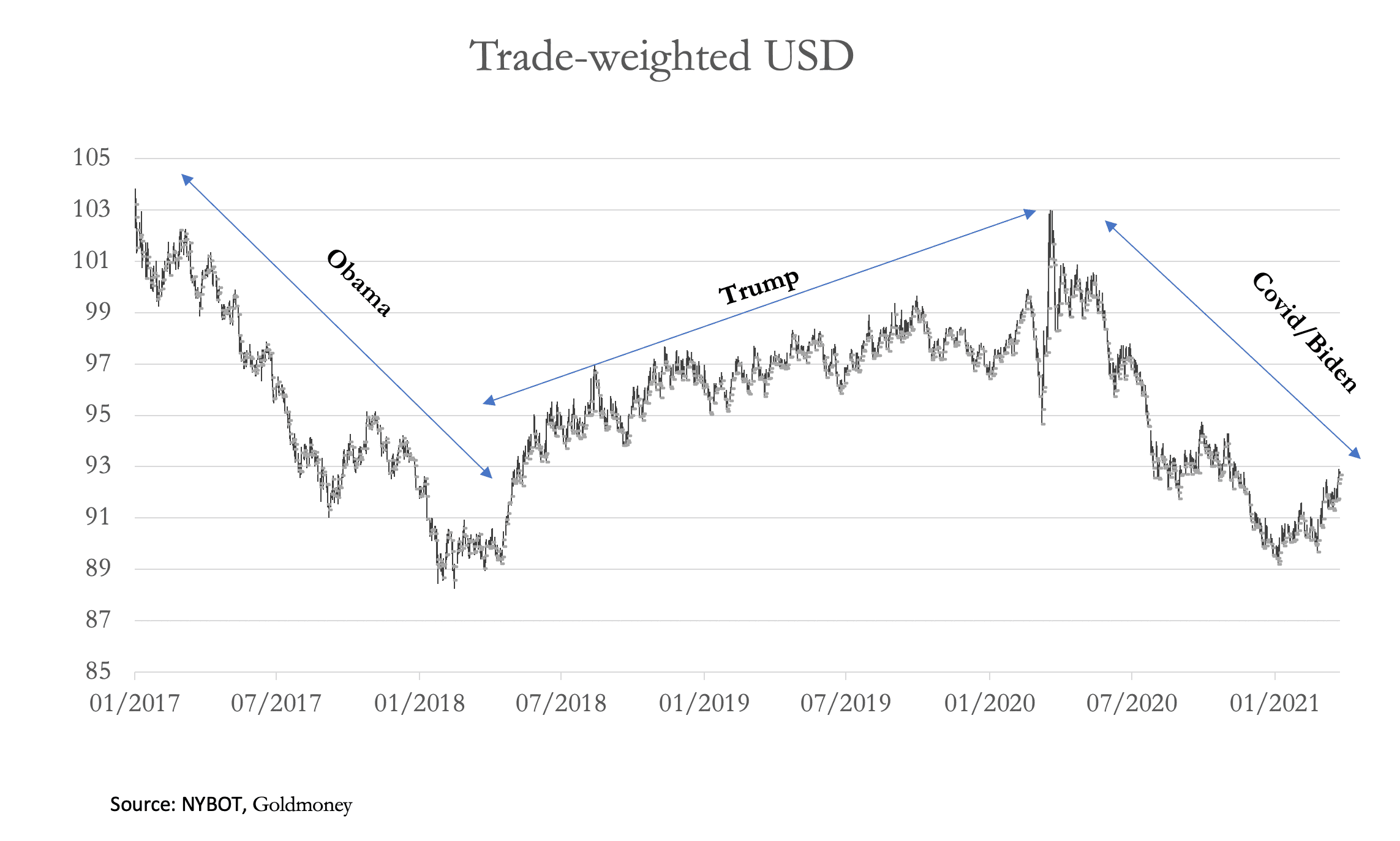 Given the Fed’s inflationary response to Covid-19 and continuing inflationary plans of the Biden administration, it is hardly surprising that the dollar entered a bear market last March. Equally, it is normal to see a bear market rally, but that does not negate a downtrend, which despite the interruption of the Trump presidency, appears to be a continuation from the Obama days.

The current rally is sparked by a realisation that bad though the situation might be for the dollar, the outlook for the euro is potentially more fragile, because of the failure to manage vaccine distribution. It is becoming clear that the EU is not going to emerge from pandemic lockdowns in the foreseeable future and the economic consequences for the PIGS, France, and their banks, are appalling. In this context, the recent rise in global bond yields is a major threat to the whole euro system. Therefore, the ECB will do everything in its power to suppress rates, even at the expense of the euro’s exchange rate.

US bond yields have drifted a little lower, after their dramatic spike last week. But as our next chart shows, this is almost certainly just a pause before rates continue to go higher. 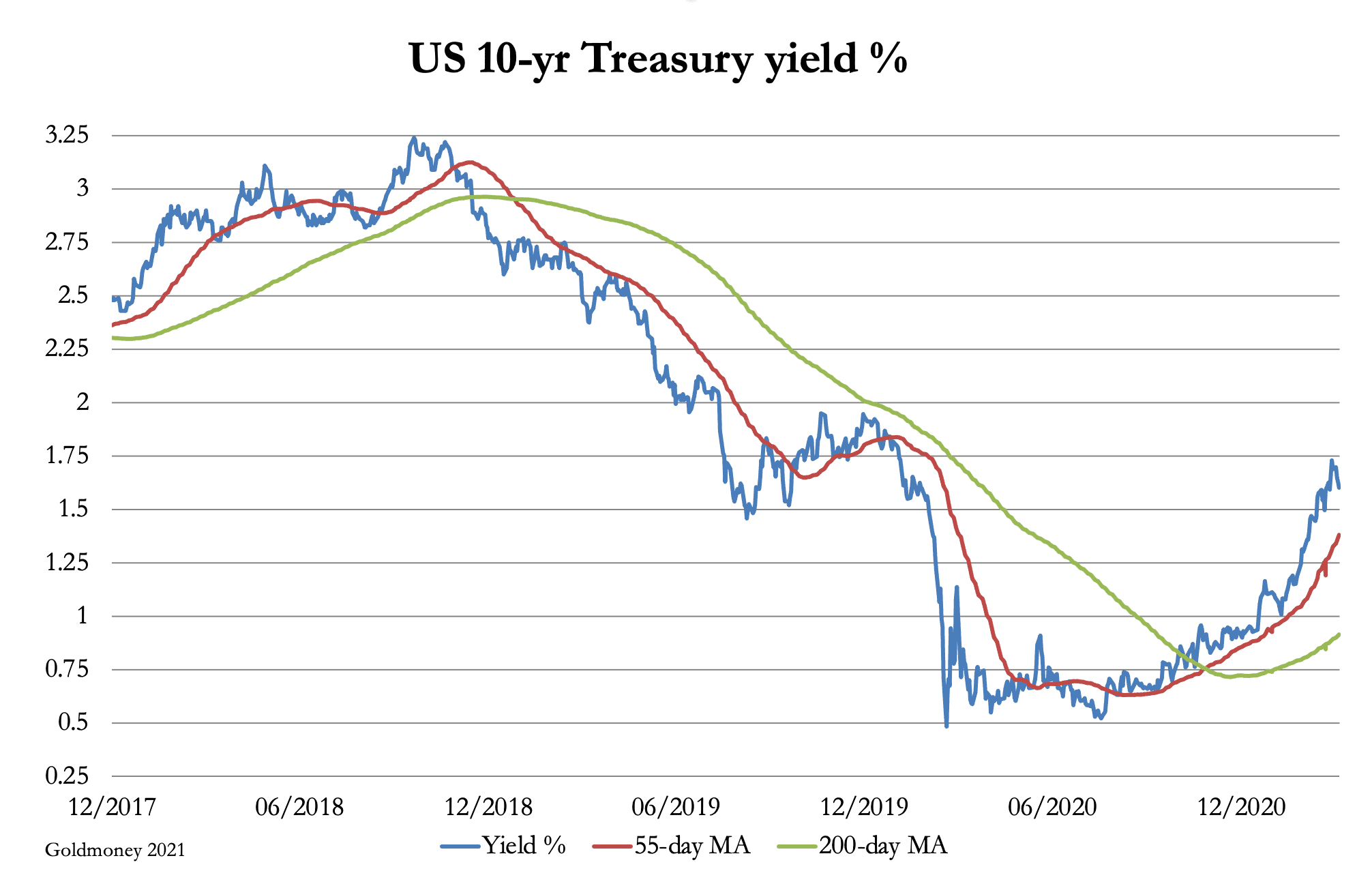 In this context and given that hedge funds in the managed money category regard rising bond yields as bad for the gold price, precious metals have performed reasonably. But surprisingly, perhaps, the hedge funds have not taken this conventional attitude as an analysis of the last available commitment of traders’ figures demonstrates.

While bond yields were moving strongly higher, the Managed Money category increased its net long exposure by 11,691 contracts, mostly by cutting their shorts. The Swaps (bullion bank trading desks) were forced to increase their net shorts by 4,200 contracts undermining their campaign to reduce them as low as possible. It will be interesting to see if this trend has continued into last Tuesday when the COT figures are released later tonight.