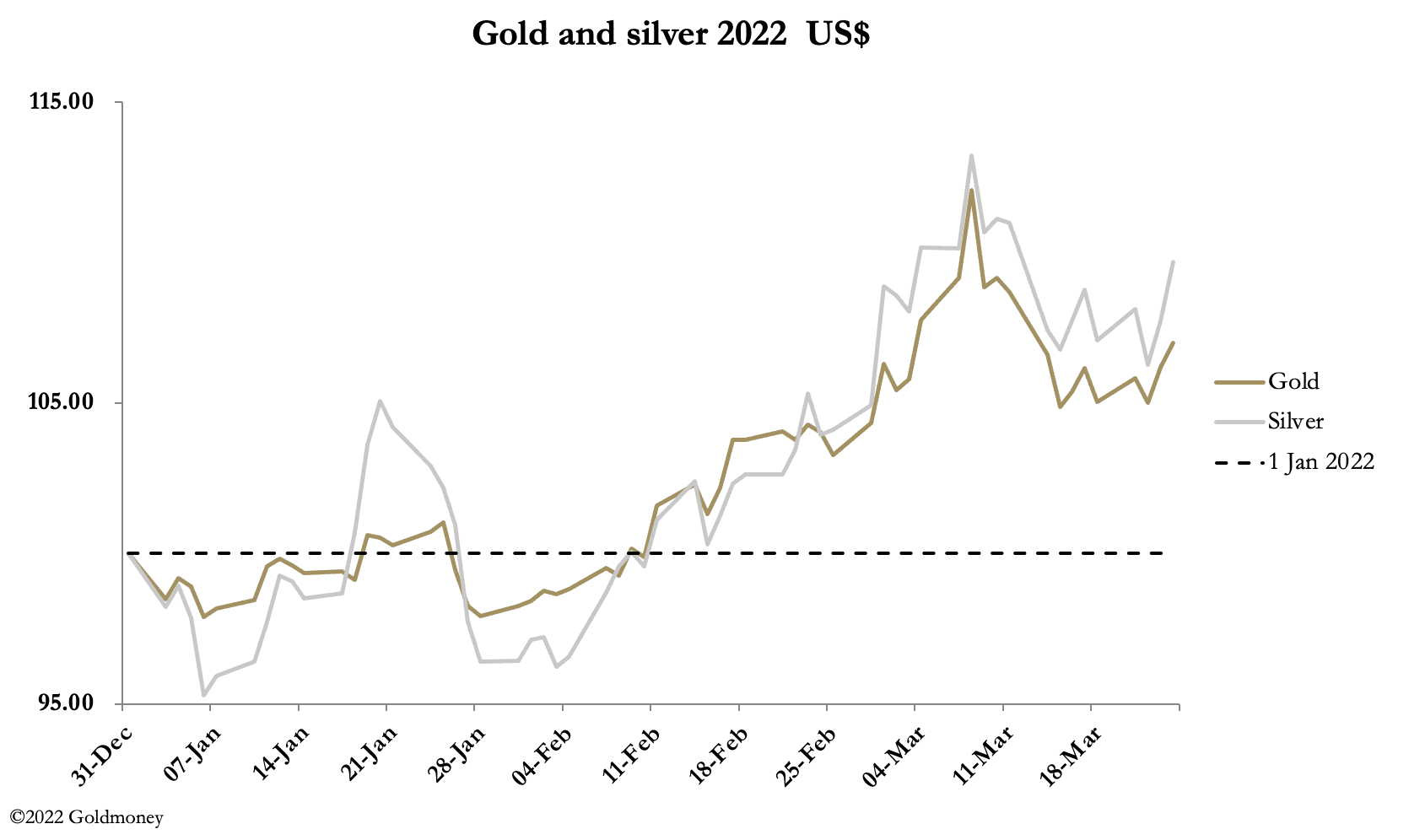 Following the recent sell-off gold and silver rallied this week, with gold trading at $1957 in European trade this morning, up $36 since last Friday, and silver was at $25.67, up 75 cents on the same timescale. Trading on Comex was subdued in both metals, picking up somewhat yesterday.

There are significant developments in markets generally. US Treasury bond yields have begun to soar, as our next chart shows. 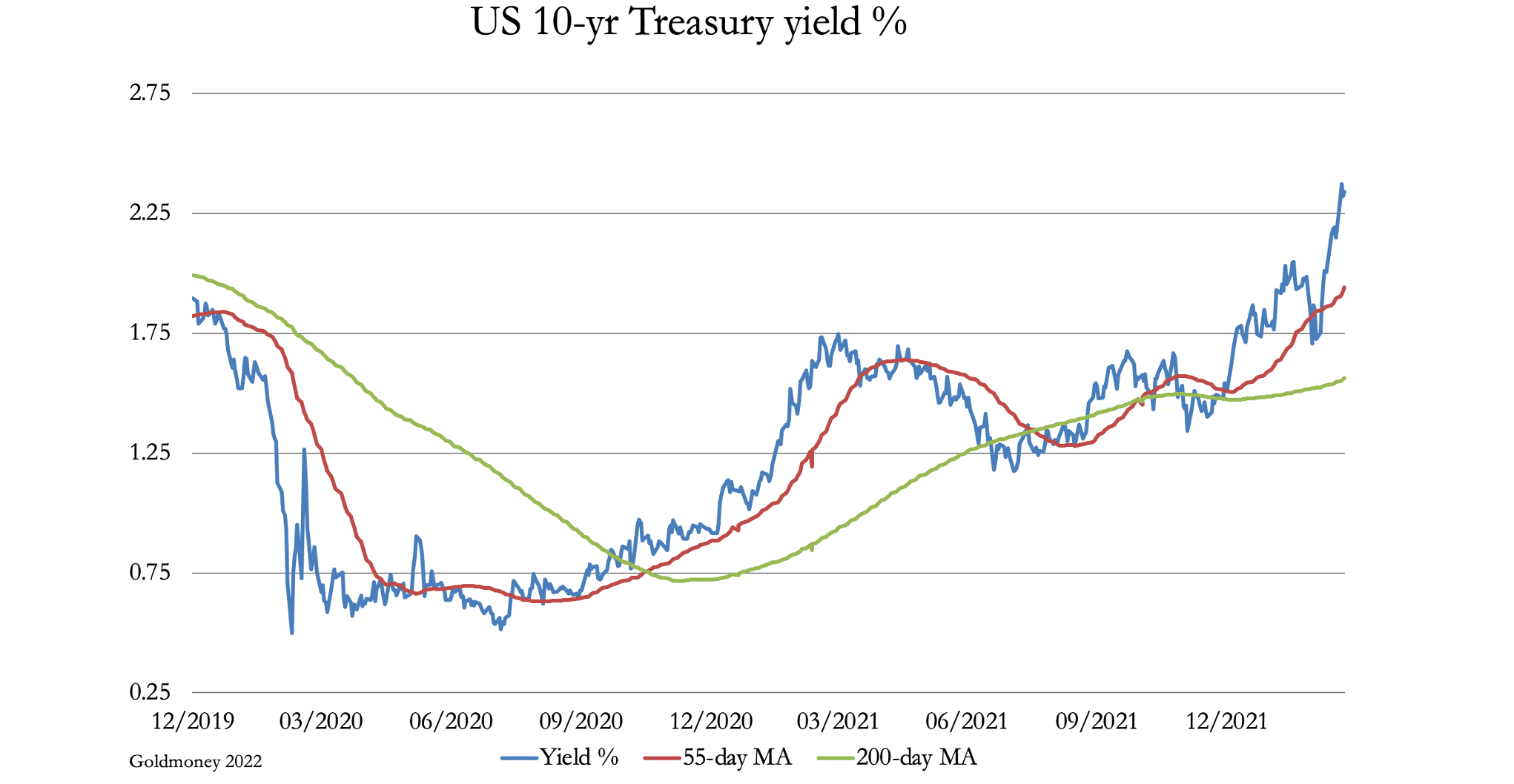 So far, soaring bond yields have yet to materially undermine equities, which are probably still seen as an inflation refuge. But in currencies, the yen is being destabilised. 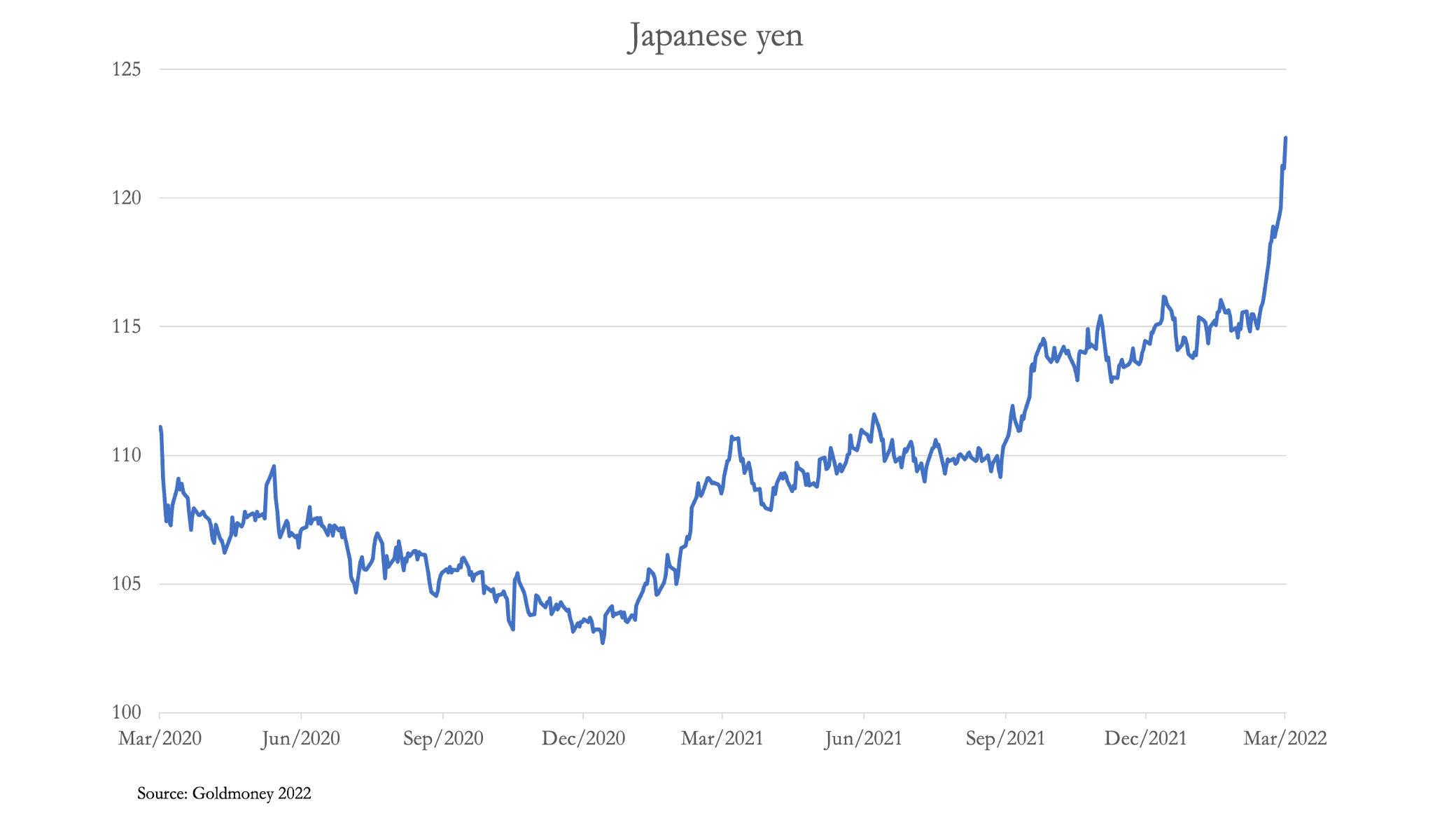 Bearing in mind that a rising number is a falling yen, it is in serious difficulties. The reasons are not hard to fathom. Commentators point to Japan’s dependence on imported raw materials and energy and the Bank of Japan maintains a negative interest rate policy. But more important perhaps is the fact that with its enormous portfolio of bonds and equities, rising bond yields put the BOJ in negative equity on a market valuation basis. In other words, it appears the yen rather than the euro is the first to crack in the current circumstances.

With the war in Ukraine on its doorstep, its financial and banking links into Russia and Eastern Europe ,and a negative deposit rate the EU and its euro is in great danger. This is next up.

Both the BOJ and the ECB have been badly caught out by price inflation and will be forced to raise rates from negative sharply higher – or else markets will do it for them That is the message from the foreign exchanges. But rising rates are bankrupting the central banks, and in the euro system the national central banks as well, which happen to be the ECB’s shareholders. Furthermore, the most highly leveraged commercial banking systems happen to be the Eurozone’s and Japan’s. A full-scale banking crisis from currencies down is in prospect

A collapse in two of the world’s major currencies promises to be dramatic and a major threat to the whole fiat architecture. Often, a major event of this sort needs a trigger, and perhaps we had that this week as well. The West is stepping up its financial sanctions against Russia and is now trying to ban Russia from selling its gold reserves. The major error is that Russia is not a seller of gold for fiat it cannot use and wants to get rid of, but a buyer. This was confirmed yesterday by Pavel Zavalny, chairman of Russia’s Congressional energy committee, who said. “When we exchange with Western countries, they should pay in hard money… And hard money is gold. Or they can pay in roubles”

Boris Johnson added fuel onto the fire by threatening to stop Putin using gold reserves. One wonders how this comment is received by the central banks who store their gold reserves at the Bank of England. And even more importantly, those who have gold out on lease or swap, so don’t even have possession in custody.