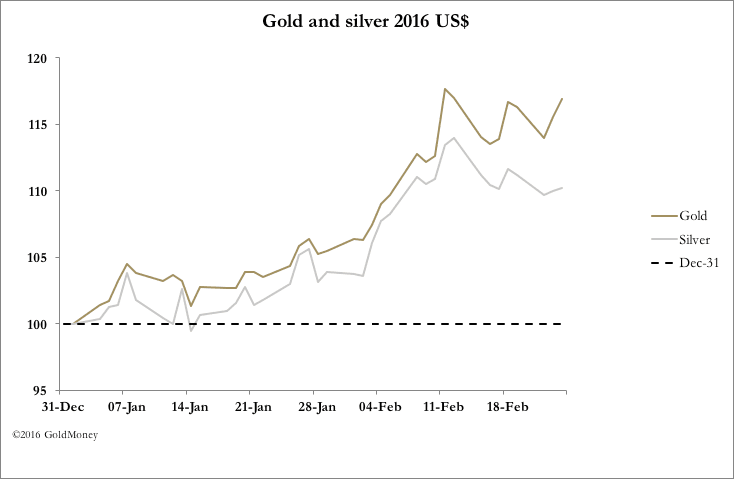 It may be too early to say the correction in precious metal prices, which followed an impressive run-up that ended on 11th February, is over, but gold's performance this week has been bullish.

On two occasions at least, attempts by market-makers to shake speculators out of long positions failed, only generating more buying on the dip.

The most notable instance was Sunday night US-hours, which is Monday trading in Asian time zones. There are few natural dealers in Comex/Globex futures in that time, so the move was almost certainly orchestrated by professional dealers with short books, seeking maximum impact on the gold price. While the bulls have cause to rejoice in their subsequent failure, they should be wary that market-makers will try this tactic again.

It is becoming increasingly likely that gold is in the early stages of a new bull market. Establishment analysts, who tend to be behind the curve with market developments, are clinging on to their forecasts that there may be more downside before gold is right to buy. Partly, this is due to their economists' forecasts that the US economy will grow this year and the Fed will raise interest rates. This position is looking increasingly untenable, so the fundamental prospects for the dollar, measured in gold, are deteriorating by the day.

Technicals are hard to ignore, with a bullish golden cross in prospect in six or seven trading sessions' time, as described in last week's report. That chart, updated, is repeated below. 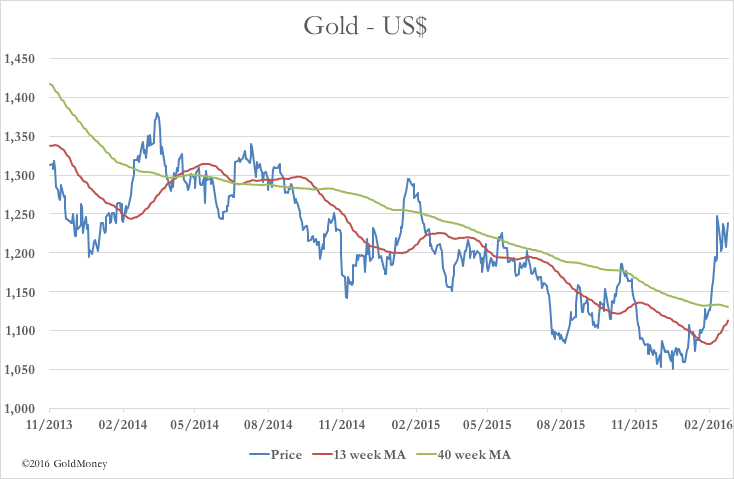 The reason that technical analysis matters is traders use it for day-to-day guidance, and whatever the financial and commodity analysts say, the trading desks will pay more attention to the market. The impressive strength in the gold price will make them pause for thought before attempting to drive the gold price downwards into yet another bear phase. Instead, they will now look to limit losses on their short positions by covering when the opportunities arise.

Interestingly, the silver price has been left behind badly, with the gold/silver ratio at an exceptionally high 81.8 times this morning UK time (Friday). This is consistent with a market reflecting the early stages of gold's renaissance, and one would expect the silver price to outperform when late-joiners who have missed the turn in gold look for related alternatives.

The US dollar's weakness has been predominantly against gold and the Japanese yen. Commodity prices, such as energy and base metals, may have bottomed, but it is too early to bet on this position. The dollar has benefited from marginal weakness in the euro, which is the largest component in the trade-weighted index, the euro falling about 3% in the last fortnight. On balance the dollar's trade weighted index has risen slightly.

Sterling has been notably weak on fears that the June referendum will result in Brexit. Therefore, markets are uncertain that the trading arrangements with Britain's major trading partners will persist, which explains why sterling, measured against US dollars, is now at a multi-year low. The beneficiaries of this currency turmoil are principally the residents of the UK who have bought gold. EU residents, faced with this new political uncertainty and negative interest rates, are likely to increase their physical gold exposure as well in the coming months. Since December 31st, gold in sterling is up 23%, in dollars 17%, and in euros 15%. This is shown in our final chart. 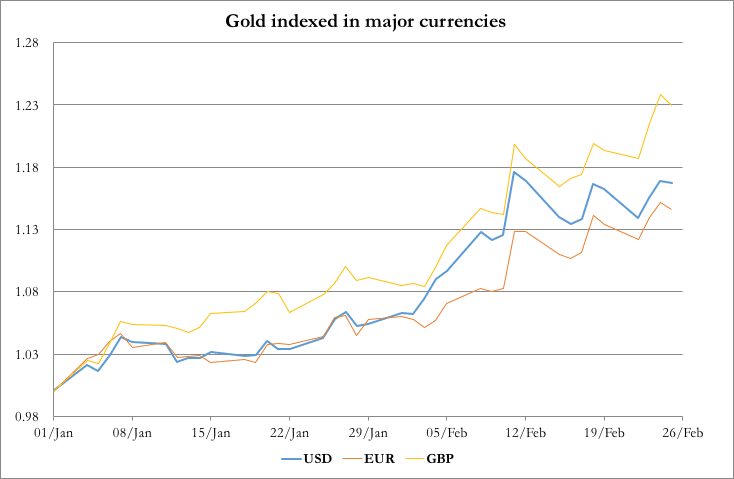