After a very strong rise last Friday precious metals drifted lower-to-sideways for most of the week, but behind this unexceptional behaviour there are some tectonic shifts under way.

The chart below is of the gold price and open interest on Comex. 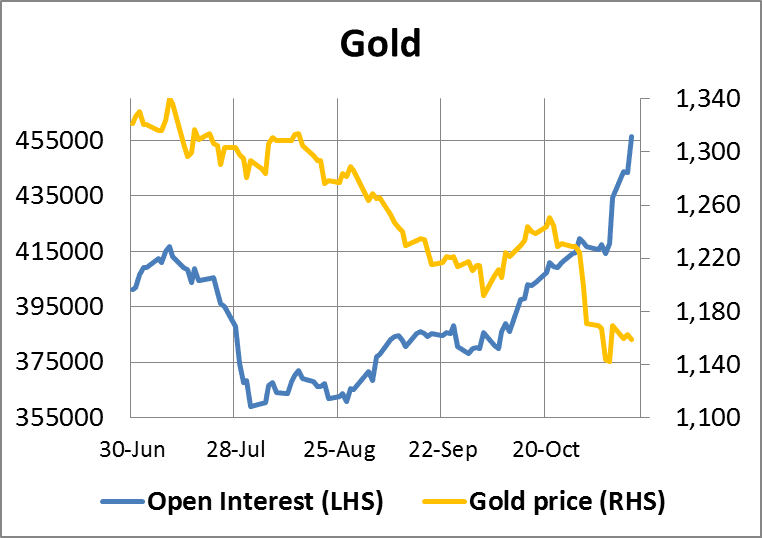 When the price rose on Friday open interest increased by 16,366 contracts, an enormous rise, and volume was exceptionally heavy as well. Events such as this often mark a turning-point in markets, and open interest has continued to grow, especially on Wednesday when a further 12,852 contracts were added. Furthermore, the gold forward rate in London between spot and one month has gone sharply negative, indicating a severe physical shortage.

Last Friday's exceptional action was noted by technical analysts, so much so that the Bank of America's MacNeil Curry, their chief technical analyst, instantly called it a major bottom. Since chartists all follow similar methods it is very likely that the record number of shorts harbour serious doubts.

The next chart is silver. 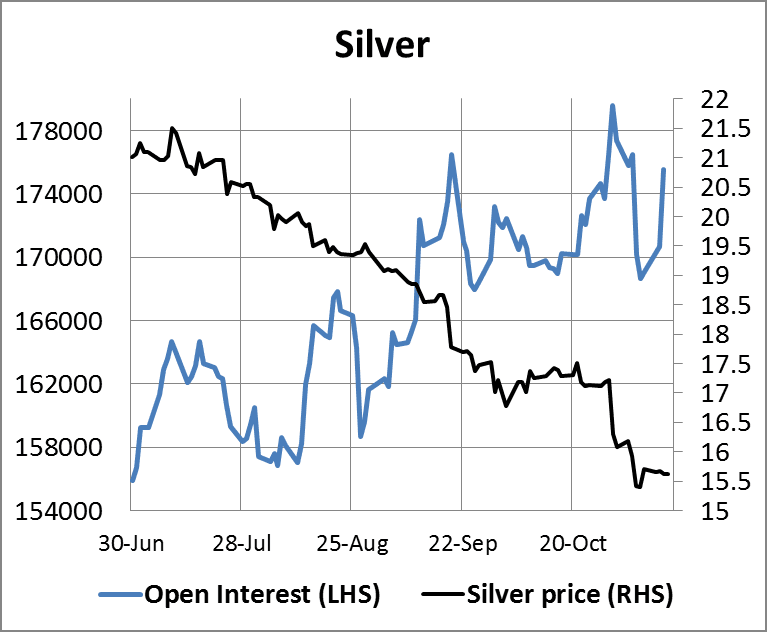 There's no doubt that the action is in gold rather than silver, and while volume was good on Friday when gold had its sharp rise, silver was noticeably muted until open interest rose strongly on Wednesday. If silver is to recover from here, it looks like it will be led by gold. In both cases however, the jump in open interest tells us it is new buying and not bear-closing driving the market, which is positive.

I referred to tectonic shifts in my opening paragraph. This week combined regulatory fines inflicted on five major banks totalled $4.3bn, which according to the Financial Times takes total bank fines in 2014 to a staggering $56.5bn. The latest settlement was in respect of foreign exchange fixes only; but earlier in the week the FT ran a story that one of the banks, UBS, is to settle allegations of misconduct at its precious metals trading business at the same time. However, in the FCA's notice there was no mention of precious metals, so that is presumably to come. So is the result of the German bank regulator's (Bafin) investigation into Deutsche Bank's precious metals dealings.

Dealers in the major banks are now reluctant to talk to almost anyone in other firms in case innocent remarks are misconstrued. The result is that dealing collusion has become more or less impossible, so it is reasonable to assume that control over gold and silver prices by the big players acting in concert will be significantly reduced in future. This is important, because it appears to rule out some of the actions routinely used in the past – April 2013 springs to mind – when severe shortages of physical metal threatened to drive the price considerably higher.

In short, continuing regulatory investigations are likely to extend to announcements involving precious metals, and dealers are now so jumpy we can effectively rule out future collusion. We will probably look back on these developments and conclude that they have fundamentally altered the character and behaviour of the market. And our starting point, indicated by a near-record negative Gold Forward Offered Rate (GOFO) rate, is an acute shortage of physical stock.