This week gold fell from a high of $1390, achieved late on Sunday night European time, to a low of $1322 last night before rallying $15 on London's opening this morning. To put this fall in context, the gold price had increased by over $200 since 31st December, so the correction this week was about one third of the rise, normal in that context. The action was in gold rather than silver, whose trading volumes were subdued in comparison, and their relative performance in the year to date is shown in the chart below. 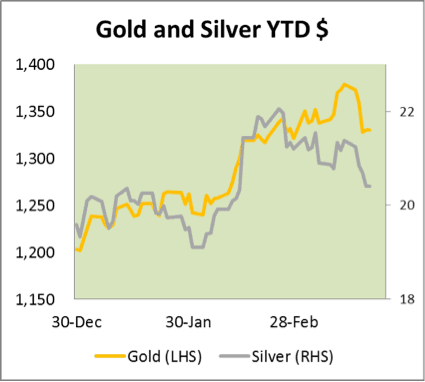 There were a number of factors undermining the gold price this week, including the following:

It's a pretty powerful list. The general tone of financial markets is tilting perhaps towards deflation. China is trying to slow monetary growth, leading to revised GDP forecasts, and possibly the end of her property bubble. To this we add the Fed's monetary policy, which on the basis of this week's FOMC meeting appears to be less inflationary in tone. In the cliché of old, gold is climbing a wall of worry.

All this is essentially short-term noise, so long as central banks continue to rely on printing money to rescue the global economy and the financial system at times of stress. A deflationary crisis will always provoke an inflationary response, and that is what the primary trend in gold and silver is all about.