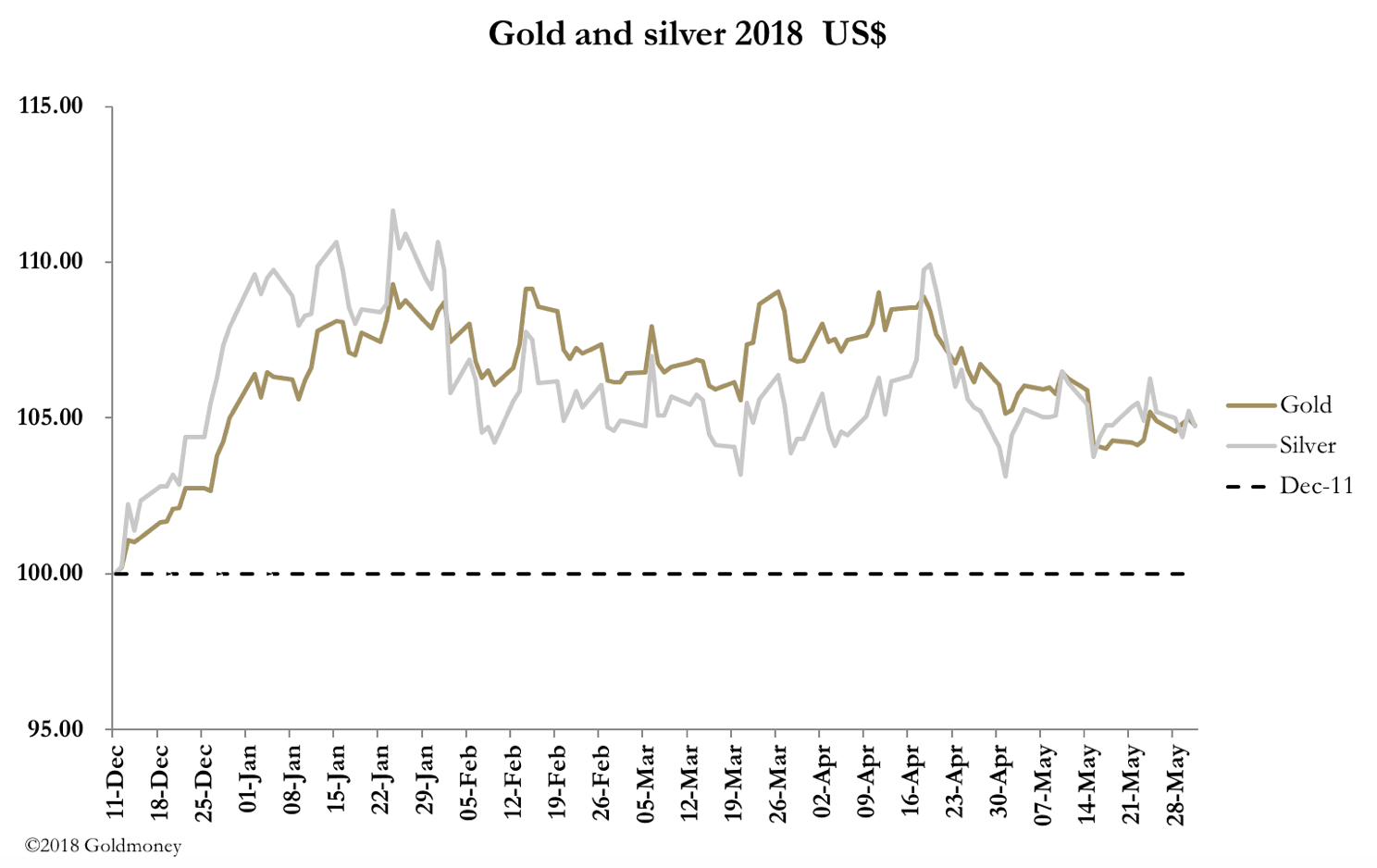 Gold and silver range-traded this week with no discernible direction. By early European trade this morning (Friday) gold had drifted $2 dollars lower to trade at $1399.5, and silver 3 cents lower at $16.45.

On Comex, the June gold contract has now gone, with only 7,742 contracts left, some of which will presumably stand for delivery. Tuesday’s volume was exceptionally high at just under 750,000 contracts, against a normal average of 450,000. Interestingly, this would usually be the opportunity for the bears to squeeze the bulls, but it didn’t happen because gold on Comex is very oversold and the price barely changed.

There is a notable exception. The Commitment of Traders Report has three basic categories: Producer/Merchant/Processor/User, Swap Dealers, and Managed Money. There is one more category, Other Reportables, which the Regulator defines as “Every other reportable trader that is not placed into one of the other three categories”. Now look at the following chart. 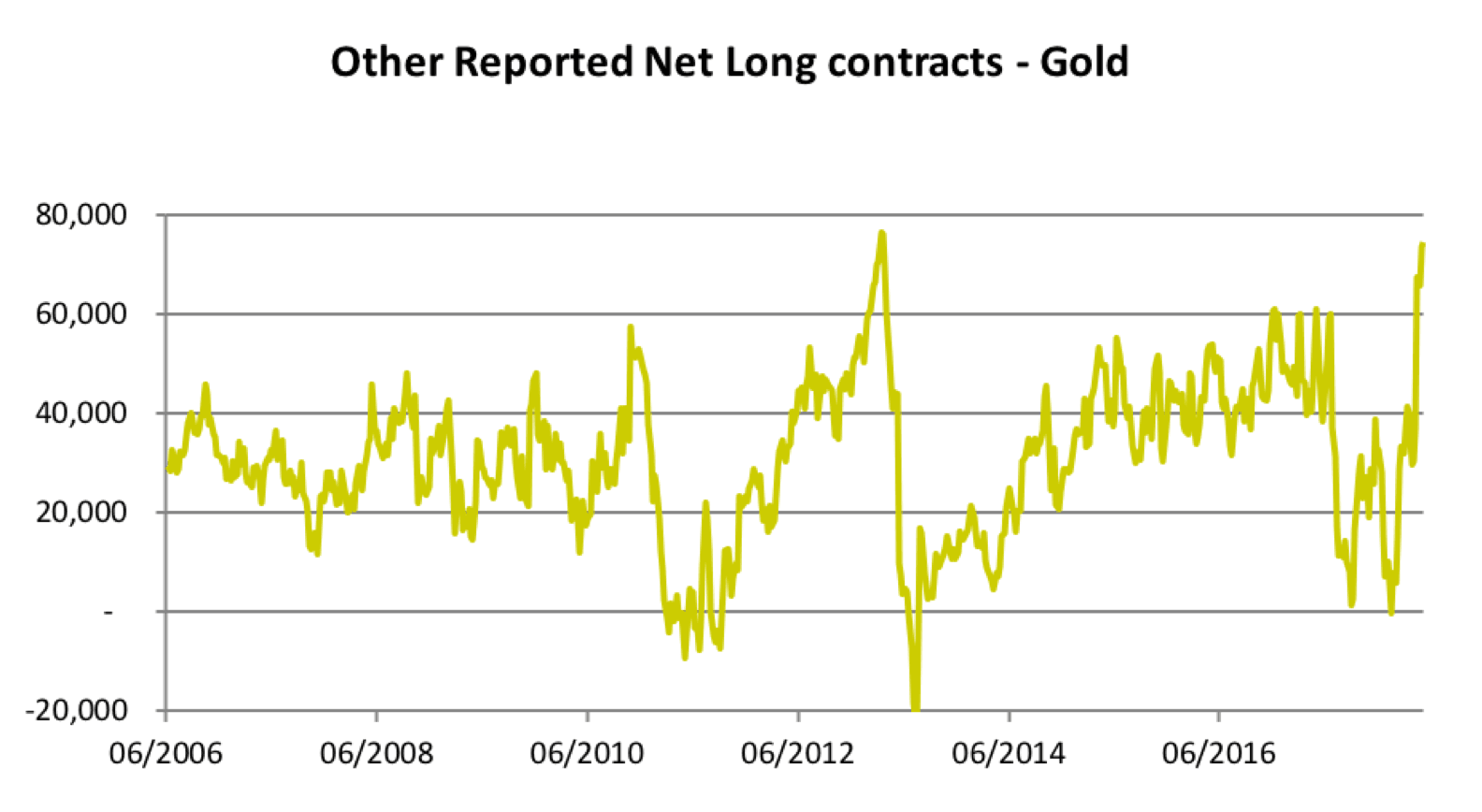 At a time when on any other measure gold is very oversold, this category has gone extremely long. Digging further into the COT report, we see that the increase of a net 40,000 contracts has due to about extra 12 traders, so these are significant players. A best guess in the absence of further information is that some members of the Billionaire’s Club, most likely Asian, are hedging their weakening currencies.

Otherwise, gold is oversold and hovering at the $1300 level. Our last chart shows gold’s consolidation in the form of a triangle, with the price and its moving averages concentrating in the same area. 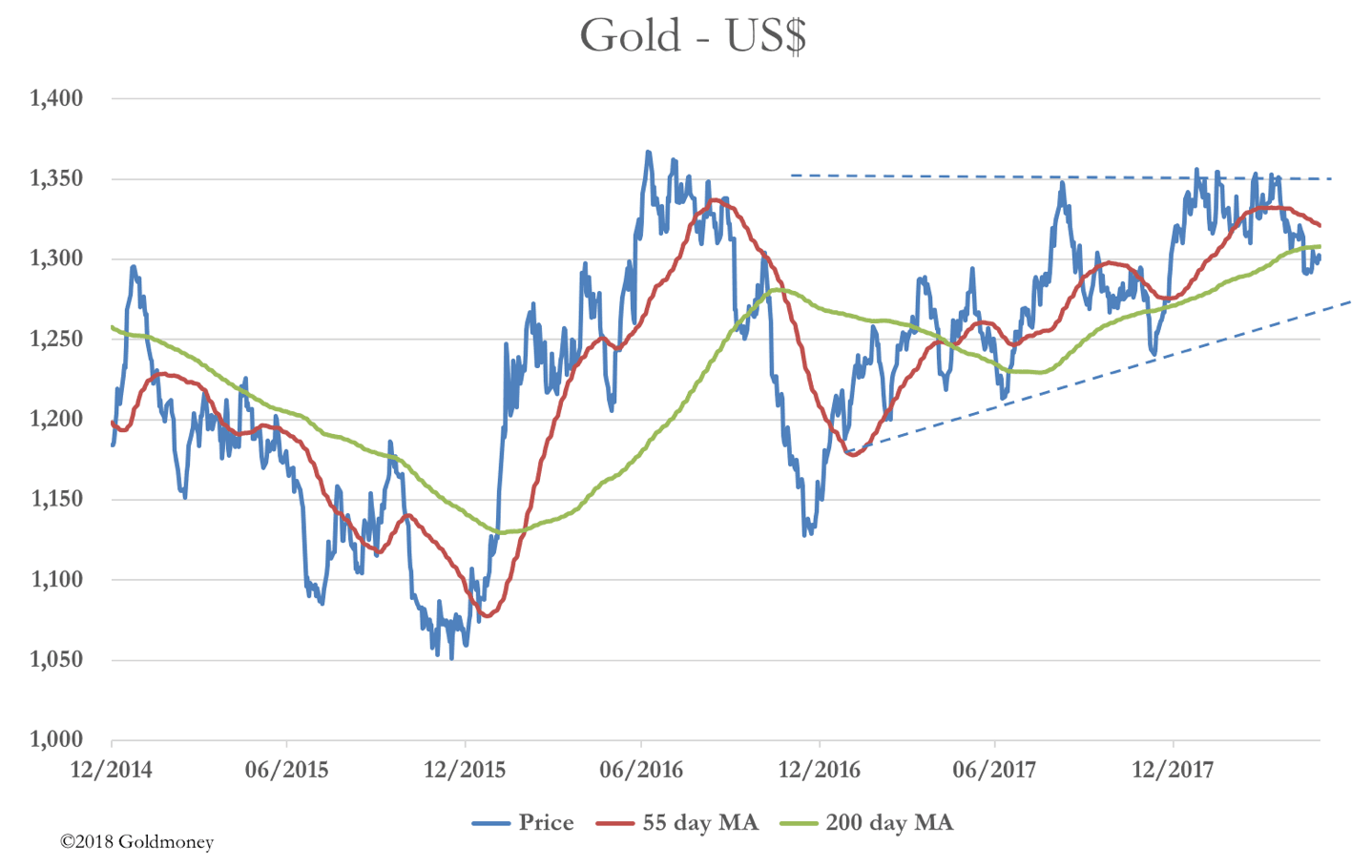 There’s plenty for bulls and bears to argue over in this chart. We shall leave them to resolve it and turn our attention to fundamental developments. There are two worth mentioning, Italy and trade tariffs.

The Italian elections resulted in a coalition of two anti-establishment parties, who seem to agree that Italy should have her debts written off and ditch the euro. They are essentially inflationists. This has come as a shock to complacent capital markets, with the euro falling and equities wobbling. The dollar’s trade weighted index rose, and foreign exchange traders talked of flights to the dollar etc.

In dollar terms, this should be negative for gold, yet gold held up well. At this stage, my best guess is the Italian story will rumble on for a while before any crisis materialises. Experience has taught us that the EU and the euro are a sort of Hotel California, which you can never leave and that is the reality Italy is facing. If an Italian government was arguing and had an electoral mandate for a complete exit it would be a different matter. And as the Greeks found, without that the answer is simply “Nein”.

The second issue, which is potentially more important, is yesterday President Trump announced his long-mooted steel and aluminium tariffs of 25% and 10% respectively against the EU, Canada and Mexico. This is economically retrograde, but in a world of fiat currencies will end up inflationary for the dollar, and anyone else who goes for reprisals.