Market Report: Gold in doldrums at $1500

Gold and silver traded in a narrow range this week, with gold still stuck around the $1500 mark. Turnover in silver dropped off as volatility declined. By early morning trading European time today, gold had declined $5 to $1499, and silver had gained 12 cents to $17.67. 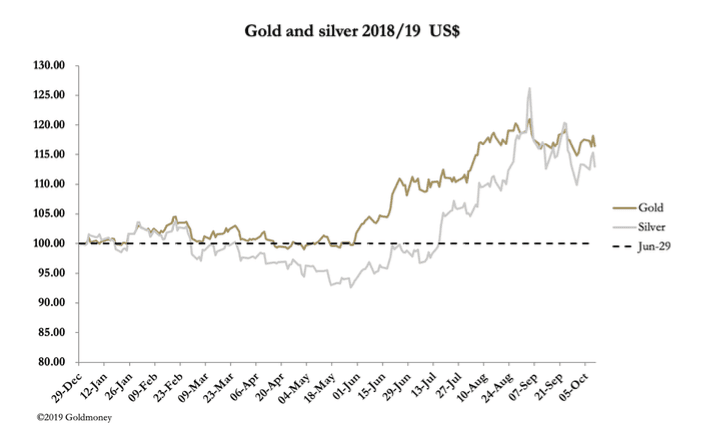 Both precious metals are in a consolidation pattern. The purpose of consolidating previous rises is to absorb profit-takers and to create a sound basis for the next leg in the underlying price direction. The measure commonly used as an indicator on Comex is the net position of the managed money category, comprised of large speculators. This is our next chart. 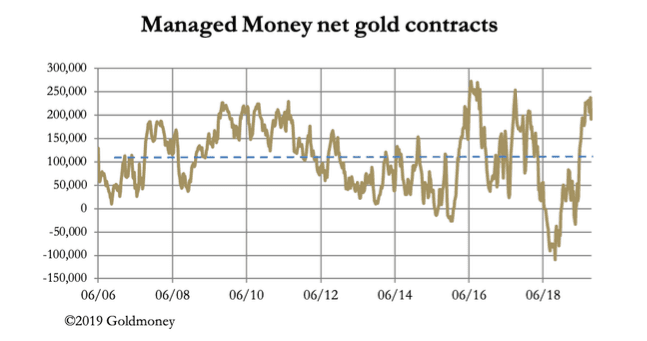 At net long 190,811 contracts this indicator is firmly in overbought territory. Worse still, the last data point was 1 October (we shall get updated figures for 8 October tonight). Since then, gold has rallied from a low of $1460, which suggests this indicator is more overbought today. This being the case, and all else being equal, gold needs more consolidation before a further sustainable rise can take place. Therefore, a dip to $1450 looks likely, possibly going as low as $1420-1440, testing levels last seen in July.

Our next chart shows the managed money position in silver. 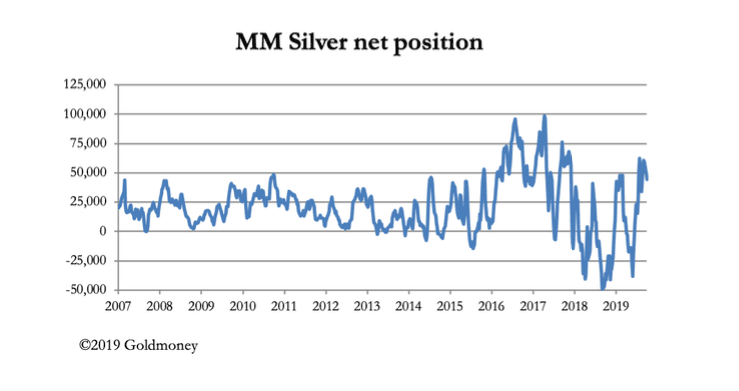 Silver is better placed on this measure, with the moderate overbought position looking normal for a bull market, suggesting the silver price can rise relative to gold, if not yet in absolute terms. The drop in turnover last Monday to only 37,194 contracts while the price drifted a net ten cents was the lowest for a long time and suggests that selling pressure at these levels is minimal.

The wider financial scene is equally indecisive, with a sudden bout of profit-taking in bonds, when the yield on the 10-year US Treasury bond rose from 1.512% on Tuesday to 1.66% yesterday. If a weaker tone in bonds persists, this can be expected to disfavour precious metals.

Meanwhile, evidence still mounts of slowing economic conditions around the world. The ECB’s response has been to anticipate further weakness for the Eurozone and reintroduce quantitative easing and reduce its deposit rate to -0.5% from next month. Ahead of Draghi’s resignation and Christine Lagarde taking over, splits have emerged in the executive council over the wisdom of a new round of monetary easing. Sabine Lautenschlaeger, the German representative has resigned effective next month, a decision likely to escalate divisions between the Bundesbank and the ECB. For the fact is the ECB through negative rates is robbing German savers, the bedrock of Germany’s relative success.

This argument looks like being a temporary spat, because if, as seems likely, the Eurozone continues on its recessionary path, German banks even need rescuing. Add to this the Brexit problem for the Eurozone and there is a perfect storm brewing.

Meanwhile gold and silver await developments. Our last chart shows gold’s wider performance since the start of its bull market, or more correctly the slide in paper currencies. 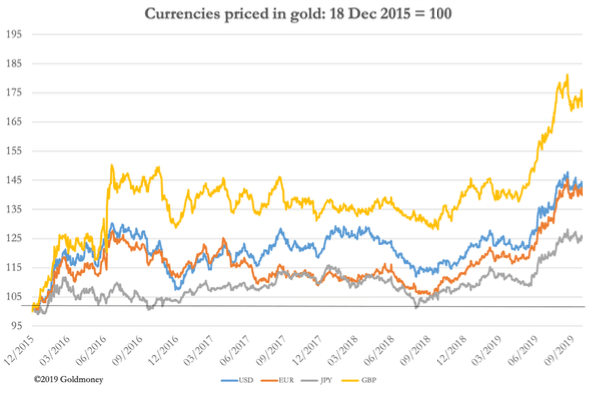