From last Friday's close at $1322, gold opened strongly on Monday trading, as high as $1355 before losing two thirds of the rise on Tuesday. On Thursday afternoon (GMT) gold rallied back to challenge the $1350 level. This morning (Friday) it is in the balance as to whether or not gold will need more consolidation before moving on towards $1400, with everyone watching out for US employment numbers.

The change in sentiment over the last eight weeks has encouraged small traders to go long on gold. Normally market-makers would be able to mark prices down aggressively to shake out these short-term speculators, but it has not recently happened. This suggests that the underlying market is robust.

Admittedly political developments in the Ukraine are acting as a positive factor, potentially stimulating regional gold demand from countries such as Turkey. There are signs that investor liquidity may also be building in China, driven by bond market concerns. China suffered a minor corporate bond default this morning, notable because it is the first that has been allowed to happen, and it has led to other planned issues being put on hold. Gold is likely to benefit, driven by a new source of Chinese investor anxiety.

In theory at these levels there are stale gold bulls from last October/November to take out before the price can regain the $1400-1420 level, which halted the July/August run-up last year. This can be seen in the chart of the gold price below. 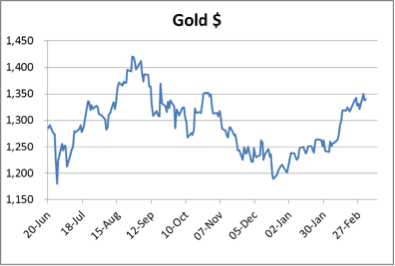 Neither of these supply hurdles should be significant, because of the significant change in underlying sentiment. Furthermore, the ephemeral nature of futures contracts makes past supply levels progressively less important with time.

Silver which is normally twice as volatile as gold, underperformed in January before catching up somewhat last month as shown in the second chart. If gold gets above the $1350s, silver will still have some catching up to do. 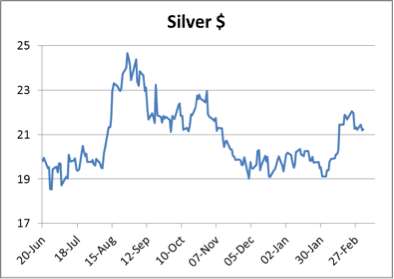 The futures markets for precious metals are now at a crossroad. The short positions of the hedge funds, which have driven gold and silver prices higher have now been significantly reduced and are no longer extreme. In gold the bullion banks appear to have taken these positions onto their books and also as swaps. In silver, the shorts have been crossed out against matching longs with open interest falling by 18,000 contracts since mid-February. So instead of precious metals being driven by a bear squeeze, the market will need to either continue to lose physical metal to Asia or find growing support from new bulls attracted by the reversal in trend.

Both are quite likely, and probably explain why gold is bid, despite some obvious profit-taking.