This week gold and silver fell sharply. The principal reason was the expiry of the June gold future contract on Comex, whose open interest has unwound 120,000 contracts in the last six trading sessions. Some of this has been rolled forward, but Open Interest still took a bad knock as shown in the chart below. 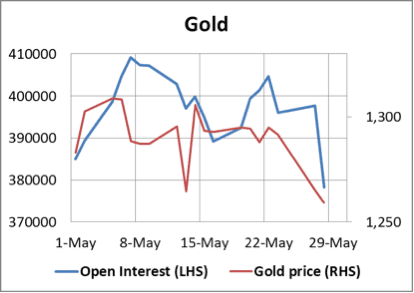 As of this morning there are only 5,454 June contracts left to sell or roll, so this selling pressure is effectively over. In silver, which has not been pressured by an active contract expiry, open interest has been increasing steadily, as shown in the next chart. 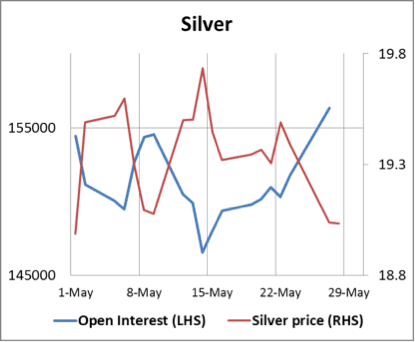 Silver's OI appears to be driven by an increase in short positions in the Managed Money category, so hedge funds are presumably anticipating the July contract running off the board. Anyway their shorts are now at a new record high, which is technically bullish. 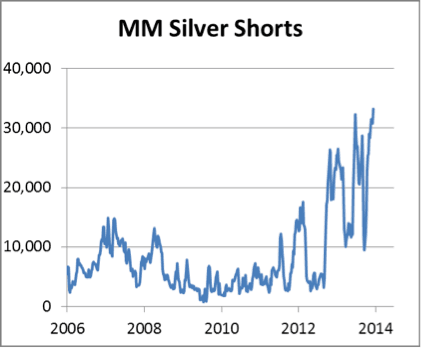 It's worth remembering that Managed Money, which is another way of saying "hedge funds", rarely takes a straight bet. Instead this category buys or sells precious metals as a counterpart to positions in other markets. So selling down gold and silver futures while physical demand still outstrips supply is to some extent a counterpart of bond and equity positions. And here it's worth noting that bond yields have collapsed this year, as shown in the chart of UST 10-year bonds. 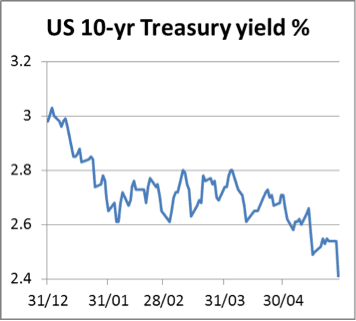 It's not confined to US Treasuries: high-risk assets such as Spanish and Italian 10-yr bonds now yield an incredibly low 2.81% and 2.92% respectively. It is an open question as to how the gold price will react when these obvious anomalies are corrected.

Away from the hurly-burly of markets there have been some important developments for gold. Russia announced last week she had bought 28 tonnes of gold in April, despite her currency reserves being under pressure from capital outflows. Vladimir Putin stated at the St Petersburg International Forum that "for us (Russia and China) it is important to deposit gold and currency reserves in a rational and secure way". Given that currency reserves are always held in accounts at the originating foreign central banks, he must have been referring to gold rather than currencies.

Meanwhile China is expanding her control over global gold trading having invited a select group of western banks to participate in an additional trading platform based in the Shanghai free trade zone.

Thus, Russia and China are the geopolitical equivalent of a pair of purse seine net trawlers quietly encircling unsuspecting gold dealers in western paper markets. Watch what happens to the gold price when the bottom of the net is drawn together, cutting off any escape through lower prices before they realise they are fatally trapped.