It transpired last week that of the 43-odd tonnes per annum the Bundesbank expects to be returned from the New York Fed only 5 tonnes arrived in 2013. Furthermore, of the 373.7 tonnes stored with the Banque de France only 32 tonnes was delivered. This is little more than a morning's delivery in the London market, so it is hard to swallow the Bundesbank's excuses about logistics.

The burning question is why is it so difficult to get its gold back? The most logical answer is that the Bundesbank's gold is long gone, but without hard evidence this can only be conjecture. One would have thought that the New York Fed would have at least come up with closer to 40 tonnes if only to stop the rumour mill running.

There may be a risk that without clarification over the status of Germany's gold at the New York Fed other central banks using the Fed or even the Bank of England's storage facilities might decide to buy gold in the market, just in case. If that happens, bearing in mind that it is too early to think this is a real possibility, bullion prices could go much higher, given the lack of physical bullion available.

Anyway, after a slow start to the week, with the gold price drifting back to find support at the 50-day moving average, gold began to go sharply better yesterday before the London morning fix. Soon there was a story circulating via Reuters that Sonia Ghandi has asked the Indian government to ease up on gold import restrictions. No doubt this has something to do with mid-year elections, and if so there is the prospect of the government relenting on gold import restrictions to appease the voters.
These stories no doubt contributed to a more positive tone for gold, which seems to be overcoming the confines of the 50-day moving average as shown in the chart below. 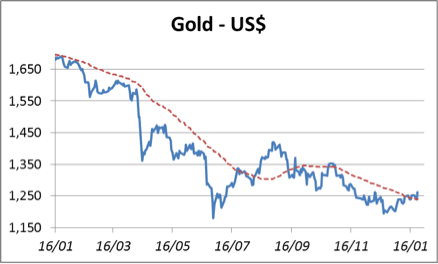 The 50-day moving average is losing downwards momentum, indicating the gold price may be on the turn. The relevance of this average is that short-term traders often use it for market timing. Therefore, if gold manages to move convincingly through apparent supply above the $1260 level, we can expect these traders to close their shorts and go long. The chart for silver is shown below. 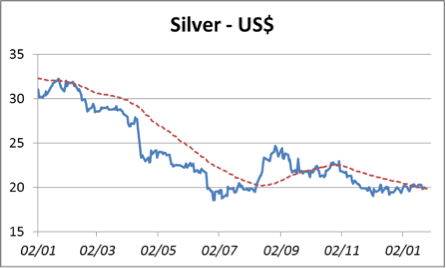 As with gold, silver is showing similar signs of bottoming out, as it tries to escape the confines of the $20-21 area and the 50-day moving average.

Here is next week's calendar: