Market Report: FOMC is boxed in

The Federal Open Market Committee (FOMC) statement released on Wednesday was notable for deferring interest rate rises to some unspecified time in the future. 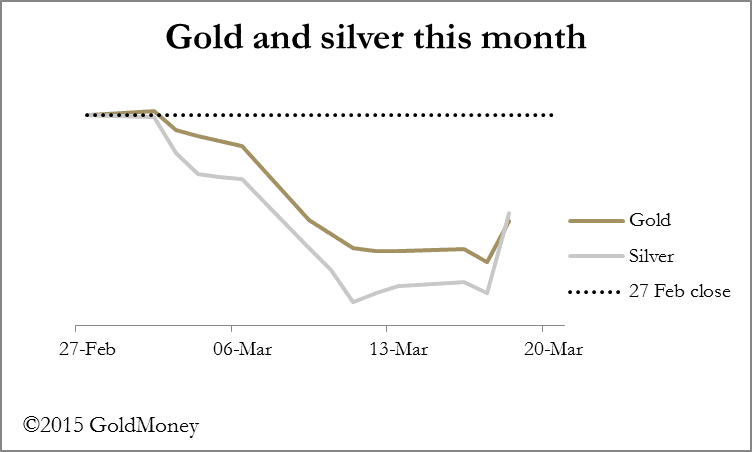 This was realistic, given the continuing strength of the dollar, downward revisions to the inflation outlook, and economic weakness in virtually all industry surveys. The Fed's obvious problem in deferring a rise in interest rates is the continuing improvement in the unemployment statistics. However these are seriously flawed: for example in February housing starts fell sharply due to the bad weather, yet seasonally adjusted non-farm payrolls for residential construction jobs were said to rise by 17,200.

It appears the Fed is boxed in, and raising the Fed funds rate would probably only serve to increase excess reserves. If so, the Fed would have to shell out interest payments to the banks at a rate it really cannot afford, given its own balance sheet is geared over 70 times. Markets seem to be slow to understand this problem: if the Fed is unable to raise interest rates (i.e. the Fed funds rate) the dollar itself is at risk.

The immediate effect on precious metal prices was to turn them sharply higher, and Open Interest on Comex has continued to climb. Gold was up a net $16 on the week and silver $0.55. Oversold currencies bounced strongly, but gave back most of their gains yesterday. The set-up is now for a bear squeeze in gold and silver, with the Managed Money category on Comex somewhat short. The chart for gold and its Open Interest is shown below. 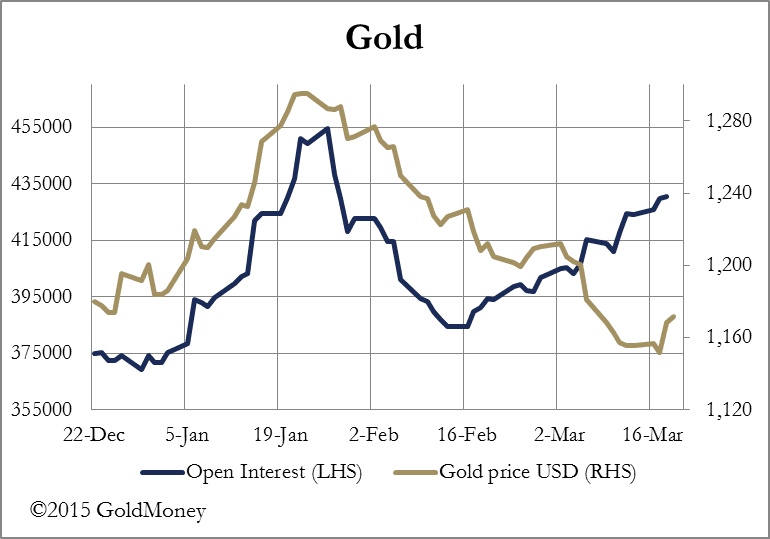 Silver has continued to resist moves to the downside, and here the Open Interest has continued its climb as well. Silver has outperformed gold, illustrated in the chart at the head of this report. 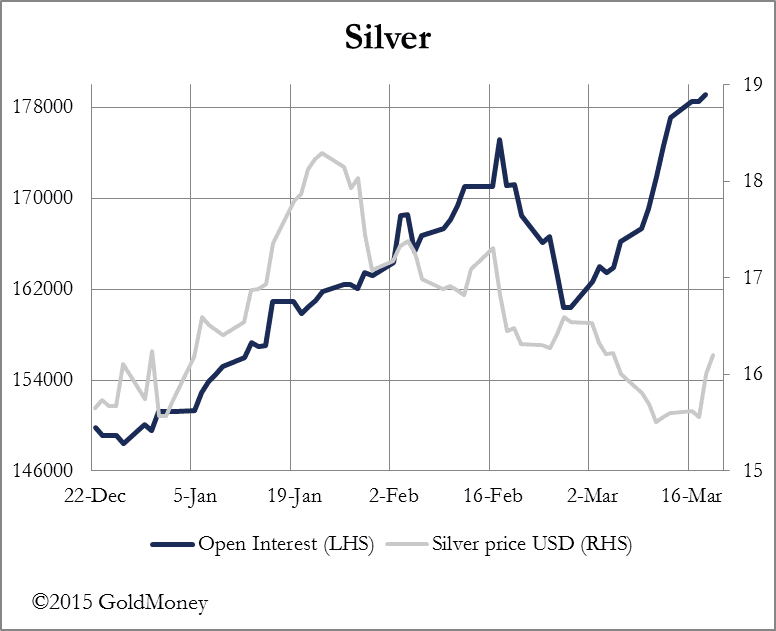 Normally falling prices are accompanied by lower Open Interest. The current divergence is therefore indicative of increased buying support, which may be enough to reverse the bear trend of the last three years.

It has been a momentous week, and rarely do so many important events occur. As well as the Fed showing they dare not or cannot raise interest rates, Greece's negotiations with the other Eurozone members are stranded on the rocks of reality. This was the week when markets suddenly realised the UK faces a general election with considerable political risk so sterling was sold heavily. The UK, Germany, France, Italy, Luxembourg and Switzerland are queuing up with probably Australia and New Zealand to become members of the Chinese and Russian led Asian Infrastructure Investment Bank, compromising NATO and Pacific alliances. Unfortunately for American hegemony, the political line-up is following an economic interest, and this is a party to which America does not have an invitation.

If all that is not enough, the London gold fix changes this morning after ninety-six years from a committee to a platform run by the International Commodity Exchange. Participants (the approximate equivalent of market makers) announced so far are Barclays, HSBC, Scotiabank, Société Generale and UBS. It is interesting that the American and Chinese houses are holding back.

GoldMoney's customers sat on their hands ahead of the FOMC announcement, turning buyers after the event, according to our dealing desk.