Despite being very overbought, gold and silver rose slightly on the week, with gold up $7.50 at $1512 in early morning European trade and silver up eight cents at $18.10. As our headline chart shows, over the last two weeks silver has nearly caught up on gold again to have risen 17.5% on the year compared with gold’s rise of 18%. 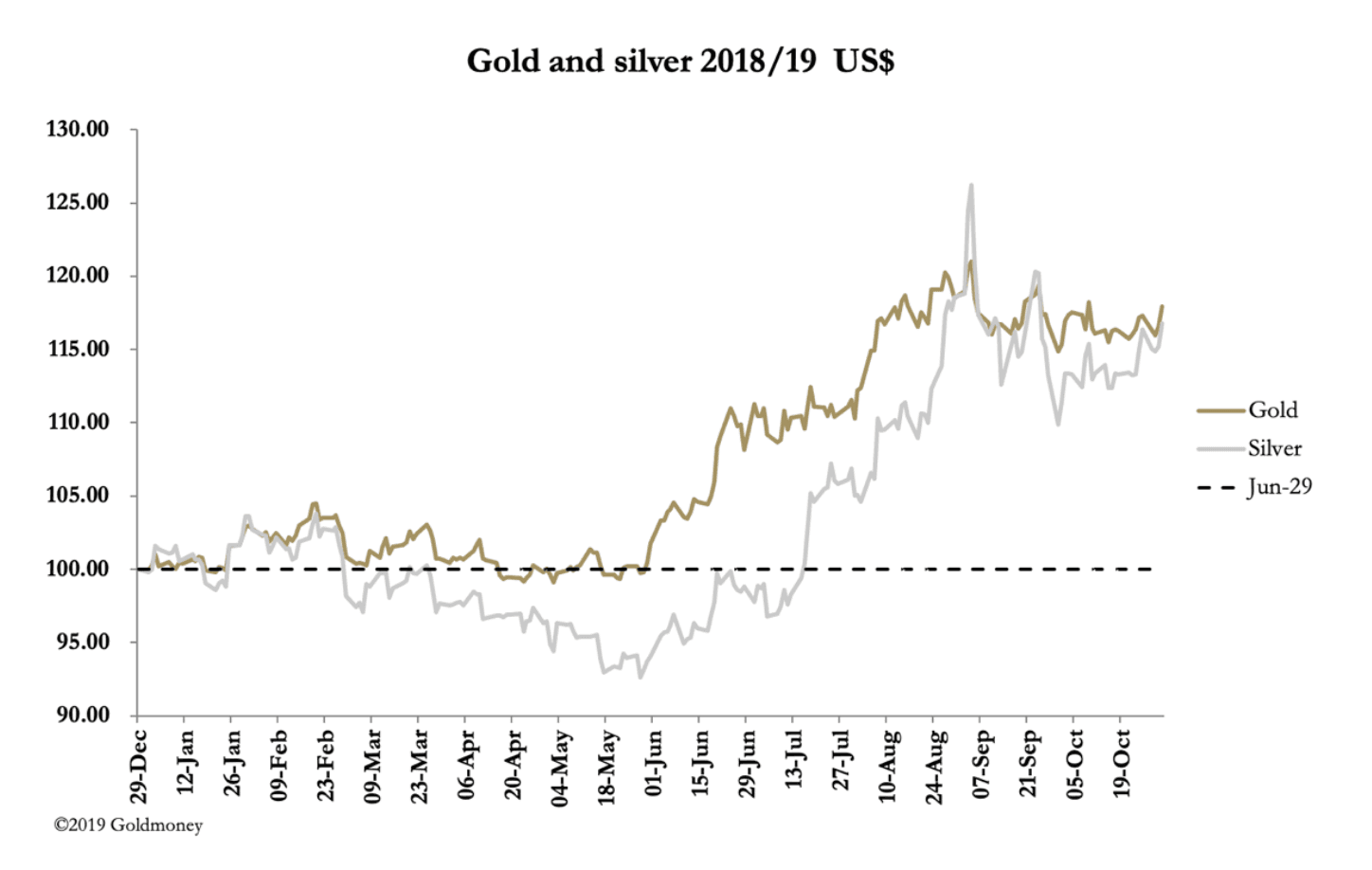 The event of the week, which was widely expected, was the Fed cutting its fund rate target by ¼% on Wednesday. Initially, gold and silver were marked down on the news, presumably on the basis that the good news had passed and therefore short-term speculators would close their bull positions. However, either the selling didn’t materialise, or buyers cleaned out the market at the lower levels. Consequently, yesterday prices recovered strongly.

As well as looking at short-term rates, gold and silver traders should keep an eye on bond yields, which have risen since August, as our chart of the 10-year US Treasury bond yield illustrates. 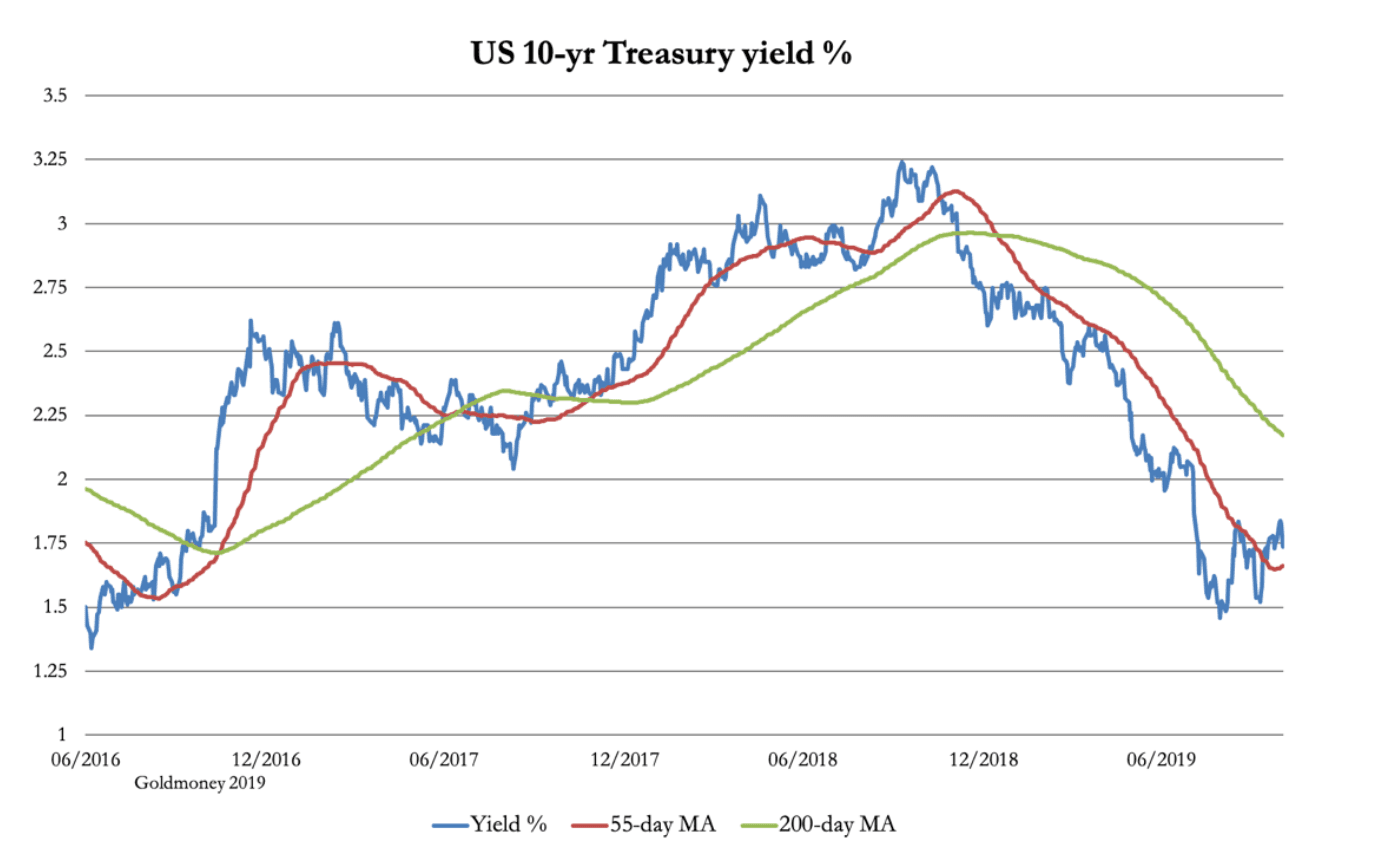 Despite the slight downturn in recent days, the yield on the 10-year T-bond is still in a consolidation pattern which needs to be resolved. But with the bond being oversold (the price having been driven lower) we could see bond yields drifting lower, helping gold and silver to make some headway in the very short term.

This may not be significant enough for gold and silver to make any meaningful headway because both precious metals are very overbought and vulnerable to a continuing correction. With gold’s open interest on Comex at record levels, the managed money category should be due for a shake-out, as our next chart illustrates. 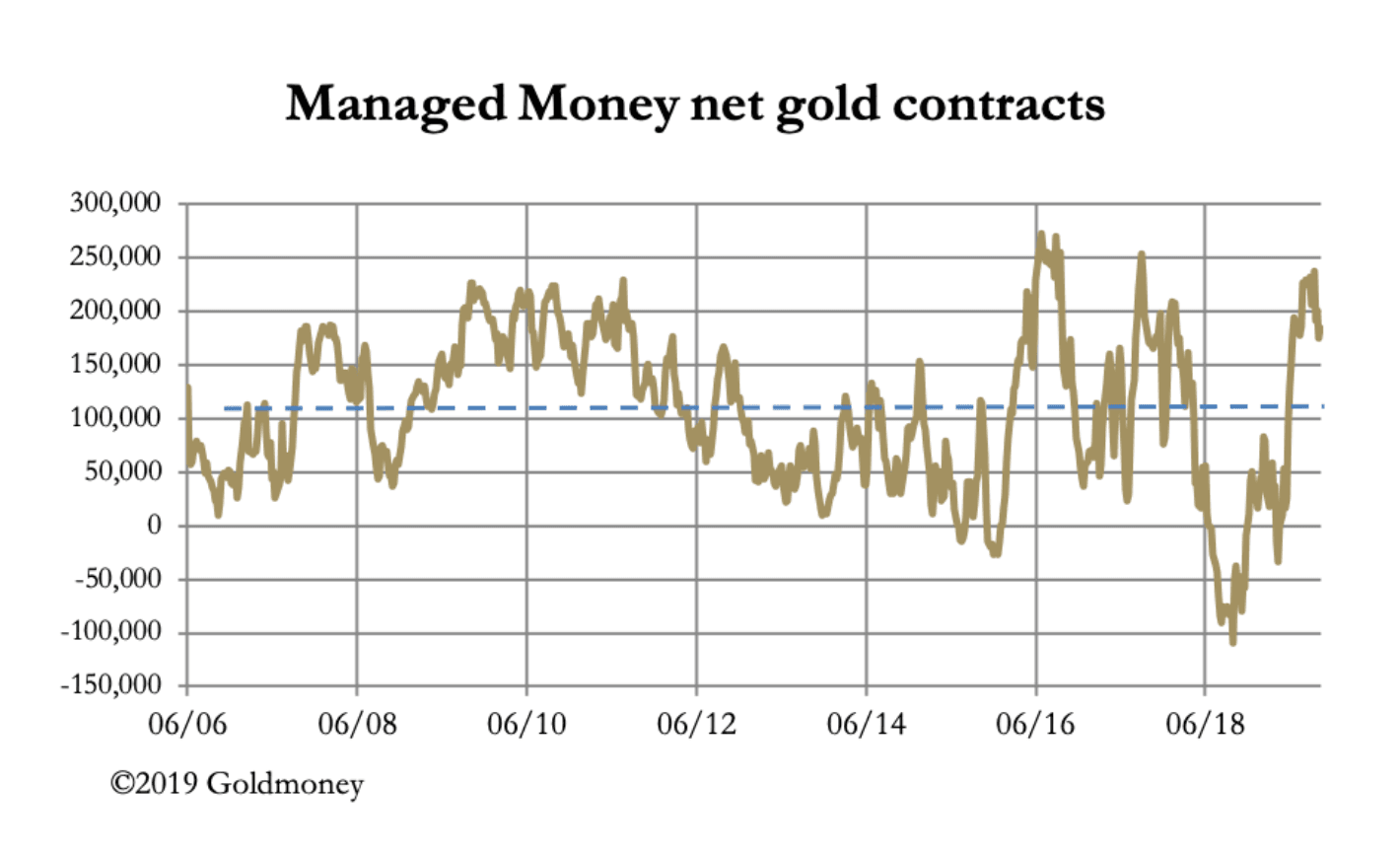 Hedge funds were net long 184,438 contracts on 22 October (an update is due after hours tonight for last Tuesday’s position). However, with open interest having increased to record levels since, hedge funds are probably record net long today.

For the gold price to advance from here is therefore asking much. The question then arises as to how strong gold’s underlying price momentum is and this is illustrated in our technical chart, below. 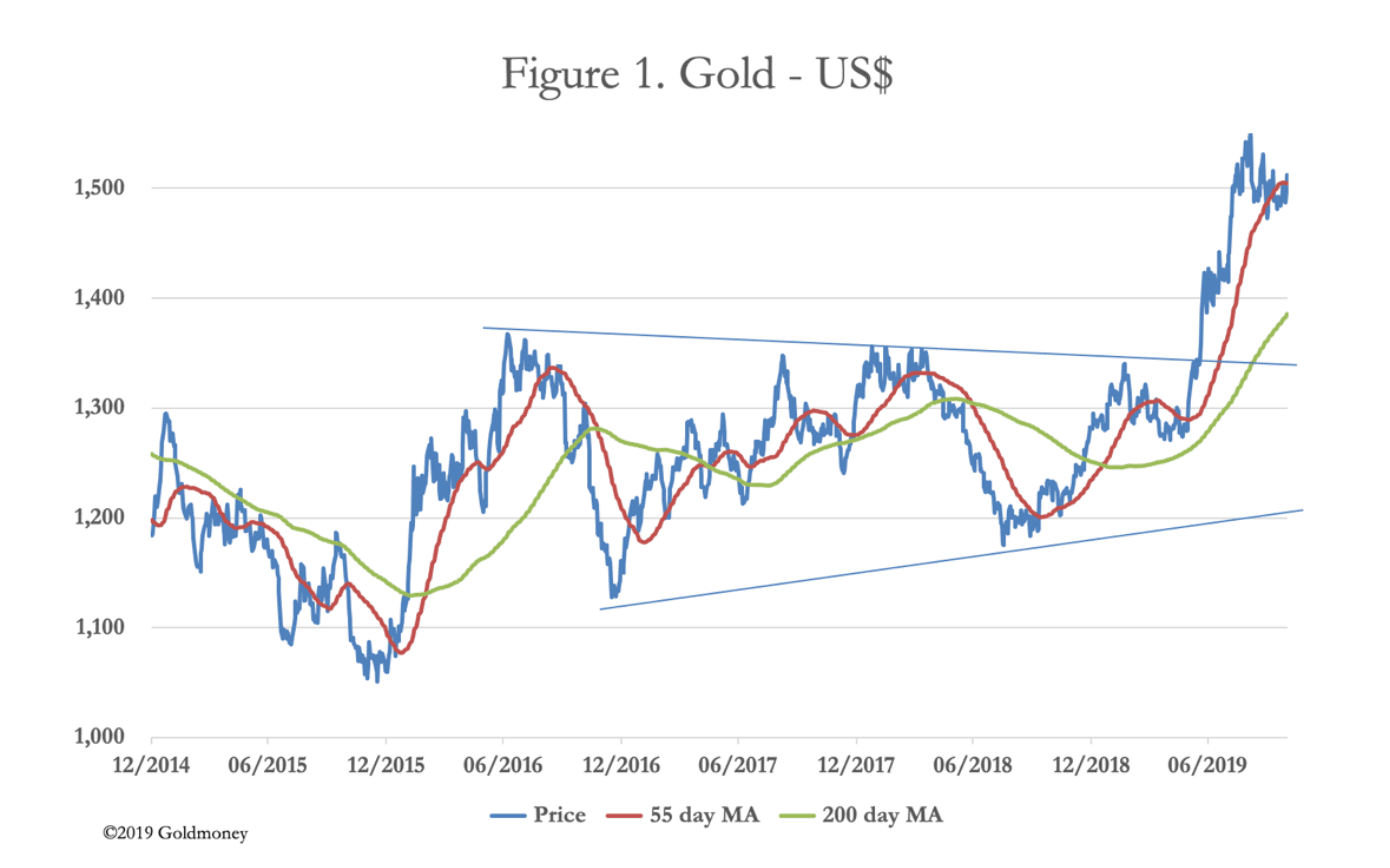 Gold has consolidated in the region of the 55-day moving average, and ideally should continue to do so for another few weeks to allow the longer-term 200-day MA to catch up. If it can do this maintaining current price levels, then gold will have a sound base for its next leg up. Without this support, any rise from here could prove to be unsustainable and require a larger correction with a pull-back towards $1450 and maybe below.

While it is tempting to call precious metals higher with their seemingly new-found strength, we must conclude that there seems to be little reason to do so for the moment.

Our final chart shows gold priced in the major currencies since August last year, when the current bull run started. 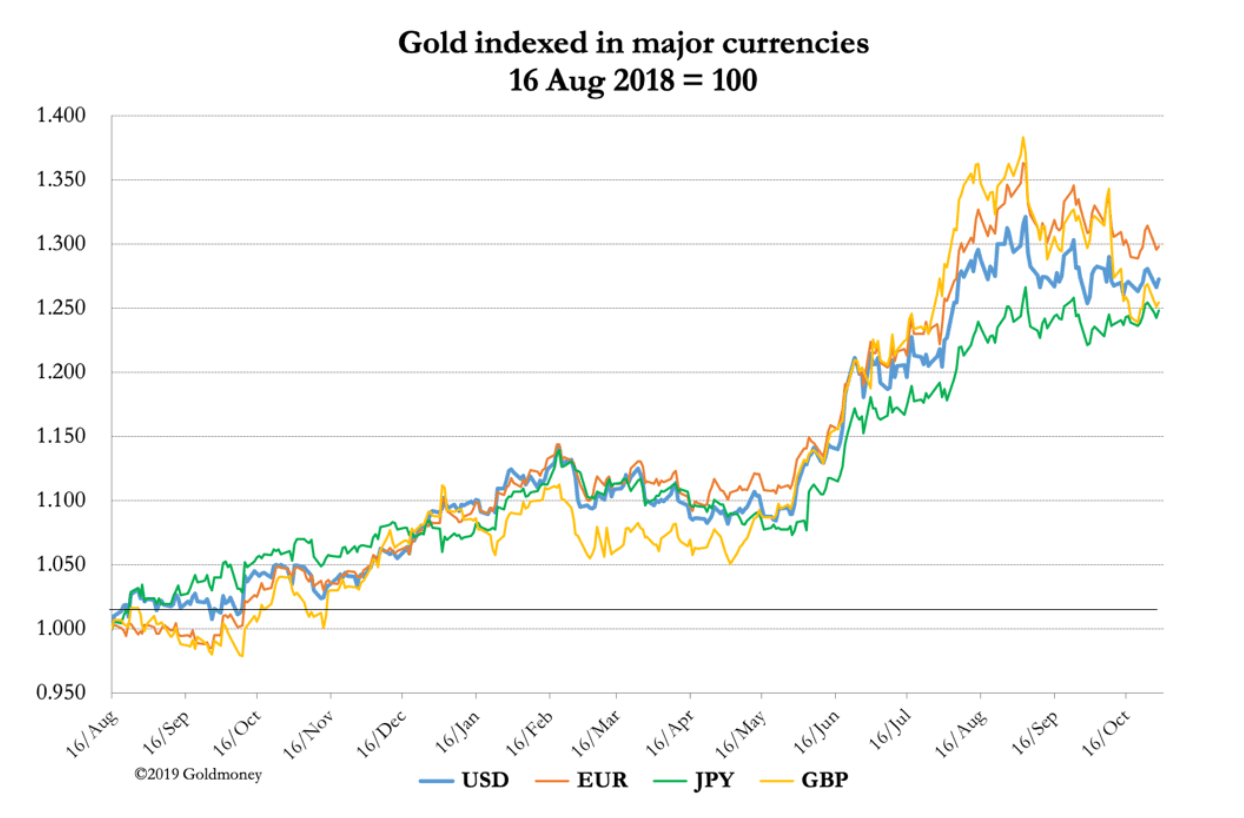